Home NEWS Local Taylor to DEDC Board: Relief route is off the radar 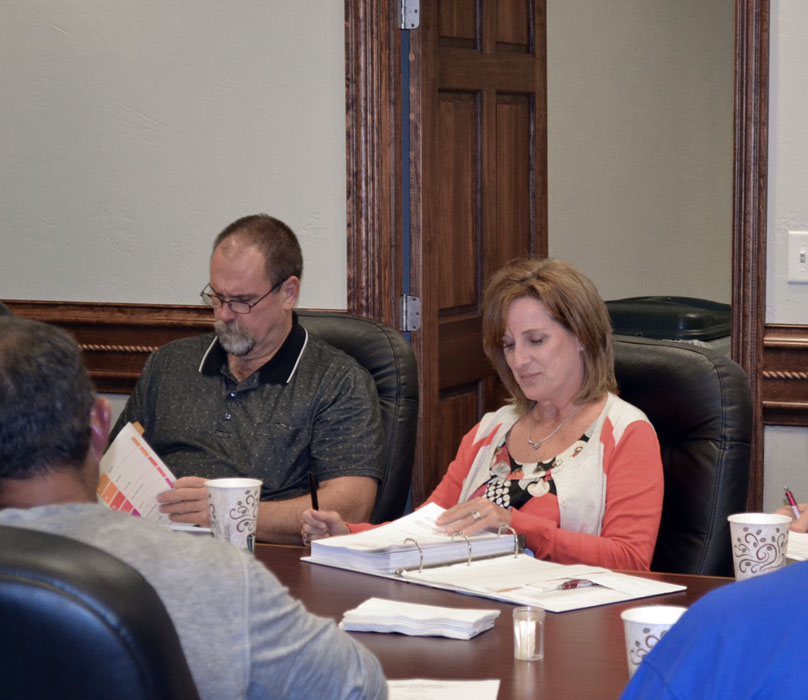 Above: Dumas City Manager Arbie Taylor, left, and DEDC Board Member Shawn Frische look over their board packets at the DEDC board of directors meeting Monday.

The city of Dumas will continue to consider the TxDOT project to replace the asphalt on Dumas Avenue with concrete but has dropped discussion about the truck relief route, City Manager Arbie Taylor said during a Dumas Economic Development Corporation Board of Directors meeting Monday.

“It’s off the radar,” Taylor said when DEDC Board President Chris Johnson asked him about the relief route. “The city commission is of the mind that the relief route needs to be something for another day. The immediate concern is how to make downtown flow better. It’s the most wise and prudent. It might be put back on the agenda in 10 years, but the time is not right to go into that.”

Taylor told the DEDC board the city will hold a public forum Sept. 10 to discuss the concrete project and plans to “send out invitations and target all the businesses along Dumas Ave.” It will be held in the lecture hall at Amarillo College, he said.

“Those will be the targeted group,” Taylor said. “It will give us a good feel about how the community feels about the project, what the concerns are going to be. We’re moving forward to getting the utilities out of the way, and now we have to decide if want to go ahead and pull the trigger and do concrete, or we do we tell TxDOT to forget it and just do asphalt.”

Taylor said TxDOT has shown “a willingness” to work with the city to schedule the work so it minimizes the disruption to the businesses.

“We can do a block at a time if we have to, and then as we expand south of the city limits, we can do bigger stretches,” Taylor said. “The city commission is thinking about what is best for the city, and they think concrete is the best solution even though it might be the most painful in the short term.”

Taylor said TxDOT won’t be invited to the public form because the city commission doesn’t want the discussion to get too technical.

DEDC will match a grant Amarillo College is pursuing, giving them the money to buy the four welders they need to complete their 10 welding stations in time for the start of their welding program Aug. 24.

“We’ve been visiting with the college on their welding program … and I told them the board would entertain looking at a matching grant program. If they can buy two, we can buy two,” DEDC Executive Director Michael Running said.

Danielle Arias, Assistant Director for Continuing Education and Workforce Development at the Moore County Campus, told the board the college was able to supply the welding shop with six stations. They had borrowed four from the East Campus, but they have to be returned.

“That would leave us short,” Arias said.

The board approved buying two welders for the college at $5,000 each.