Home OPINION It’s my money, and I want it now 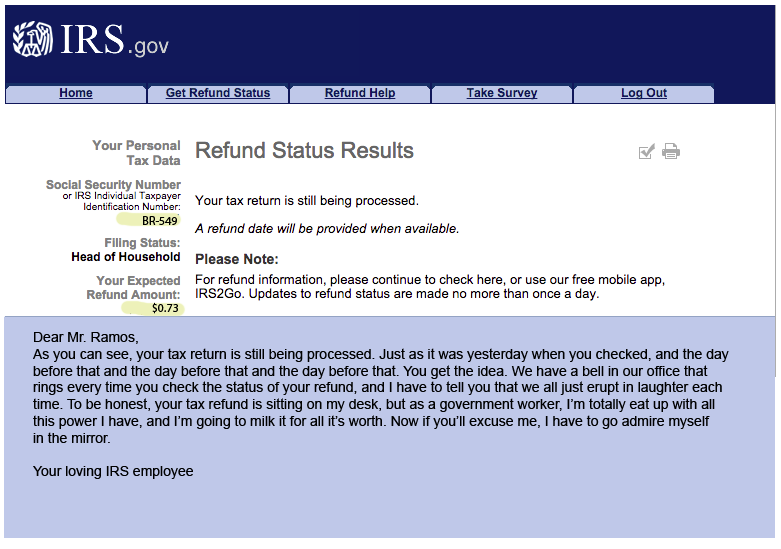 As you know, I filed my tax return Feb. 14, 2015, and since then I’ve received two letters from you that, at first, made me feel really important but are now just ticking me off. I feel I can be frank and tell you that because we’ve seem to become more than friends during the last three months.

In the first letter, you told me you needed to verify my identity because, gosh, someone might be trying to steal it. Honey, let me tell you right now no one would want my identity. Heck, I don’t even want it, so we can just cross that concern off the list right now. But I understand how much you government people care about us little folks and do what you can to protect us.

Well we verified that yes, indeed, it was me who filed that paltry return I was hoping would be enough to buy a new pair of shoes with. Pay Less is having that 2-for-1 sale again, and I had my eye on those fire engine red slingbacks. Don’t ask. But I watched that sale come and go as I waited for my return, and then you cheered me up with a second letter, telling me I had been selected for further review. Gosh, little ol’ me? I can’t imagine what part of my return required further review. The part that showed I had no income from investments or any other source other than my close-to minimum wage job? That part? Or maybe you’re just making excuses to hold my refund because you really, really like me and want to continue the correspondence. Is that it? Do we have a Fatal Attraction kind of thing going on here because if we do, I’m going to need those slingbacks to play my part.

But enough of the chit chat. Listen up. Why don’t you get off your fat government behind and put my refund in the mail, umkay? Quit worrying about my puny return and go back to work passing regulations that allow corporations to take their money offshore and not pay taxes on it. Don’t fret another second over my identity being stolen because not even a Kardashian would want it. So let’s just end this three-month affair and call it good. You’ll get over it, and, to be honest, I was never that much into you. You come with too much baggage.