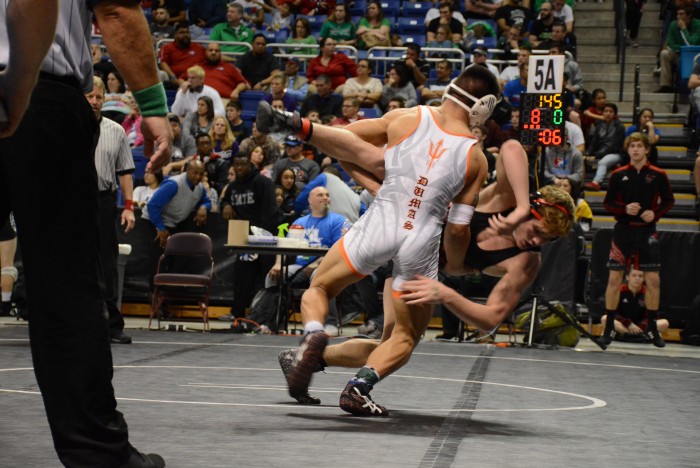 Above: Zach Garza (145) placed second at the State Wrestling Championships on Saturday in Houston.

Eight Dumas wrestlers entered the state tournament with a chance to make some noise. Five of those became all-state wrestlers by placing in the top six in their respective weight classes.

“I thought we looked really flat the first couple rounds,” Dumas coach Clint Chamblin said. “I don’t know if that was because the long trip or just freshman and first-time jitters. As a group to come back and get five placers is awesome. This tournament is such and emotional roller coaster. You can’t predict what’s going on in the mind of a teenager. It’s difficult to predict what’s going on.”

Leading the way for the Demons was junior 145-pounder Zach Garza. Garza was the lone Demon in the 2016 Class 5A UIL State Wrestling Championship finals but fell just shy, placing second. Two Dumas seniors were able to go out with a winning note as 138-pounder Talen Widener and 182-pounder Miguel Baray each won his final match for the Demons to place fifth at the tournament.

“Working hard and giving it my all in practice has all paid off,” Baray said. “I’m an All-State wrestler now.”

“It means a lot,” Widener said. “Last year I got sixth. Even though I didn’t do what I wanted to, I still did better than I did last year.”

Widener said it wasn’t easy to come back from losing a tough quarterfinals match.

“It was tough,” Widener said. “I lost in the quarterfinals in a really close match that went into overtime. It was hard to bounce back being a senior and knowing I wasn’t going to get first.”

Baray placing fifth as a senior was the culmination of a long journey.

“He didn’t wrestle as a sophomore,” Chamblin said. “We talked a lot about getting him out. We don’t have a lot of big guys. We really worked on him to get him to come out. He wrestled as a freshman and didn’t like it, so he didn’t wrestle as a sophomore. He came out as a junior, wanted to quit after Christmas break. I talked him into staying. By the end of that junior year, he bought in and qualified for state. To watch him win his last match here and get fifth at state as a senior is really special.”

Baray said it was Chamblin who brought out the passion in wrestling.

“At first (Dumas wrestling) didn’t mean anything to me,” Baray said. “Then Coach Chamblin came in and put his philosophy into our heads, and we bought in and contributed to that.”

Chamblin said Widener is one of the hardest workers he’s ever coached.

“Watching a kid like Talen Widener wrestle is awesome,” Chamblin said. “Literally no one out works that kid. He works constantly, non stop. He’s always getting with me and coach Holzworth, trying to get extra time in the room. He’s the kind of kid that every coach in Dumas knows who he is based on how hard he works.”