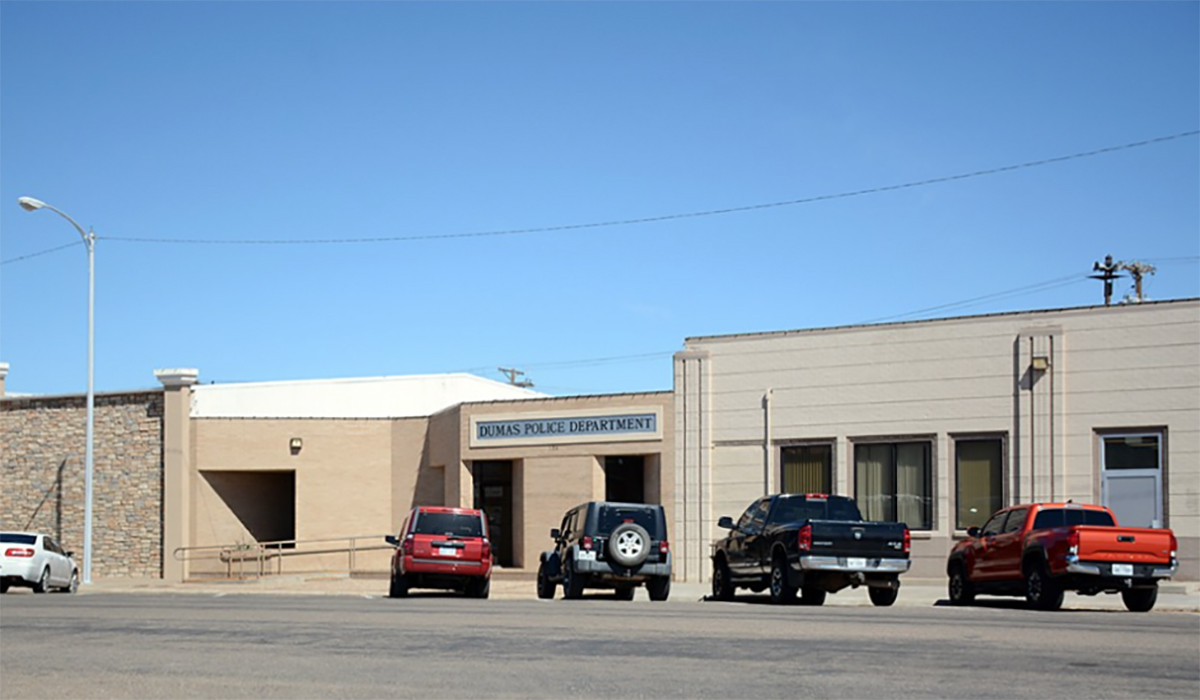 Vandals damaged 24 gas meters from the 200 block to 600 block of Oak Avenue, Dumas police reported. A homeowner called police on July 19 and said his meter and others in the alley were damaged. City employees went to check on the damage and found damaged meters along the four blocks. City Manager Arbie Taylor said it costs about $85 to replace each meter.

“That doesn’t include labor,” Taylor said. “This has been a continuing problem, and the costs add up.”

• E. 10th St. – Accident – Dispatched in reference to an accident. Contact was made with driver of Unit 2 who advised she traveling west in the 800 block of East 10th Street when Unit 1 turned north from East 10th Street to South Maddox Avenue and struck her vehicle causing LP damage to Unit 2 and FL damage to Unit 1. No injuries to report.

• 200 block S. Dumas – Check Suspicious – Dispatched in reference to a possible intoxicated driver traveling south on South Dumas Avenue. Observed a tan vehicle with matching tag and followed it to  East 10th Street. Made contact with the driver and advised him of the situation. It was determined that the driver had not consumed any alcohol and did not display any indicators of driving under the influence. Nothing further.

• 800 block N. Maddox – Reckless Driver – Dispatched in reference to a reckless driver who was traveling south on North U.S. Highway 287 and had run the complainant off the road. Dispatch advised that at white GMC truck had turned onto Success Boulevard and was seen heading south on North Maddox Avenue. The area was canvassed but was unable to locate suspect vehicle.

• 2000 S. Dumas Ave. – Check Suspicious – Dispatched in reference to a suspicious vehicle in the parking lot. Made contact with occupant, and it was determined that everything was alright. Procedural checks for wants/warrants were ran with negative returns. He was advised that the parking lot was for customers only and to park elsewhere.

• 1200 block S. Dumas Ave. – Check Suspicious – Made contact with a white 2003 Chevy truck in the west alleyway of the 1200 block of South Dumas Avenue. Identified occupants and ran procedural checks for wants/warrants. The driver was advised of COV – blocking alleyway.

• 600 block E. 14th – Criminal Mischief – Dispatched in reference to criminal mischief. Spoke with city of Dumas Parks Department. He stated that unknown person(s) started to burn the toilet paper on the toilet seat in the girl’s bathroom.

• 208 N. Dumas Ave. – Theft – Dispatched in reference to a theft of a 30-pack of Bud Light. Canvassed the area and was unable to locate male subject. Contact was made with store clerk who advised the male subject would be Hispanic, wearing a red shirt/blue jeans, and a cursive tattoo around his neck.

• 1200 block Beard – Criminal Mischief – Dispatched in reference to a criminal mischief to a vehicle. Upon arrival, contact was made with complainant, and it was learned that at an unknown time and date, an unknown object shattered the back windshield to the complainant’s 2013 Dodge Charger.

• 100 block N. Maddox – Accident – Minor accident at the above location. A 2016 Nissan Rogue was traveling north in the 100 block of North Maddox. The Nissan came to a complete stop for turning traffic. A 2005 Ford Focus was directly behind the Nissan and failed to control speed, striking the Nissan. FC to BC.

• 100 block S. Maddox – Accident – A silver 2006 Infiniti TT was traveling north in the 100 block of South Maddox and began to turn west into the 700 block of 2nd Place. The Infiniti was struck in the BL by an unknown vehicle that then fled the scene.

• 2003 S. Dumas Ave. – Theft – Dispatched to Wal-Mart in reference to a theft. Upon arrival, contact was made with loss prevention personnel who advised he had stopped Chelsea Rosalez, Ashlee Rosalez, and Yvonne Rosalez past all points of sale with approximately $39.36 worth of merchandise. A search of their bags also revealed that Chelsey Rosalez was in possession of drug paraphernalia. Citations were issued along with a CTW to Yvonne.

• E. 16th – Reckless driver – Dispatched in reference to reckless drivers. Arrived and canvassed the area for two white trucks racing south on South Dumas Avenue but was unable to locate the vehicles.

• 700 block N. Dumas Ave. – Accident – Dispatched in reference to an accident. Arrived and found a white 2002 GMC pickup, Unit 1, was travelling west out of the Love’s Truck Stop parking lot and failed to yield the right of way to a 2001 Cadillac sedan, Unit 2, that was travelling north on North Dumas Ave.

• 400 block S. Dumas Ave. – Accident – Dispatched in reference to an accident. No injuries to report. Blue forms were issued.

• 300 block E. 19th St. – Check Suspicious – Dispatched in reference to suspicious male and female subject in the store, possibly drug related. While en- route, dispatch advised that the subjects were leaving the store in a grey vehicle. Observed said vehicle and initiated a traffic stop in the 1800 block of South Meredith and made contact with subjects and advised them of the issue. Procedural checks for wants/warrants were run with negative returns. Nothing further.

• 600 block Binkley – Burglary of a Habitation – Dispatched in reference to a burglary. Arrived and spoke with the complainant who advised that sometime between July 12 and July 23, an unknown person came into her parent’s house through the backdoor and took approximately $900 in cash from a portfolio. Under investigation.

• 400 block N. Birge – Warrant Service – Traffic stop initiated on a white Chevy Aveo. Citation issued to Maximiliano Perez for No Driver’s License and warned for Failed to Signal Required Distance. Dispatch confirmed that Perez had an active warrant out of Moore County. Perez was taken into custody and booked into the Moore County Jail for Warrant CR-12-6782 Violate Driver’s License Restrictions and CR-12-6782B Violate Promise To Appear.