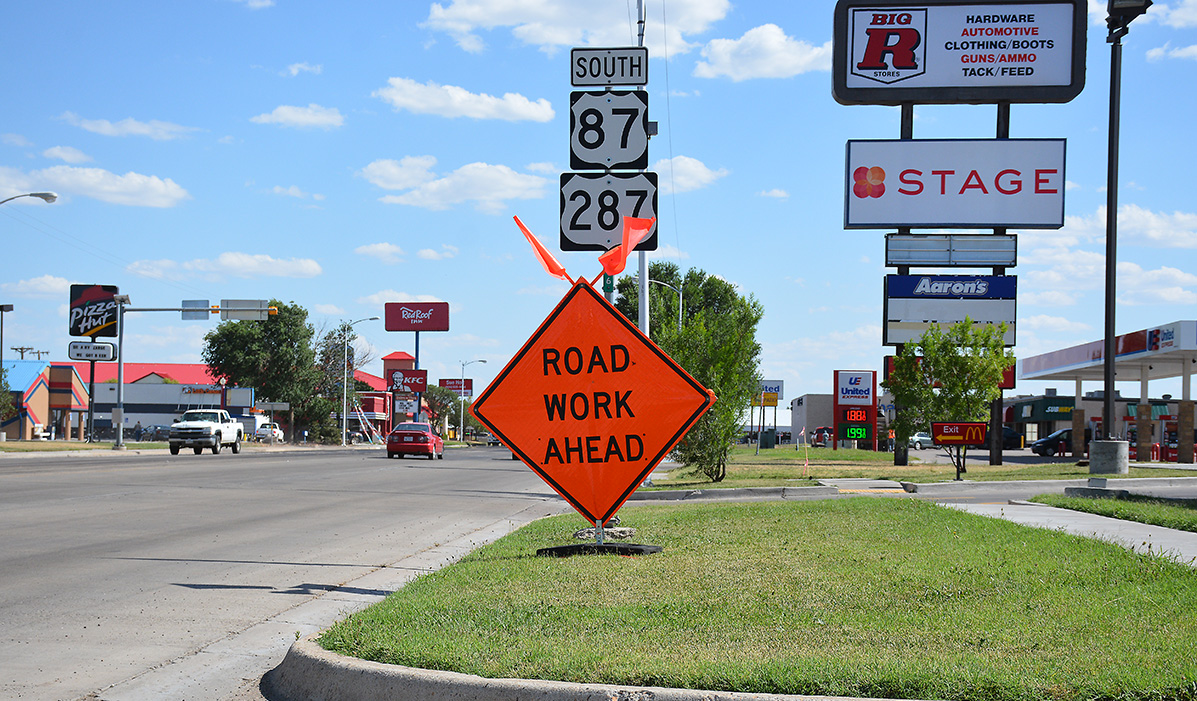 Above: TxDOT signs on South Dumas Avenue encourage drivers to be aware of the work they’re doing to mill the pothole-marked street and lay hot mix.

There was no wringing of hands. There were no prophecies of doom for the downtown businesses. Instead, the Dumas City Commission on Monday had few questions after TxDOT officials summarized their plans for two projects that have caused much angst in the community — the relief route and replacing the asphalt on Dumas Avenue with cement. Each are on TxDOT’s planning boards, but they stress the projects will be community driven and developed with the city’s input. The TxDOT officials spoke as the smell of hot mix wafted down Dumas Avenue after a day of milling the street to get rid of the car-rattling potholes.

TxDOT’s Amarillo District Engineer Brian Crawford said the state is spending $1.2 million to repair Dumas Avenue, and the job is expected to last six weeks. Crews began the work last week, working on one lane at a time from 14th Street to about 19th Street. Once that’s completed, TxDOT crews will move north of 14th Street and repair the street all the way to 1st Street. Crawford’s appearance at a City Commission was his first since his appointment to Amarillo on April 1, 2016. He spoke briefly and then asked Dumas Area Engineer Corky Neukam to explain what TxDOT is doing.

“The pavement is so wide that we have to do it in four passes,” Neukam said. “We’re milling 3 inches and laying 61,000 square yards of hot mix. We’ll follow it with a seal coat program to seal out the moisture.”

Neukam then told the commissioners TxDOT’s Director of Transportation, Planning and Development Gus Khankarli would speak about TxDOT’s plans to lay concrete on Dumas Avenue from around 19th Street to 1st Street. Khankarli said the $18 million project is scheduled to begin in fiscal 2018, which begins September 2017, and TxDOT’s project tracker shows the project will be ready to bid June 5, 2017. First, though, the state and the city of Dumas have to determine who will pay for moving the utilities buried under Dumas Avenue. Dumas officials submitted documents they say shows the utilities were in place when TxDOT took possession of the street in 1932. Khankarli said they’re half way there.

“We have been working with the city and reviewing the paperwork they submitted,” Khankarli said. “Through discussions with Arbie (Dumas City Manager Arbie Taylor) and the city’s engineer, I believe we are comfortable with recommending the water line was in place from the courthouse north to where the old water tower was.”

The city, though, has yet to prove the lines were in place south of the courthouse.

“We’re still waiting for the city to make a proper evaluation,” Khankarli said.

Mayor Pro Tem Dr. David Bonner asked about the possibility of enhancing Dumas Avenue’s sidewalks, given they’ll be replaced during the cement project. He suggested placing tiles in the sidewalk that might provide historical or other information about the city and businesses, which is something he said a city in Oklahoma did. Crawford said it’s possible, but the city would have to pay for it. Khankarli said Bonner’s idea is an example of how TxDOT encourages the city to partner with them in the planning of the project.

And then there are the traffic lights on Dumas Avenue, whose numbers some people question.

“We’ve requested a traffic study to be done through town,” he said. “We need to make sure all the signals are warranted, and if they’re not then we need to integrate that into the findings.”

But the project that’s drawn the hottest fire, the one that spurred some local officials to amass their power in several attempts to stop it, elicited little response and questions from the commissioners. The relief route expected to be built south of Dumas has caused little stir since the city passed a resolution in February 2015, authorizing TxDOT to move forward with a feasibility plan to build it. The Moore County Commissioners’ Court also passed their resolution in February 2015. Khankarli said he has spoken with Moore County Judge Rowdy Rhoades about forming a work group that would include people from the city, county and various organizations to generate ideas for the relief route, including its location.

“Anything we do is community driven,” Khankarli said. “We want to make sure our (TxDOT) role is as a facilitator.”

Khankarli later said once the work group meets and makes recommendations, there will be public meetings to further develop plans. Public hearings with follow that.

“When the community leaders, the stakeholders, say, ‘This is what we want,’ we move to public meetings,” Khankarli said. “Having an integrated plan will accelerate the relief route.”

The relief route has $5 million in federally earmarked money, but it’s not enough. The project hasn’t been launched because once it is, the clock begins to run, which forces TxDOT into a schedule not augmented with the required studies and preparations.

“Let’s get the studies done so we can get the right of way,” Khankarli said. “But it’s important to get the work group going and then have the public meetings and hearings, and then we can determine how we’re going to fund the project.”