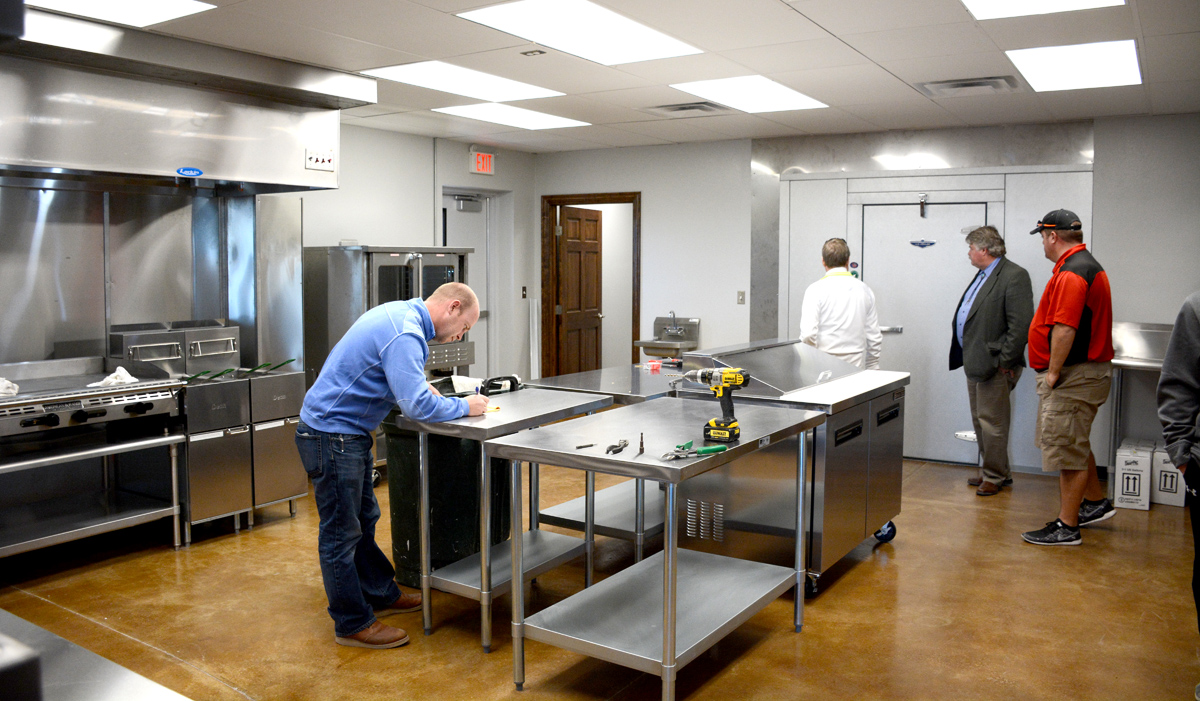 The heating and air are humming, the stained concrete floors are gleaming, and the kitchen is waiting for a cook to walk in and start slinging. Contractors finished their work on the new restaurant at the Moore County Airport on Monday, right on deadline, and a tenant is expected to open the restaurant early February.

The construction agreement between Moore County and Willis and Sons Inc. said work on the 3,200-square-foot restaurant would begin May 31, 2016, and Willis had 210 days to finish the job. On Friday, three days before the 210th day, Moore County Judge Rowdy Rhoades, Moore County Commissioner Milton Pax, Moore County Attorney Scott Higginbotham and Airport Manager Brandon Cox walked through the restaurant as workers moved through the last stages of installing kitchen equipment and readying the building for approval. As the deadline hours approached, Greg Willis and Justin Willis directed their crew with calm control, each pitching in to help.

“There was still quite a bit to be done when we walked through the restaurant,” Rhoades said. “I wasn’t sure they would make it, but it all came together. They (Willis and Sons Inc.) did a great job. The restaurant is very nice.”

Moore County accepted Willis’ $289,200 bid to build the restaurant on May 9, 2016, and the county commissioners budgeted another $41,200 for the kitchen appliances, a grease trap, a fire suppression system for the hood and $13,500 for a septic system. However, the cost to install the septic system came in higher than Willis expected, an issue the commissioners covered during two subsequent meetings.

Willis’ bid didn’t include installing the septic system. Another contractor would do it, but his costs turned out to be higher than the figures he had given Willis, figures Willis then passed on to the commissioners. During a Moore County Commissioners Court meeting Nov. 14, 2016, Willis gave the commissioners two bids, one for $69,461 from Precision Excavation LLC and another for $43,180 from NexGen. It provoked a discussion with the commissioners about where the money would come from, and they voted to table the matter until a special called meeting on Nov. 21, 2016, giving Willis and Cox time to research funding options for the septic system.

At the special called meeting, John Frantz with Frantz Resource presented a substantially lower bid. Frantz told the commissioners he could install a septic system that would accommodate a 58-seat restaurant for $28,870 if Moore County Road and Bridge Department would dig the holes for the tanks. Willis agreed to contribute $3,000 to help pay electrical costs, and the commissioners approved Frantz’s bid.

And the restaurant is now ready for its tenant to move in.

Tommy Ireland signed a two-year lease with Moore County and is expected to open Hoggs BBQ in February. In his proposal to the commissioners, Ireland said the restaurant would be open Monday-Saturday from 6 a.m. to 9 p.m. and from 6 a.m. to 2 p.m. on Sunday. The menu will include brisket plates, ribs, smoked ham, sausage, chicken, chicken fried steak and other dishes. Ireland has cooked for the Dumas Noon Lions Club for two years, and he told the commissioners he has operated a barbecue catering business for three years. He plans to sell beer and wine at the restaurant.

The lease stipulates Ireland must maintain $500,000 in comprehensive general public liability and property damage insurance per person and $1,000,000 combined single limit per occurrence.

Moore County used $186,940 from two Routine Airport Maintenance Program grants, one from 2016 and another for 2017, to help pay the restaurant’s building costs. Another $16,000 came from the county’s building fund, and the commissioners used $7,823 left over from the recent construction of a hangar at the airport. With the additional cost of the septic system, the county paid $359,270 for the restaurant’s construction, $10,270 more than the budgeted amount.