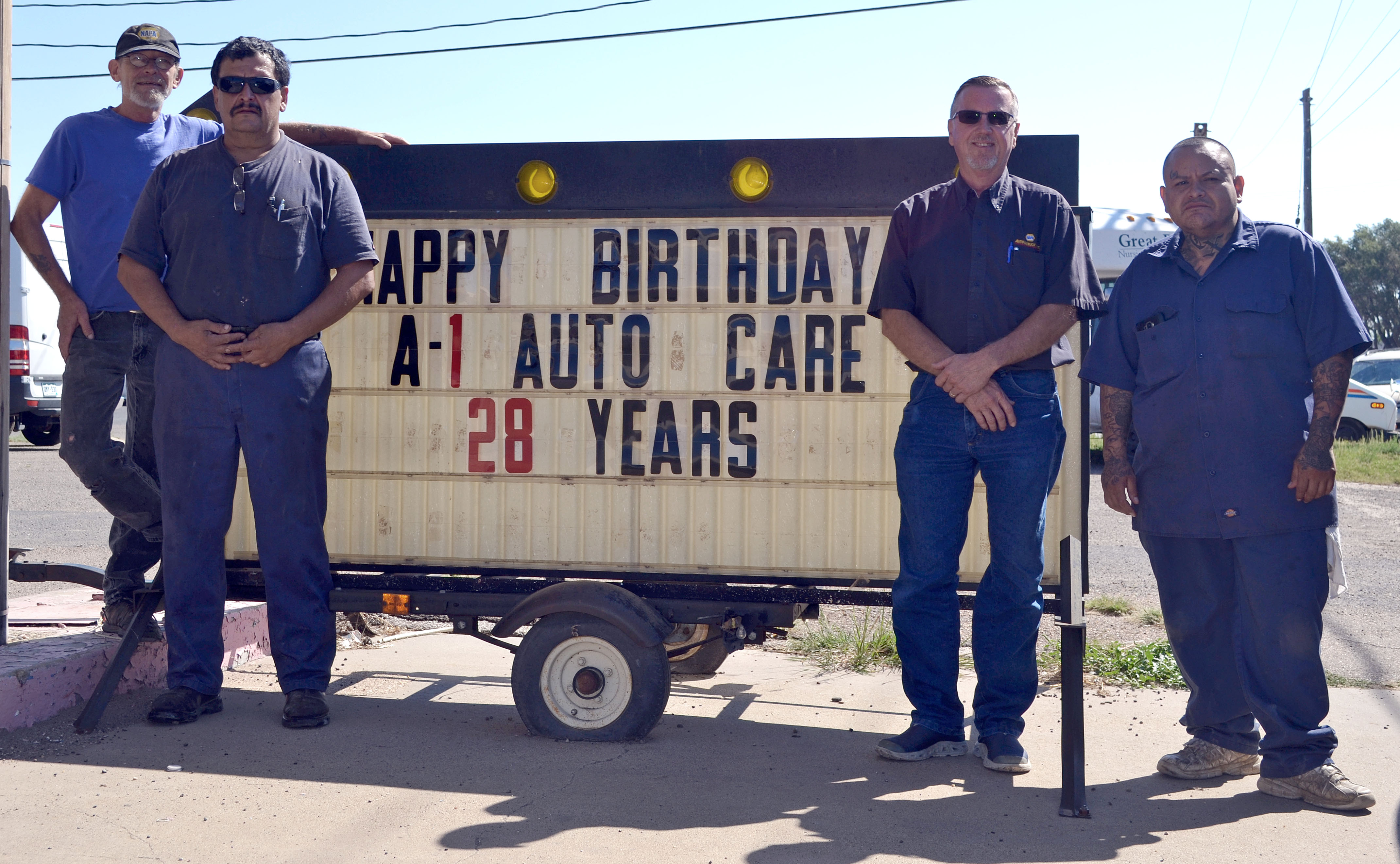 Above: James “Sweetie” Green, owner of A-1 Auto Care Inc. recently received a 5-star rating for customer satisfaction and service. Green also is famous for the messages and jokes he posts on the sign in front of the business. From left, employees Bert Butler, Daniel Margas, Green and Joe Hernandez.

When James “Sweetie” Green opened his auto care business on East 1st Street 28 years ago, he spoke with two of Dumas’ most successful businessmen, Wayne Edwards and Troy Potter. Both of them offered the same advice: treat people right and be honest. And Green has. That commitment to service recently earned A-1 Auto Care Inc. a 5-star rating from a company that monitors customer satisfaction, a reflection of the service Green has come to be known for — taking care of the customer.

“He really takes of everyone, especially the elderly,” Laurie Green, his wife of 38 years, said. “He’ll go to their homes to see about their vehicles. He’s known for quality service but also for caring about his customers.”

That’s not all Green is known for. For years, he has posted messages on a sign in front of his shop, some of them jokes and some of them political messages that go viral. After years of being shared on social media, they’ve come to be identified with him and his business.

“You know, I bought that sign years ago as a way to advertise specials I was running,” Green said. “I’d put things on that sign to try to get people to come in, and no one paid attention to it.”

Then one day he put a joke on the sign.

“Oh my gosh. People started calling me and stopping by,” Green said. Now I get calls from all over the country because people stop and take pictures of what I’ve put on the sign. Some of the callers support me, others not so much.”

Recently, Green’s sign featured a joke about Donald Trump, and it went viral. It has currently been shared more than 72,000 times on Facebook and was featured on Mad World News. It’s just Green having fun, just like the fun he has had owning his business.

“I wouldn’t change anything,” he said. “I started out in high school back in the ’70s working in gas stations and washing cars at Owens Ford. I evolved into a mechanic over the years and was lucky enough to work for people like Troy Potter who taught me so much.”

Green said he moved up from washing cars to being a mechanic’s helper at Owens Ford. Then one day a mechanic quit, and the service manager asked Green if he wanted the job.

“I didn’t even own any tools,” Green joked. “I didn’t know what I was doing, but the other mechanics guided me. I remember my first job was to overhaul a Thunderbird’s engine, and I was scared to death. But, you know, I guess it turned out all right!”

Today, Green focuses on the advice Potter and Edwards gave him, adding his own awareness that it’s important to offer a fair price, something, he says, is affected by the growing costs of buying the computers needed to service today’s vehicles.

“It’s expensive to be in business today, but I do all I can to keep prices down,” Green said. “It’s crazy how much money people spend on cars these days, but it’s also crazy how much it costs to work on them.”

Green has three full-time employees: Joe Hernandez, Daniel Margas and Bert Butler. The training they receive from their experienced boss contributed to the 5-star rating, and, together, they offer full auto repair at 224 E. 1st Street. And while you’re waiting for your car to be fixed, you can entertain yourself by reading the sign.

Who knows what he’s going to put on it next.