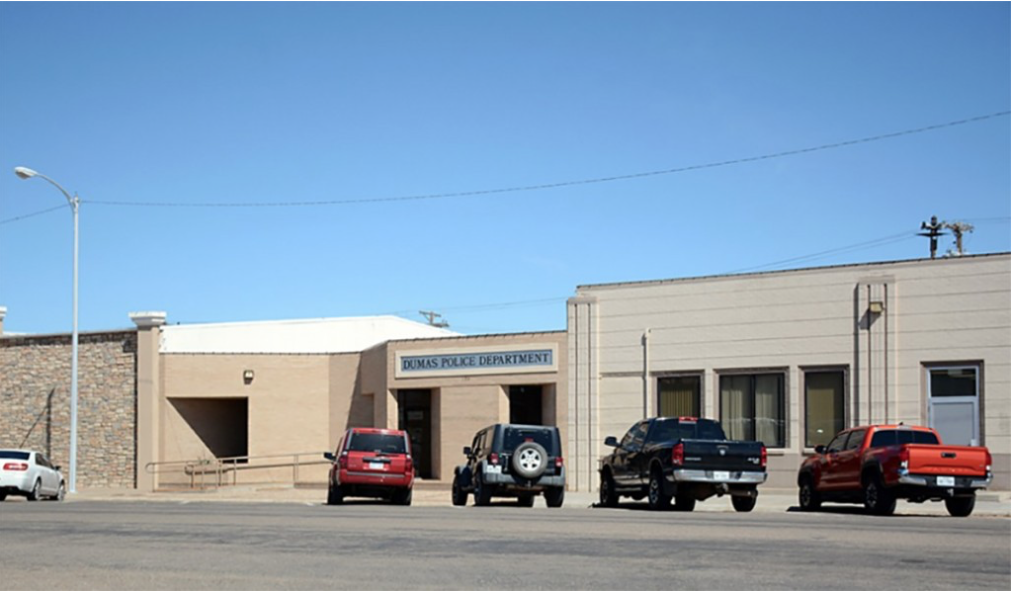 A woman ran off with $230 worth of lottery tickets from a store Aug. 15, Dumas police reported. She was wearing a Batman shirt, basketball shorts and has short hair, the report said. She ran out and got into a white vechicle that was parked behind the store.

1. 2003 S. Dumas Ave. – Accident – A white Freightliner Tractor towing an enclosed van was exiting the unloading ramp on the north side of Walmart. A 2015 blue, Mitsubishi Outlander backed without safety, traveled south and struck the passenger side of the tractor. No injury.

3. 400 block E. 1st –Traffic/Warrant Service – Conducted a traffic stop for expired registration. Passenger Danny Blackwell had a warrant out of Potter County for failure to serve weekends, 143710-1. Blackwell was transported and booked into Moore County Jail without incident.

4. 1600 block E. 7th – Found Property – Found property at the above location. LG cell phone was booked in at the Dumas Police Department.

5. 400 block S. Birge – Found Property – Found property at the above location. LG white headphones were booked in at the Dumas Police Department.

6. 1500 Durrett – Accident/Hit and Run – Flagged down at the above location in reference to a hit-and-run accident. Suspect vehicle, white 2000 Dodge Ram, was located in the 100 block of E 16th. Contact was made with driver, Omar Vazquez Gonzalez, who advised he had fled the scene of the accident because he was scared. Gonzalez was arrested and booked in at the Moore County Jail for Failure to comply duty on striking unattended vehicle =>$200.

7. 400 block Hickory – Burglary of a Motor Vehicle – Dispatched in reference to burglary of vehicles. Contact was made with complainant who advised sometime between 8 p.m. on Aug. 15, 2016, and 8 a.m. Aug. 16, 2016, unknown subject(s) stole her wallet containing DL, Social Security card and debit card from her 2009 Volkswagen while it was parked in her driveway.

2. 130 block S. Meredith – Theft of Service – Officers responded to a report of theft and found a resident had their water meter removed for non-payment. The suspect rigged a hose in place of the meter and will be charged with Theft of Service.

6. 100 block W. 1st – Check Suspicious – Dispatched in reference to a suspicious vehicle driving through the alley. Arrived at location and patrolled the area but was unable to locate vehicle.

1. 400 block N. Dumas Ave. – Power Lines Down – Dispatched in reference to a power line being down. Officers arrived on scene, and it was learned electrical wires were pulled, causing a light pole to get knocked down. Excel Energy responded.

1. 10750 US HWY 87/287 – Traffic Obstruction – Dispatched to the above in reference to debris in the roadway. Arrived and found a large construction sign lying in the north bound lane of traffic. The sign was picked up and put back on the shoulder.

2. 400 block N. Meredith – Unauthorized Use of a Motor Vehicle – Dispatched in reference to a UUMV. Contact was made with complainant, who advised that sometime between 10 p.m. on Aug. 18, 2016, and 6 a.m. on Aug. 19, 2016, unknown subject(s) stole his red 2001 Ford ranger while it was parked curbside in front of his residence. The vehicle was later recovered in Kansas.

2. 2003 S. Dumas Ave. – Theft – Dispatched to the above location in reference to lost property. Contact was made with the complainant who advised that earlier this day she accidentally left her purse in the shopping cart and left the store. She then returned to look for her purse she was unable to locate it.

3. 700 block N. Dumas Ave. – Accident – Dispatched in reference to a motor vehicle accident in the Love’s parking lot. Unit 1 & Unit 2 (semi w/ trailer) were unable to back up safely into a parking lot striking Unit 3. Unit 2 had 5-RBQ-1 damage. Unit 3 had 9-LP-1 damage. No one was injured, insurances were exchanged.

4. 700 block Zauk – Public Intoxication – Dispatched in reference to a welfare check on a subject who appeared to be sleeping on the side of the road. Upon arrival, contact was made with Rayellen Fortenberry who was found to be intoxicated. Fortenberry was arrested and booked in at the Moore County Jail for Public Intoxication.

5. 1300 block S. Birge – Warrant Service – Warrant service at the above location on Charity Michelle Dewitt. Warrant was confirmed and Dewitt was arrested and booked in at the Moore County Jail for Potter Co Warrant#66665-C Probation Violation.

5. 200 block Pine – Burglary of a Habitation – Dispatched in reference to a burglary that had just occurred. The complainant stated she came home and found that unknown person(s) had broken the window on the west side of the residence, entered and went through her belongings.

6. 200 block Pine – Warrant Service – Officers spoke with Rogelio Acosta in reference to the burglary at another residence on Pine. He was found to have warrants for no inspection. Warrants were confirmed, and he was booked into the Moore County Jail.

8. 200 block Spruce – Traffic/Warrant Service – Conducted a traffic stop for improper turn in the 200 block of Spruce. Driver Tyler Tims found to have outstanding warrant through Moore County for Poss. of drug paraphernalia (#CR-15-1096) and Fail to appear (#CR-15-1096B).

1. 100 block S. Maddox – Accident – Dispatched in reference to a minor motor vehicle accident. No injuries. Unit 1 was backing up and struck Unit 2. Unit 1 had 8-BL-1 damage. Unit 2 had no noticeable damage. Blue forms were issued.