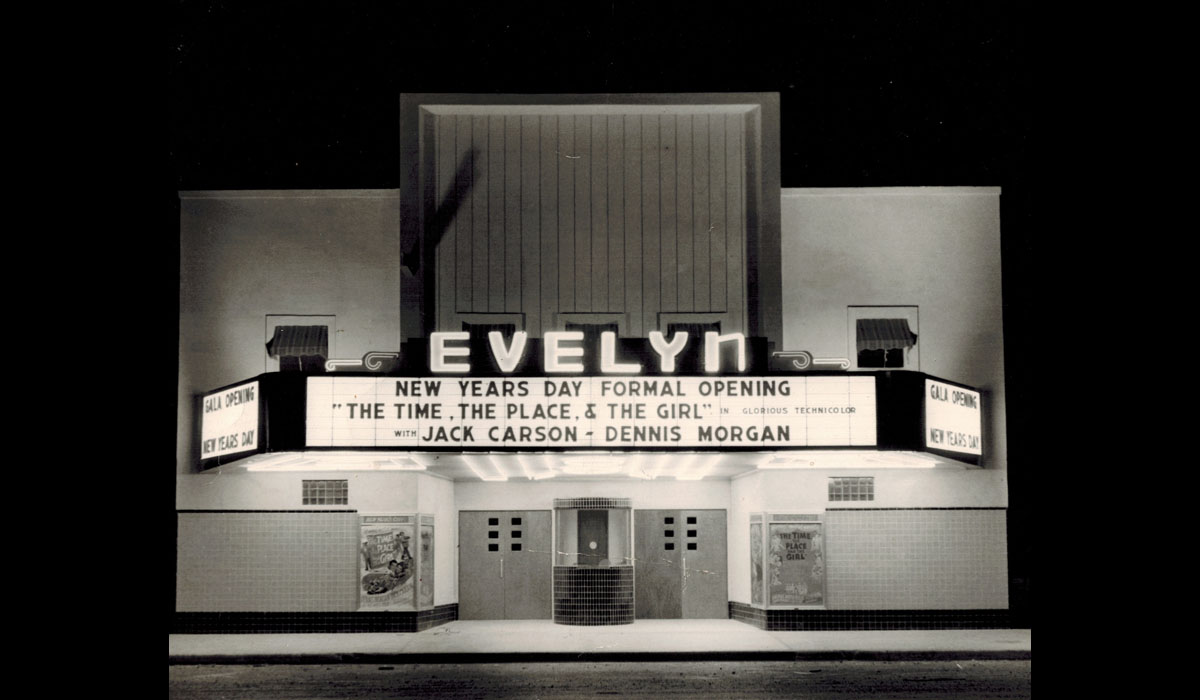 Above: The Evelyn Theatre opened Jan. 1, 1947. This photo shows the theater on opening night, 70 years ago. It was formal affair, with the women wearing gowns to the opening. (Photo Courtesy Randy Nies)

She’s a little long in the tooth, but signs of her regal birth are still evident. Those who knew her in her early years remember her brilliance, the finery and glamour that set her apart from her neighbors. Younger people see only a tired dowager in need of a facelift, a has-been who maybe should go quietly into the night. But the Evelyn isn’t going anywhere, and she will soon get a restoration that will again make her the diamond on the courthouse square.

The Dumas City Commission on Monday approved a Dumas Economic Development Corporation resolution that will make $90,000 available to renovate the Evelyn Theatre. According to the resolution, the DEDC will “provide reimbursable funds for improvements not to exceed $75,000 and a Re-Du-It in Dumas reimbursable amount of $15,000 for exterior improvements. That’s good news to Randy Nies, the Evelyn’s owner, who was considering closing the theater shortly after its 70th anniversary on Jan. 1, 2017.

“The Evelyn needs work, and I can’t do it on my own,” Nies said in an earlier interview. “I’ve put in tens of thousands of dollars over the years for improvements to keep the theater open, but I’m at the point where I can’t do it anymore.”

DEDC executive director Mike Running knows it, and he mobilized a plan, called Project Popcorn, to help Nies keep the Evelyn open, telling the city commissioners an improved theater is not only a quality of life issue, but it will also have an economic impact on Dumas.

“The current economic impact the theater has on us now is $1.7 million to $2.3 million over a 10-year period,” Running told the commissioners. “If he (Nies) increases his ticket sales by 10 percent, he will increase the number of visitors to Dumas by 3 percent.”

Running said that increase could have an additional economic impact of more than a million dollars, and it would help stop the leakage of entertainment dollars to Amarillo, which he said is more than $4 million a year when taking into account other entertainment venues. And forget trying to draw a company who would build a multi-screen theater in Dumas. Those companies are looking for a condensed population of 100,000 or more, Running said.

“We’re seeing the twilight of small-town theaters,” Running said. “The ones succeeding are doing so because of community investment.”

To get the renovation funds, Nies will have to agree to a five-year performance agreement with the DEDC. If the Evelyn shuts down, Nies retains possession of the theater’s equipment, but the DEDC can buy the business after considerations of the appraised value and the incentive amount. The resolution includes other stipulations, including a requirement that Nies keep the DEDC notified of his renovation plans, and the DEDC will have to approve the plans.

“We’re not going to just cut him (Nies) a check,” Running said.

Commissioner Bob Brinkmann, who also is on the DEDC board of directors, said “this is one of my favorite projects we’re working on.”