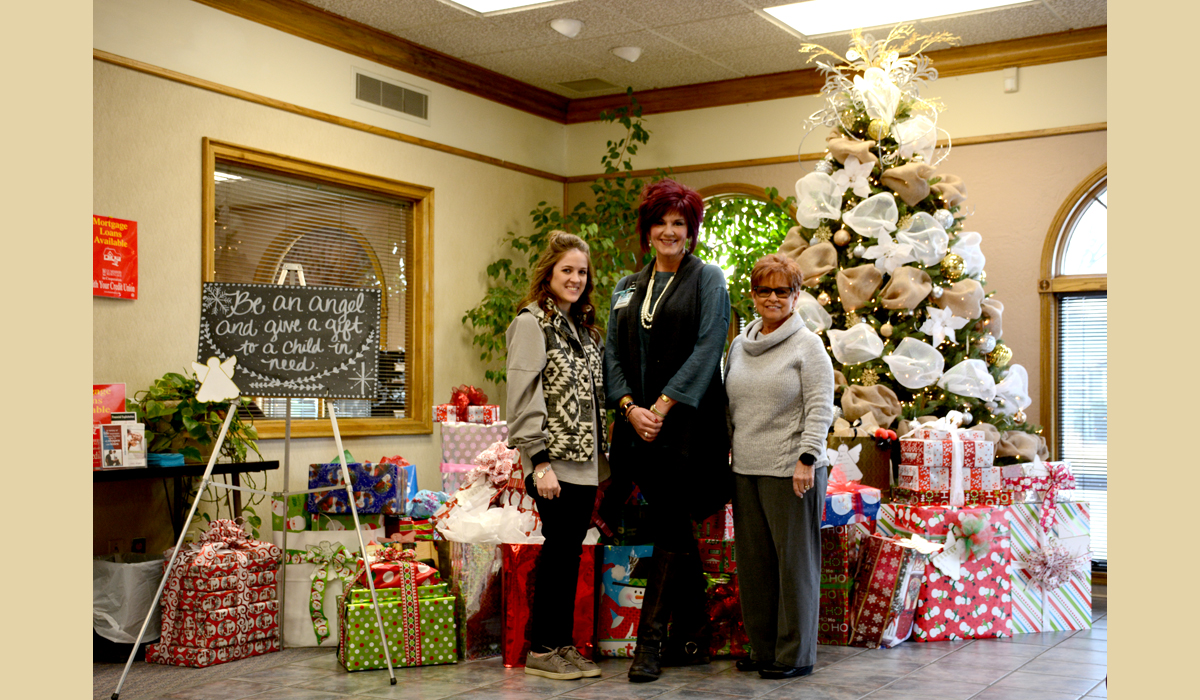 Above: From left, CASA 69 assistant director Evinn Wyatt, CASA 69 volunteer Bethany Scroggins and CASA 69 executive director Edye Cunningham get ready to load presents for about 52 children. The gifts were left by people who took angels from the Angel Tree at Shamrock Federal Credit Union.

The presents were beautifully wrapped, and until Thursday, they laid beneath an equally beautiful Christmas tree at Shamrock Federal Credit Union. But it wasn’t just a Christmas tree, it was an Angel Tree adorned with 52 angels that represented children who needed a little help to get through what could have been a Spartan Christmas, something some caring people in the community weren’t going to let happen.

From the first week in November to Dec. 13, people took the angels on which a child’s gender, age, clothing sizes and other information were listed. Guessing by the size of some of the packages, caring people went further and bought gifts that exceeded what was on the angel. The gifts went to children who are under the guardianship of CASA 69, and the executive director, Edye Cunningham, said the gifts will mean the world to the children.

“It’s going to be overwhelming for the children to see their wish list given to them — and with no strings attached,” Cunningham said. “To have something of their very own, things they asked for or wished for is going to give them the assurance that someone cares about them and is trying to make them happy. Most of them will receive everything they asked for.”

The Angel Tree was Janet Garcia’s idea. She’s a loan officer at Shamrock Federal, who for a couple of years, has reached out to help people during the Christmas holidays. In 2014, Shamrock Federal delivered care packages to every resident in both of the city’s nursing homes, and they took 52 stuffed stockings to Safe Place last year.

But this year, she wanted to do something for the children, and the Angel Tree is the result of her kindness. The children who will receive gifts are with relatives, in foster homes or in residential treatment centers.

“They’re there through no fault of their own,” Cunningham said in an earlier interview, “and what Janet and Shamrock Federal are doing is especially meaningful because these children have had everything taken away from them.”

Cunningham and CASA 69’s assistant director, Evinn Wyatt, and Bethany Scroggins, a volunteer loaded up the packages for delivery. Some have already been mailed to children in other states. Volunteers will deliver some of them to children who live in Moore and nearby counties. Caring members of the community, though, have blessed all of them, Cunningham said.

“I want to thank the angels in Moore County who dropped everything to make one child’s Christmas the best Christmas ever,” she said.