When Dumas received more than 25 inches of rain this year, it exposed a problem the Dumas City Commission has ignored for years: city expenditures have far exceeded revenues. Their boasts of having a low tax rate, and their historical refusal to raise the base rate for utilities created the perfect financial storm during a summer when water consumption was nearly half what it was in 2011, and revenue from selling water to city residents dried up as more rain fell.

In July, after the Commission wrapped up its budget workshops, the bubble burst. The city manager told them they didn’t have the money to make a $1.9 million debt service payment due in September. The commissioners were incredulous. How could that be?, which was followed by their demands to know who was to blame. They grilled Finance Director Dottie Crockett, but the answers were laying in front of them in the financial reports they obviously don’t read. Crockett made the mistake of writing “ … the City’s current financial position is stable” in the monthly financials she gives the commissioners, but if they had thoroughly read the financials, it was clear the stability was rocky.

In 2011/2012, the city’s expenditures were $479,237 more than revenues. In 2012/2013 it was worse. Expenditures exceeded revenues by $929,004, and in 2013/2014 expenditures overtook revenues by $608,666. Clearly there was a problem, but the Commission did nothing. Instead Mayor Pro Tem Dr. David Bonner continued to champion for the construction of a convention center to be built in Dumas, insisting the city could pay for it. Each time, Commissioner Steve Bodnar stuck a pin in Bonner’s bubble and asked, “How?”

The Commission has stubbornly stuck to its mad plan that somehow revenue would materialize in spite of a tax rate and utility base rate that has proven unable to generate the money needed to operate the city’s budget. For the past several years, the city has had bond money in its accounts, but it was earmarked for large infrastructure renovation projects that were ignored for years. The projects are completed, and now the city must make those million dollar payments. How? It’s clear now it can’t be done with the fantastic belief that money from water and gas consumption will pour in. In a wet summer such as this one, the revenue hasn’t been there. Did the commissioners ask any questions about how the wet summer was affecting the budget? They did not. 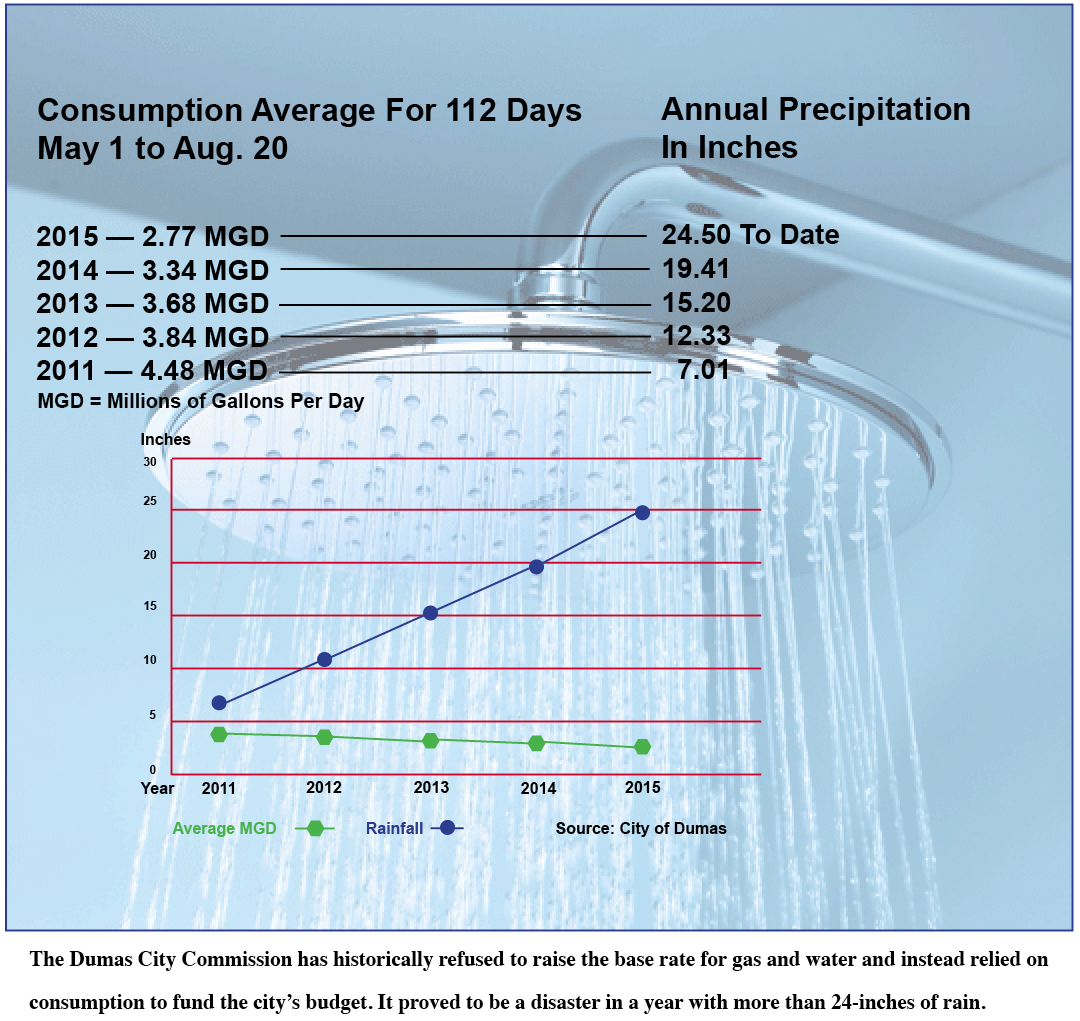 Bodnar has been sounding the alarm for a long time, but he’s ignored and dismissed as negative. Commissioners Justin Willis and Ben Maples, elected in May, haven’t served long enough to be saddled with any of the blame. The problems have been brewing long before they took office. Former commissioners and mayors contributed to the problem, but they’re out of office. So that leaves Bonner and Mayor Pat Sims.

The city won’t know how revenues will compare to expenditures for 2014/2015 until the audit is completed later this year, but Taylor estimates revenues to exceed expenditures by $272,021. In the months since he has been the interim city manager and then voted in by the Commission as city manager, he has slashed and whittled away at expenses to make that happen. He understands that the low tax rate and the Commission’s reliance on utility consumption plunged the city into financial distress.

When Taylor and Crockett worked on the 2015/2016 budget, they cut $2,784,014 from the 18 city departments’ budget requests. They knew it was going to be a lean year, and finally the Commission got a clue and raised property taxes and the gas and water base rate, which should have been done years ago.

So where does the buck stop? When Bonner asked Crockett “How did this happen?” he made it clear the Commission wasn’t in charge, and they’re supposed to be. If the commissioners want the finance director to spoon-feed them every financial detail, then they need to tell her so. Should Crockett have stood up, waved her arms and yelled, “Warning!” They wouldn’t have listened to her, just as some commissioners haven’t listed to Bodnar’s warnings of an imminent financial crisis. The commissioners, and former mayors, haven’t listened to any advice in the past years about the need to raise taxes and the base utility rate, and former city manager Vince DiPiazza, certain some of the commissioners were out to get him, didn’t care.

The commissioners are looking for someone to blame after it was revealed they would have to get a $1.5 million loan to make their September payment. They need only to look in the mirror. They’re in charge, and they should be reading the financials given to them. They’ve seen the audits for the past budgets, which show they were in the negative. Faced with those red numbers, why didn’t they do something to get the city on solid financial ground? Why did they wait until it blew up in their faces? They’re like the captain who ignored his ship was taking on water but then demanded someone be court-martialed when it sank.

It’s clear the environment at City Hall has been one of lack of communication and operating in La La Land. No one has been steering the ship, and isn’t that what we elected the commissioners to do? They have decisions to make. They must decide whether or not they are in charge, and if they are, they must assume the responsibility for the shape the city’s budget is in.

If they’re not in charge, then would they please tell us who is. 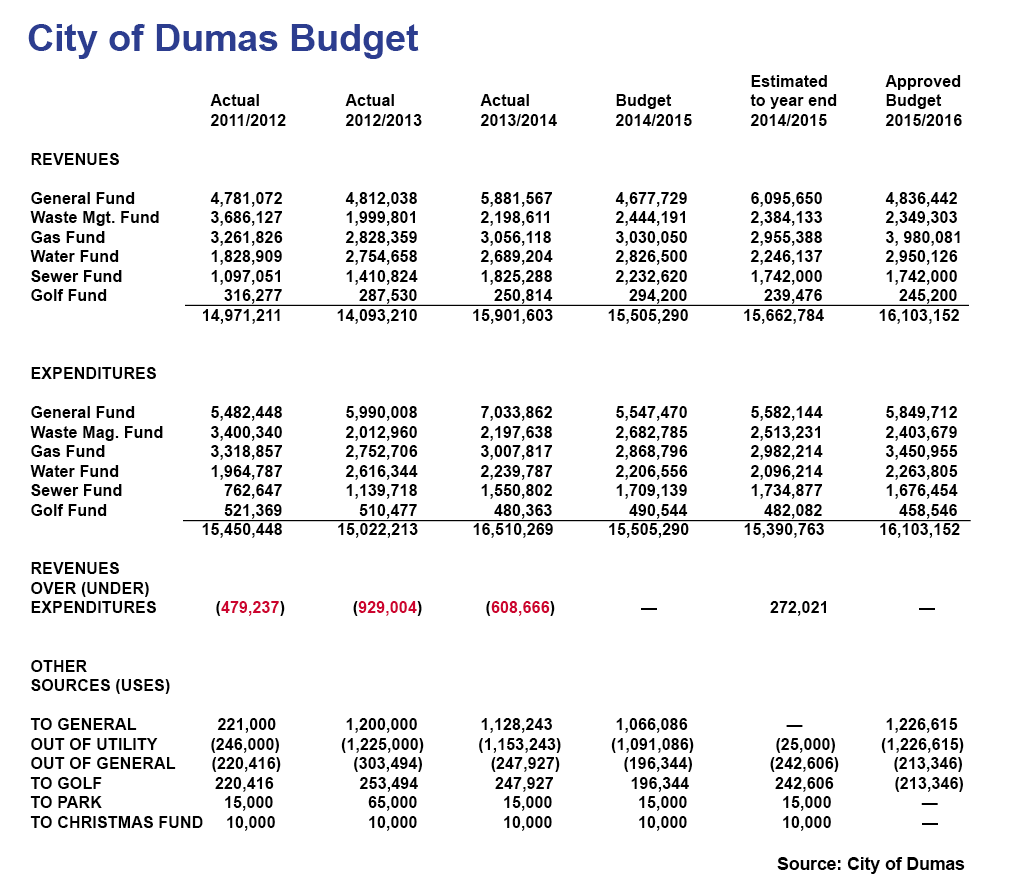