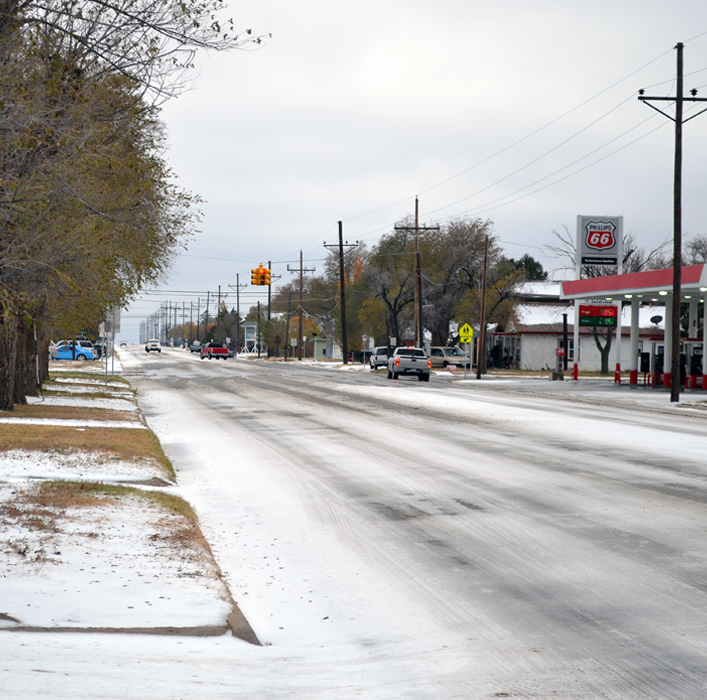 Above: The traffic on Maddox Avenue was minimal Saturday after Winter Storm Cara, coated the roads with about an inch of ice. Fortunately, the sheriff’s department didn’t report any major accidents.

Her name was Cara. She obviously had a temper because she blasted into the Panhandle from the Northwest and created dangerous driving conditions by covering highways with more than an inch of ice.

KVII-TV meteorologist Nicole Hartford said winter storms are now given names, and Cara, the first of the season, was a system credited with causing about 100 crashes in the Panhandle, according to USA Today. Cara’s reach was wide, flooding North Texas where eight people died and hammering Kansas and Oklahoma where another six people died in crashes related to the ice storm.

“It’s going to be much clearer today,” Hartford said. “The low pressure is shifting to the east, taking the rain and snow with it.”

Temperatures this week will return to seasonal numbers with highs in the 40s and 50s, but the lows will drop to below freezing, Hartford said. Moore County Road and Bridge supervisor Wes McDougal said the county doesn’t have the equipment to lay down sand and salt, and most of the people who use the county roads use tractors and four-wheel drives to get around.

The sheriff’s department didn’t report any major accidents, but Sheriff Bo DeArmond said deputies responded to about a dozen minor wrecks Friday and Saturday. Amarillo, however, fared worse. On Saturday, a tractor-trailer crashed into Outback Steakhouse on Interstate 40, KVII-TV reported.

Holiday visitors who had to extend their stays because of the storm welcome today’s warmer temperatures that will begin to thaw the ice. Joe Potter of Wichita, Kansas, is one of them.

“I was supposed to leave Saturday, but I couldn’t because the roads were so bad,” Potter said. “I didn’t really mind because I got to spend more time with family, but this storm is going to hit my paycheck.”