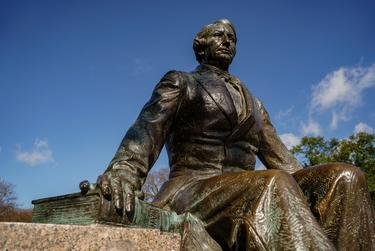 But the commission — tasked with examining these issues in the wake of the racial reckoning that swept the country after the death of George Floyd — gave a pass to the school’s founder Judge R.E.B. Baylor who also owned slaves. Some students this summer called for a statue of the founder to be removed from campus and for the university itself to be renamed.

“Judge Baylor was not a perfect man,” Mark Rountree, chair of the Baylor Board of Regents, wrote in a letter to the university community Tuesday. “With our university, Judge Baylor established the foundation for hundreds of thousands of students — which now include all races and creeds — to receive a unique educational experience that combines academic excellence and a Christian commitment. We will continue to recognize Judge Baylor for the founding of Baylor University, just as we commit to presenting a more complete history of the university.”

The report’s authors said, however, they were concerned by the phrase on Baylor’s statue, that “he exemplified in his life the motto of Baylor University Pro Ecclesia/Pro Texana” would imply acceptance of his past as a slaveholder. The committee suggested that statement be removed or further explained.

The board of regents commissioned the report last June when it passed a unanimous resolution acknowledging Baylor’s connection to slavery and the Confederacy as universities across the country were forced to consider the legacy of racism on campus. Students on campus and across Texas demanded university leaders address Confederate symbols and make changes to improve diversity and inclusion.

At Baylor, where Black students make up just 6% of the student body, university leaders in July launched a new scholarship program aimed at recruiting more diverse students. They also created a new diversity training video, though it was largely panned by students and the Baylor Lariat student newspaper’s editorial board as “missing the mark.”

The board of regents accepted the commission report at its meeting last month and charged university leaders with developing an action plan.

The commission recommended the university make other changes to two other statues on campus representing William Milton Tryon and James Huckins, who also helped start the university. The report noted the text on those monuments don’t disclose that the men owned slaves or that Huckins served as a chaplain with the rank of captain in the Confederate army. The commission suggests moving the statues of the two men closer together to make room for an additional monument dedicated to the “unknown enslaved” people who were owned by these founders and helped build the university.

“Given that these monuments were placed on Baylor’s campus in the 1930s and 1940s to celebrate Texas history and Baylor’s origins, it should be noted that they are not Confederate monuments,” the report states. “Collectively speaking, however, the monuments commemorate a white Baylor, the white slave-owning leaders of Baylor University’s early years and those leaders’ contributions in the context of a culture of white superiority.”

One of the most substantial recommended changes made by the commission is to rename Burleson Quadrangle to Baylor Family Quadrangle and relocate a statue of former Baylor University President Rufus Burleson to a “less prominent location.” Burleson not only owned slaves and served in the Confederate Army as a chaplain, but promoted an idea known as the “Lost Cause” theory that said slavery was justified and moral, and honored antebellum whiteness.

The report argues the quad, the traditional center of campus, should be renamed to create a more inclusive campus where new traditions and additional plaques can be established, including placards celebrating the first Baylor graduates from different racial groups, prominent women and Black athletes and alumni, among others.

The university also announced Tuesday it will erect new statues of Rev. Robert Gilbert and Barbara Walker, two of Baylor’s first Black graduates who helped to integrate the school.

“Because the Mace is composed of objects with connections to slavery, its use as a symbol of the university can be seen as incongruent with such a statement,” the report states.

The group suggests the university commission a new mace that can be used at future Baylor graduation ceremonies. They also said the university should consider renaming Carroll Library, which was named after another slaveholder.

In addition to changing placards on statues, the commission also suggests adding “quick response” codes to all historic representations on campus so people can scan the codes on their smartphones and learn a more balanced story about the people celebrated throughout campus.