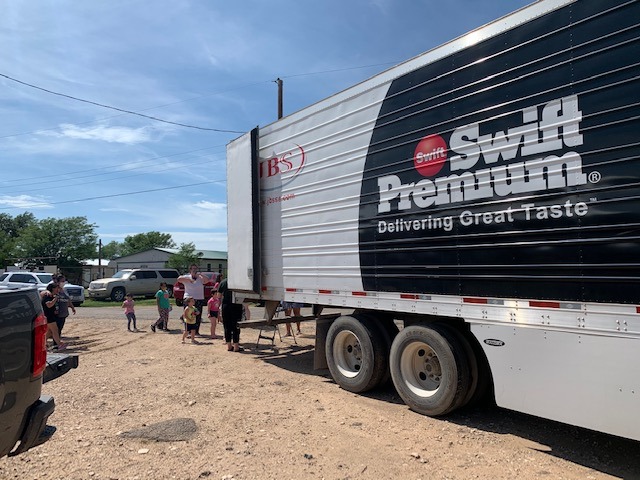 Snack Pak 4 Kids of Dumas (SP4K) worked with multiple organizations on Thursday to distribute over 12,000 pounds of food to more than 420 families in the Moore County Area. The Dumas SP4K group said Thursday they were “…honored and privileged to serve with people that are making a difference to fill a need in our community.”

JBS Carriers transported the food worth more than $10,000 and volunteers distributed it to more than 1,400 people. The food was courtesy of Farmers for Families and distributed through Snack Pak 4 Kids, an Amarillo based non-profit organization.

Snack Pak 4 Kids started in 2010 when Dyron and Kelly Howell discovered Amarillo was the largest city west of Dallas without a weekend backpack program. More than 3,200 children in the Amarillo Independent School District relied only on the meals served to them at school for their weekly food. That meant hundreds of children spent their nights and weekends hungry.

The Howells assembled 10 bags of food that could be prepared without adult supervision. On Friday, September 3, 2010, the first 10 SP4K recipients received a bag containing enough food to get them through the weekend. The organization has since grown to serve more than 10,000 kids in 51 school districts, including Dumas.