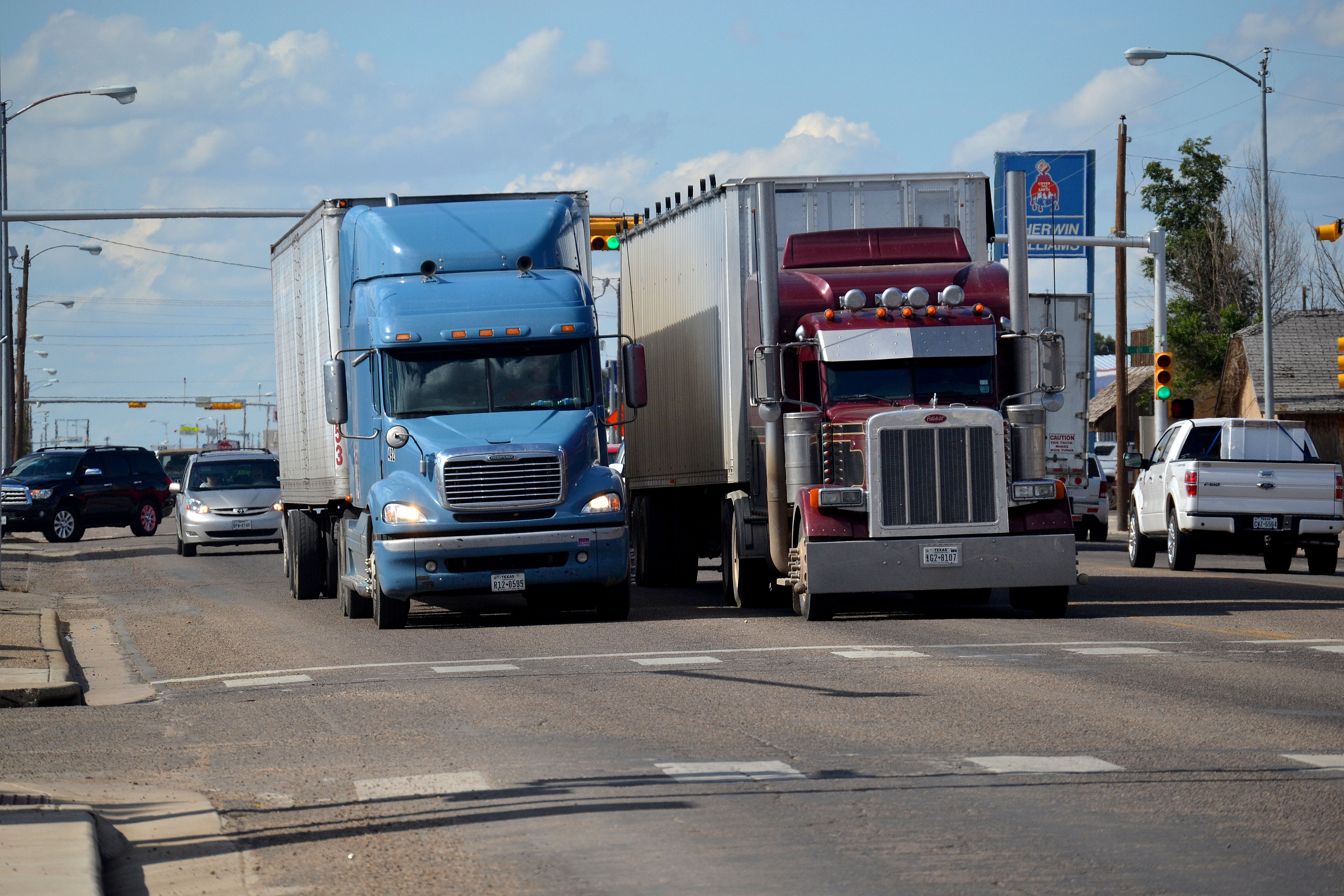 Above: Traffic congestion on Dumas Avenue has sparked talk about a relief route around the city. City and county officials are divided on the issue.

A Texas Department of Transportation official said repeatedly during a joint special meeting of the Dumas City Commission and the Moore County Commissioners Court on Tuesday that the future of a relief route around Dumas is in the hands of the community.

“It’s the community’s decision,” said Gus Khankarli, TxDOT Director of Transportation, Planning and Development. “I don’t want to get into a situation of having the appearance we’re imposing anything (on the community).”

Moore County Commissioners Daniel Garcia, Len Sheets, Milton Pax and Lynn Cartrite attended the meeting, along with Dumas City Commissioners Justin Willis and Steve Bodnar and Dumas Mayor Pat Sims. Several Dumas business owners and other city and county officials also attended what turned out to be a session where Khankarli explained the legalities of using the $5.4 million that has been earmarked for the relief route and the collaborative relationship he says he wants to establish with the city and county.

“We don’t want to get ahead of the public involvement process,” Khankarli said. “We’d like to start a simple conversation that tells us what does the community want.”

But it was clear at the meeting that the city and county don’t know what they want, nor have they been clear on the legalities and consequences of moving forward with plans for the relief route or not doing anything. Some officials weren’t certain about the availability of the earmarked funds if Dumas does nothing in the immediate future or if TxDOT would build a highway that would completely bypass Moore County if local officials say they don’t want the route.

Khankarli said federal law prevents the funds from being used for any other purpose other than their earmarked intent.

“They can’t be used somewhere else,” he said. “As long as we don’t activate the project, they can sit there. But one thing the community has to know is that the purchasing power of the $5.4 million has been almost halved. This is 10 years old. That’s why I have said that if the community chooses to pursue the relief route, TxDOT will have to look for more funds.”

Some of the comments and questions voiced at the meeting reflected community concerns: that a relief route would have severe economic consequences for business owners and Dumas would suffer an irreversible decline. In an email sent to each of the city commissioners, Dumas Economic Development Corporation Executive Director Michael Running wrote, “Gus does not have a handle on the Dumas economy.”

“We are an anomaly in that the largest percentage of tax dollars are gained from our businesses along Dumas Avenue,” Running wrote. “Only one study out of nearly 10 that I have looked at took local option sales tax dollars into consideration.”

Still, Khankarli maintains TxDOT will do only what Dumas wants, another statement Running countered in his letter.

“It is constantly mentioned how much TxDOT WANTS (Running’s emphasis) to work with us,” he wrote. “I do not doubt that. However, what they want and what falls within their limitations are two completely different things. Their mission is not in line with the mission of an economically aggressive community. Progress for the transportation industry is not progress for a community reliant on the dollars from that road. There never has been, nor will there ever be a community that has added an industry or grown an industry off of a bypass road.”

Running is opposed to starting the clock on the project, which will put it on the government’s radar, forcing officials to answer questions if planning and construction progress lags. Cartrite, however, said he is concerned that the costs of building the relief route would increase significantly the longer the wait.

Bodnar asked Khankarli about access to the motels on Dumas’ southern edge.

“If we put that in the plans, how does that work?”

Khankarli said again TxDOT would work with the community.

Khankarli said city and county officials are welcome to propose where the relief route would be located, that if the community has a preferred alignment it “would help us accelerate the process.”

“In essence, our role is nothing more than facilitate and help the community,” he said.

If officials decide to move forward with the project, Khankarli said the environmental and economic studies would take up to two years, and another two-and-a-half years to complete the design and construction.

Pax said he’s concerned people will bypass Dumas and its busy main thoroughfare in favor of a less-congested route if nothing is done to alleviate traffic through the city.

“I’m not pushing this (relief route) one way or another, but our congestion continues to get heavier,” Pax said. “If people find other ways to get where they’re going, are you going to be able to get them back?”

To get TxDOT working on the project, the city or county, or both, would have to pass a resolution, authorizing them to go forward. At the meeting, no such decision was made. Running said, however, he would not promote the relief route if the decision was made to pursue it, igniting a short but heated exchange with Bodnar.

“Then we’ll be looking for another economic development director,” Bodnar said.

On Thursday, eight people from Dumas will travel to Austin to meet with officials on a fact-finding mission for Moore County’s highway future.

“We want to get information about the future of highway development in this area,” Sims said. “What we’re doing now is going to affect generations to come.”

Bodnar said he wasn’t informed that city officials had planned to go to Austin.