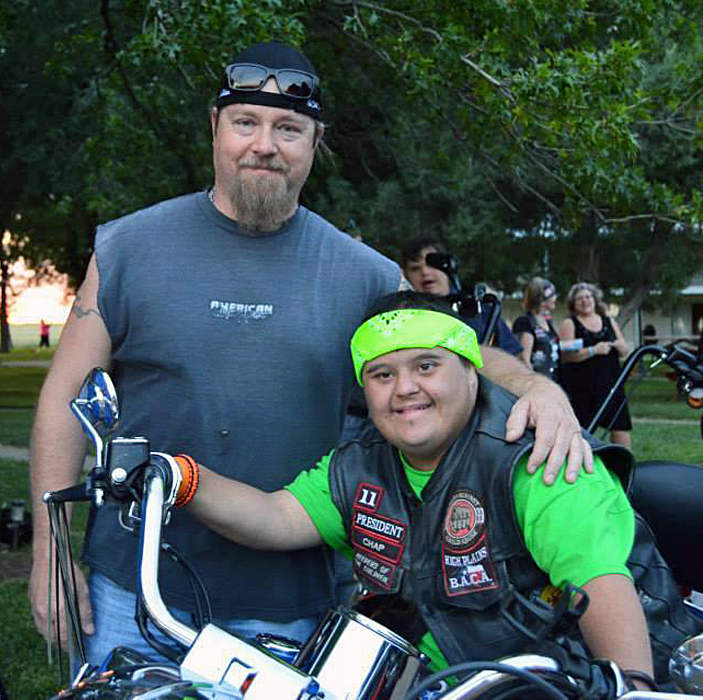 Above: Panhandle Children’s Foundation Inc. helps disadvantaged children and those with special needs throughout the year, including summer Agape Camps at Talon Point where they get to take part in activities normally not available to them. Their annual fundraiser, Hogs at the Point, helps raise the money the organization uses. (Courtesy Photo)

The possibility that their financial resources might not be enough to meet their children’s needs is an image that haunts many mothers and fathers. Even more troubling, imagine the worry that can exhaust the parents of special needs children. It’s one thing not to be able to buy school supplies or Christmas presents. It’s another when money doesn’t stretch far enough to provide for a child whose needs are exacerbated by a disability

Dumas Police Sgt. Nick Jordan often sees those needs. As treasurer of Panhandle Children’s Foundation Inc., he and the organization’s other 12 volunteer board members work to assist the families of those children by providing financial assistance or even a much-needed outing. During the 12 years since its founding in 2003, the foundation has doled out about $1 million to families and children who might have gone without help, according to its website, www.panhandlechildrensfoundation.org.

Although the foundation’s funds are limited, it assists children up to 18 years old with $1,000 per calendar year. Jordan says when families apply for help, the board members often contact other organizations to see if they’re able to provide partial funding in order to stretch PCFI’s dollars. Donations and fundraisers are the organization’s sole generators for funds.

“Hogs at the Point is our annual fundraiser,” Jordan said. “It’s a weekend event at Talon Point where we have a bike run, silent and live auctions, and we sell tickets for a chance to win a motorcycle.”

On Aug. 20, 2016, when the next Hogs at the Point is held, people can buy tickets for a chance to win a 2015 Harley Davidson Street Glide Special. The event-filled weekend includes a barbecue cook-off, games for kids and a live band and dance. It was at a previous Hogs at the Point that got Jordan involved in PCFI.

“I attended Hogs, and I liked what they were doing,” he said. “I went to a couple of camps and wanted to get involved.”

The camps Jordan refers to are the Agape Camps, designed for young people with special needs and their families. They’re held at Talon Point, and the next one is scheduled for June 13-17, 2016. The free camp offers the children and teens experiences such as horseback riding, crafts and paddle boating.

“Those experiences are usually out of the children’s reach because of disabilities or financial reasons,” Jordan said. “In 2014, we had 282 children and teens at Camp Agape, but it’s not just for the kids. It’s a time for their parents to enjoy some down time, too. Their lives aren’t always easy.”

A Hartley family can attest to those difficulties. Jordan said PCFI recently helped the family who has five daughters, four of whom are disabled.

“One of the girls’ therapists contacted us, and we found out that they couldn’t get the wheelchairs through the bathroom door,” Jordan said. “The parents would have to carry the girls, and you can imagine how exhausting that was. So we had a contractor widen the door and make it wheelchair accessible.”

Widening a door could be an easily accomplished project for many people, but it’s a financially daunting job for the families PCFI helps, and as the calendar ticks off the few weeks before Christmas, the organization gears up to help more families whose holidays would be less bright without assistance.

“All the board members have access to the Christmas funds,” Jordan said, “but we don’t just give during the holidays. We give to local clubs like Young Guns Wrestling. They have kids whose parents can’t afford for them to be part of the club. We basically exist to make kids’ lives better, to let them know they’re cared about and to help give them the life everyone should have. I feel good about that.”

Anyone who wants to donate to PCFI can call 806-935-5598 or email them at pcfi@panhandlechildrensfoundation.org. Because the organization is a nonprofit, they’re restricted to two fundraisers per year, but other groups can host an event and donate the proceeds to PCFI. Parents who need assistance also can reach the organization through the same contacts.