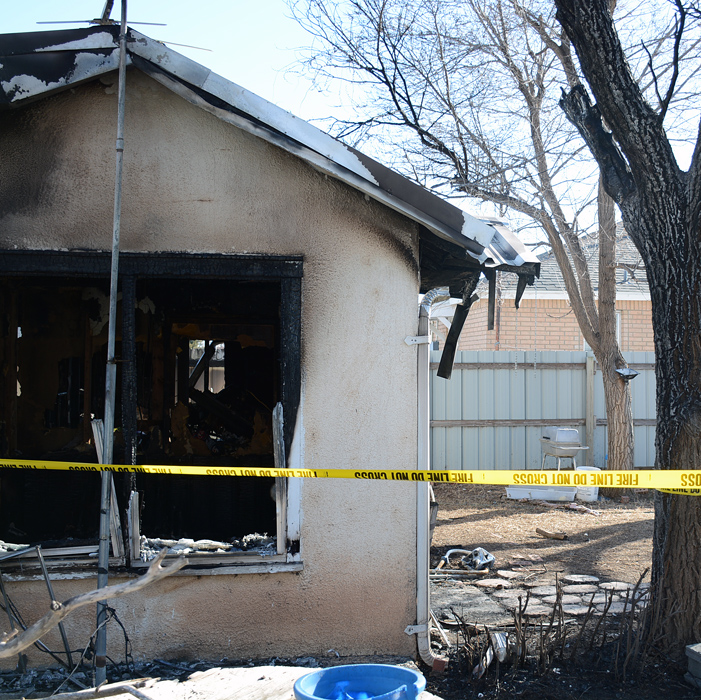 Above: Dorothy Ramos lives next door to the house on South Klein that burned Monday. She says the Dumas Police Department and the Dumas Fire Department saved her property and her life.

A woman who lives next door to a house that was destroyed by fire Monday says that if it hadn’t been for the Dumas Fire Department and the Dumas Police Department, her home would have been lost, too, and probably her life.

“One of my neighbors was beating on my door at about 2:30 in the morning or so, and he said the house was on fire,” Dorothy Ramos said. “I told him my house wasn’t on fire, and then I saw flames coming out of the roof of the house next door. They were about 8 feet in the air.”

Ramos said firefighters and police officers arrived at the same time, and an officer told her she had one minute to leave her house. By that time, she could see flames nearing the eaves of her house.

“I grabbed what little I could and drove to the park across the street and watched them fight the fire,” Ramos said.

The house at 1027 S. Klein is about 8 feet from Ramos’ house, and she credits the firefighters and police officers for saving her life and her house.

“I want people to know we have a great fire department and a wonderful police department,” Ramos said. “If they hadn’t worked so hard, I would have lost my house. The fire was dangerously close, and at that time of morning, if my house had caught on fire, I might not have known it until it was too late. I’m so thankful for all their hard work and being on the ball. They stayed on it well into the next day, staying at the scene for about 15 hours.”

“We thank her from the bottom of our hearts,” Jenkins said. “If the fire had burned much longer, it would have gone to her house. There are times when we have to make the decision to abandon the house that’s on fire to save neighboring structures. On this one, the firefighters we able to battle the blaze while protecting the other houses. It’s the result of the hours upon hours of training the firefighters go through.”

“In a situation such as this, the protection of personal property is important,” Nelson said. “However, the protection of human life is paramount. It’s hard to believe, but material things can be replaced, but once a human life is gone, it’s gone forever. How do you unring a bell? This is the concept that officers are taught in the academy and forever embedded in their very being.”

Ramos had one more thing to say about the firefighters’ and officers’ training.