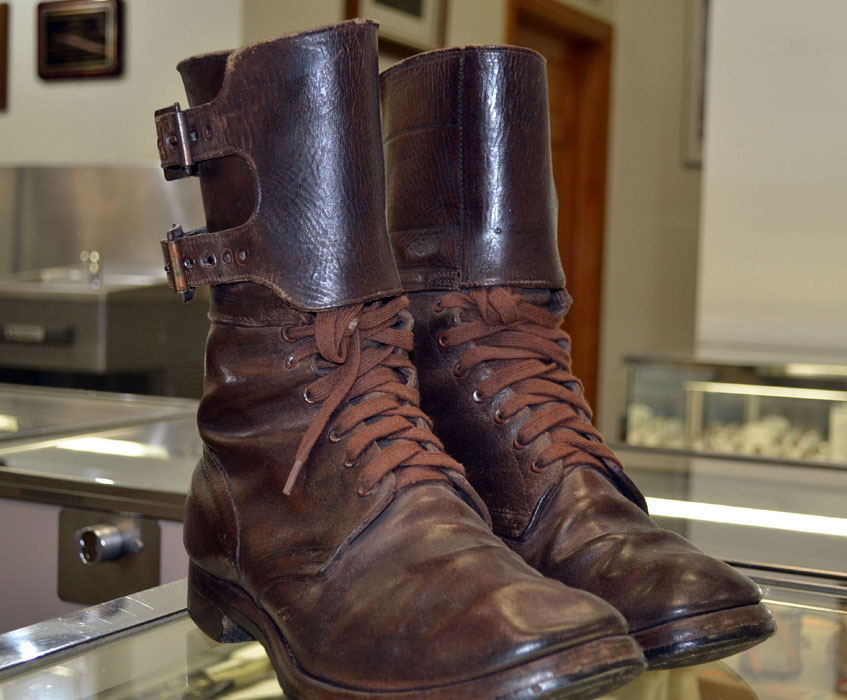 Above: The pair of military boots that rest on top of a glass display case in the Window on the Plains Museum are more than just a pair of boots. A hero wore them. Every exhibit in the museum has a story.

Years ago, Dumas High School senior boys would turn their class rings around to where the stone was on the palm side of their hands. It was done for one purpose: The seniors would “dob” the sophomore boys with it, meaning they would pop the sophomores on the head with their rings. It was a tradition, one that was later swept to the curb by authorities who deemed it cruel.

Inside a glass display case at the Window on the Plains Museum in Dumas, there is a collection of some of those DHS class rings, and a person whose mind is given to wandering might wonder how many of those rings made contact with a sophomore’s head. Every ring in that collection has a story. In fact, every exhibit in the museum has a story, and for the person fortunate enough to have an imagination, whose curiosity allows him to visualize, the museum comes alive with thousands of stories. 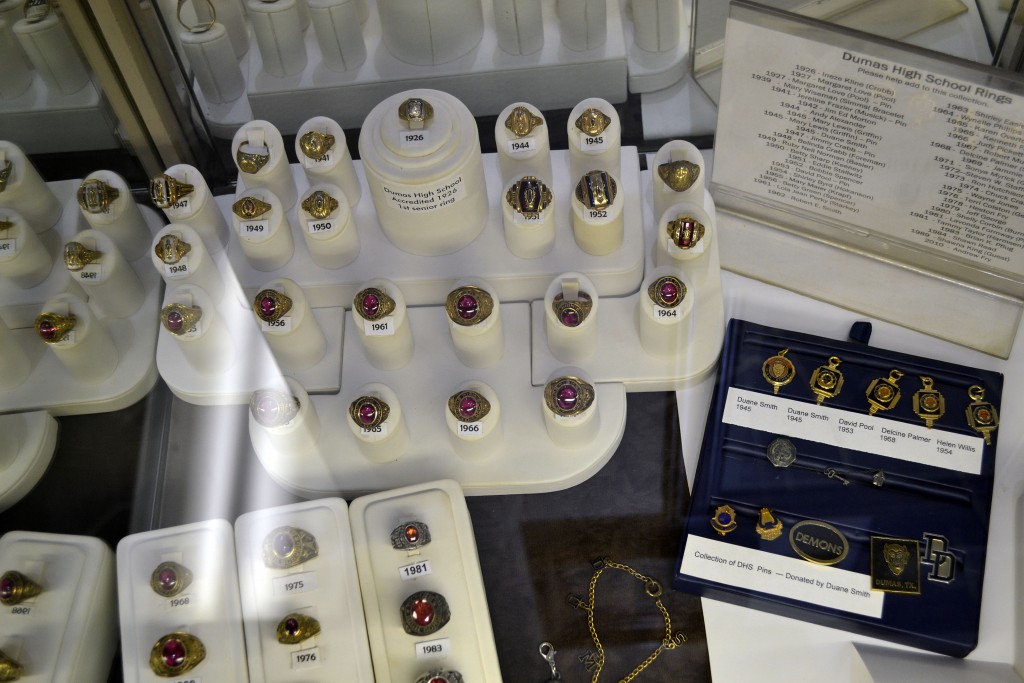 A museum isn’t a storehouse for “things.” To call them things would be to strip them of their stories, to demagnetize them of the energy they will forever hold from their owners.

“I love everything in here,” said Museum Director Terri George. “History isn’t boring. The problem is that some people can’t see the human connection to the museum exhibits. You have to imagine all of these exhibits in the context of the roles they played in people’s lives. When you do that, you’ll never want to leave the museum.”

Consider the pair of military boots that now rest on top of one of the glass display cases in the museum. Who wore them? Picture a soldier, long gone, buffing them to a high sheen as he prepares for a night on the town in Paris after months of sleeping on the cold ground and bathing out of his helmet. Picture them decades later in a closet in a Panhandle farming town, a reminder of a generation of men and women who fought to rid the world of evil. They’re not just boots. A hero wore those boots.

“I’m proud of the role we play in preserving that history,” George said. “We’re going to lose our history if we’re not taught it, and the museum’s role is crucial in that teaching. This is the place where history can come alive. It’s one thing to be told about our pioneers, but it’s something else again to see the things they owned while building our community.”

The saddles owned by pioneer cowboys, such as Lew Haile, straddle a fence near the museum’s entrance. The leather on the saddles’ seats is polished from wear, from the thousands of hours the working cowboys sat in them. Imagine Lew Haile twisting around in his saddle, one hand holding the reins, the other on the saddle horn, as he surveyed his property. Now it’s more than a saddle in a museum; to touch that saddle is to touch Mr. Haile. 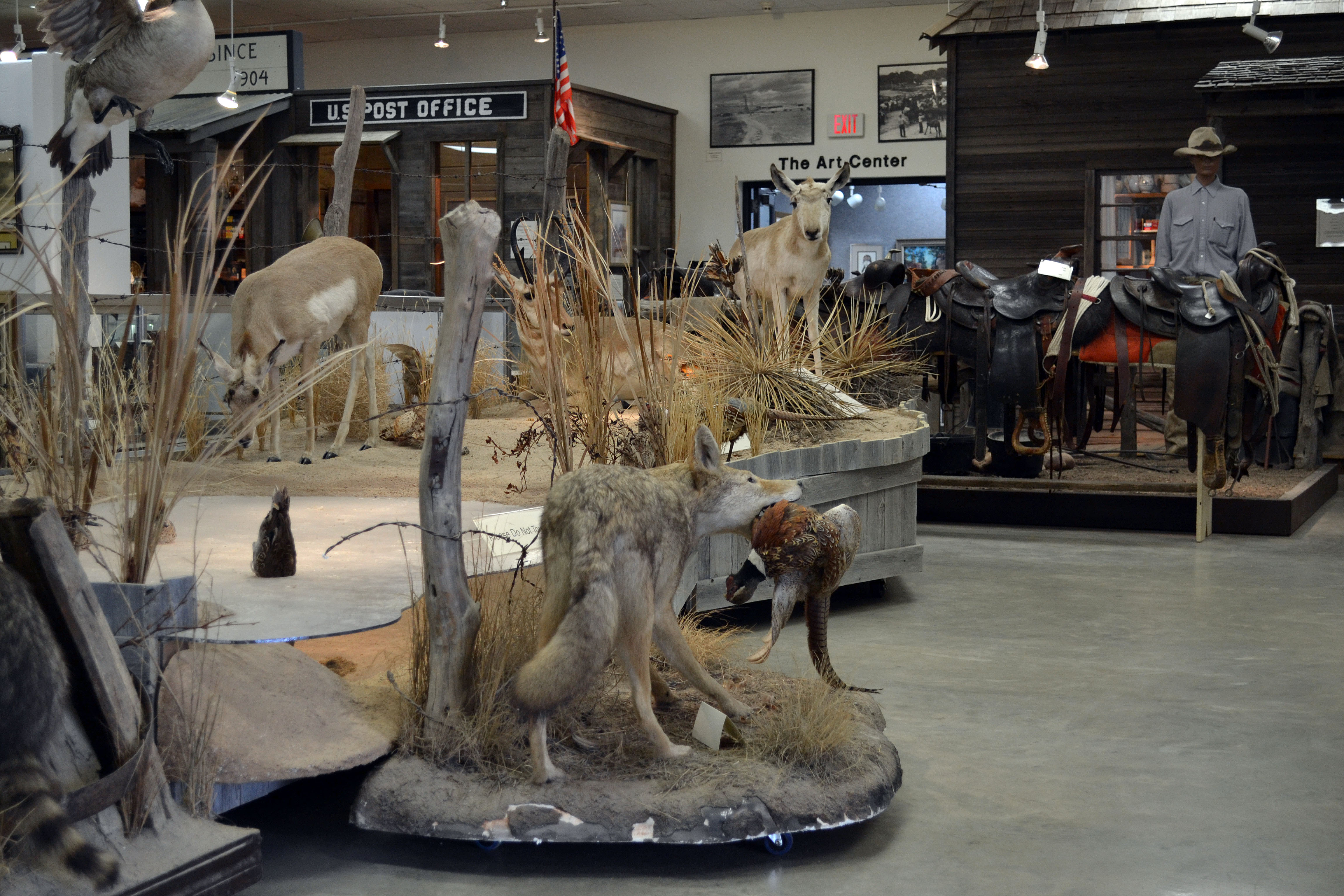 “The museum is an incredible place to work,” George said. “I get to work beside the people who built our community because I play a part in preserving and exhibiting the things they owned, the things they treasured. For example, Carolyn Stallwitz will forever live here because we have the contents of her studio on exhibit.”

Stallwitz was a notable Dumas artist who painted for decades. Her wildlife art was especially prized, and visitors can see the recreation of her studio at the museum. The brushes and other materials in the exhibit are the same ones that swept across the canvasses that now hang in many homes and galleries. They are more than brushes. They are Carolyn Stallwitz’s brushes.

“If someone can come into the museum and think of the exhibits in the context of the role they played in people’s lives, they’d come back every day for months,” George said. “You just need to take your time, and let your mind think of the stories.”

Thousands of people visit the museum each year. Glynda Pflug, the museum’s secretary and treasurer, recently told the Dumas City Commission they had visitors from 42 states and 12 countries during their last fiscal year. And the museum is growing. When the Family Life Center opens later this year, the museum will add 23 new exhibits.

George says that with that growth, there is more need for volunteers. As the older volunteers pass away, there haven’t been many younger people who have stepped up to the role.

“We don’t have a big budget, so we rely a lot on people volunteering their time,” George said. “ I’m way down on volunteers right now.”

The museum is sustained with a yearly allocation from the city’s hotel/motel tax. Their budget for fiscal 2016 is $129,404, and fundraisers and donations boost it.

“I think we do an incredible job with what we’re given,” George said. “We have a love for the museum, so we’re committed to it. This is our history, and it’s an incredible treasure. It’s priceless.”

Just as Lew Haile once did, the Window on the Plains Museum is riding tall in the saddle.