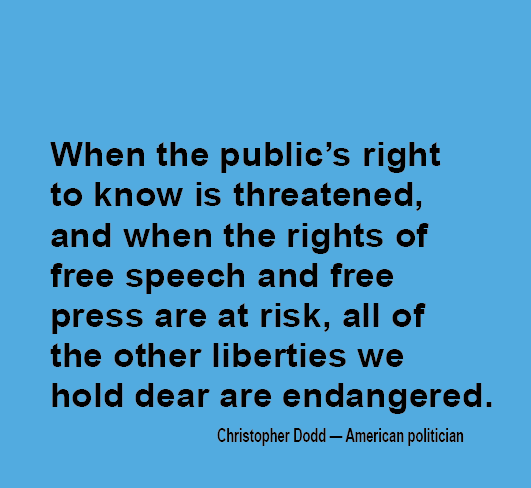 Several years ago, I was one of those people who said I don’t want to read the news or books on any electronic device. Today, it’s pretty much the only way I want to read the news, and while I still buy books because I like having them, I read the majority of the titles on my phone or iPad. When I realized I could carry around as many titles as I like or read the news from dozens of news organizations on a small device, I was hooked. I absolutely love it.

I’m not saying print is dead, but it’s clear print should check itself into hospice care. Put it on oxygen and alert the family because it’s not long for this world. The smart newspaper owners and boards of directors are transitioning to online, but the majority of newspapers, especially the smaller ones, have refused to realize the power of online reporting, and they’ll soon be gasping for their last breath. And that’s a shame because they could have remained strong. They could be publishing their print editions while educating and preparing their readers for the inevitable move to online editions.

There’s a reason you don’t see horses and buggies on the streets. We evolve, and those who fight it are forgotten. Who has a rotary phone in his or her home? Who stops to make a call at a pay telephone? Can you think of one person who still makes dresses out of flour sacks? We evolve and progress, and those who fight it might think their stubbornness is endearing; they might think their refusal to learn how to use a computer is cute, but it’s just plain dumb. It’s like living in a bubble and secluding yourself from an amazing world. Live in the bubble, and you’ll never know the fragrance of a gardenia or the feel of summer rain on your face. Refuse to use smartphones, tablets and computers, and your mind will never be exposed to the wealth of information available at your fingertips.

To be sure, there is a lot of garbage online, but it’s the same with anything else. When I want to go on an outing, I don’t go to the landfill. Instead, I’ll go to Palo Duro Canyon or take a short drive to Red River or Santa Fe, but I don’t ignore those beautiful places simply because there also are ugly ones nearby. I don’t throw the baby out with the bathwater.

So welcome to the Moore County Journal, the newest addition to your choices for news. The site has been up only a couple of days, and I still have quite a few features to add, and I need to tweak others, but I think you’ll see that it has the makings of being the premier source of news in Moore County. In another week, you’ll see additions to the site that will educate and entertain you. There is more to reporting than regurgitating what the city and county commissioners did. Who wants to read the meeting’s minutes? A good reporter and a good news organization will break down what the commissioners did and explain to you why you should care. Currently, a relief route is looking at Dumas square in the eye, but there has been no reporting to give you the facts. County and city officials are squaring off on the issue, but no one has given the public any investigate reporting except to report there was a meeting. How can people make informed decisions when they’re never given any information?

One taxing entity, the Moore County Hospital District, is never covered by any news organization in the county, and that’s dangerous. Without responsible, unbiased coverage, government bodies will slip into a pattern of not working transparently. It is the job of a newspaper, online or print, to be the community’s watchdog, to hold elected and appointed officials accountable and to report what they’re doing to the public.

And that’s what I will do with the Moore County Journal. You’ll have plenty of fun stories to read, but you can bank on it that I will investigate and give you as much information as possible on the issues that affect you and the community. Advertisers won’t dictate editorial content. Friendships with community leaders won’t affect editorial content. You will get all the news, stripped of bias and agendas. That’s how it should be.

The Moore County Journal will embrace small-town journalism, spotlighting the fundraisers and the birthdays and anniversaries. We’ll be the modern version of the old switchboard operators who knew and reported everything that was going on in town, but we absolutely won’t shy away from the hard stories or refrain from asking the hard questions. Even if the temperature in the room drops when I enter a public board meeting (that has happened), and those people hate every word I write about their meeting, I’m going to give you the facts. Because that’s real journalism, and that’s what has kept our country free and strong. Idealistic? Yes. Not popular? Sometimes. But I’m mighty stubborn, and I’ve quit newspapers that didn’t believe that was their job. Just as an employer has the right to fire a bad employee, an employee has the right to fire a bad employer.

So keep checking back during the next week as I fine-tune this site. In a month, you’ll wonder how you ever lived without it. And I have a tough hide, so send your comments, good and bad, to moorecountyjournal@gmail.com.

I look forward to giving you an outstanding news product.