Home LIFE + STYLE You can get there from here: DHS grad composes scores for ‘War... 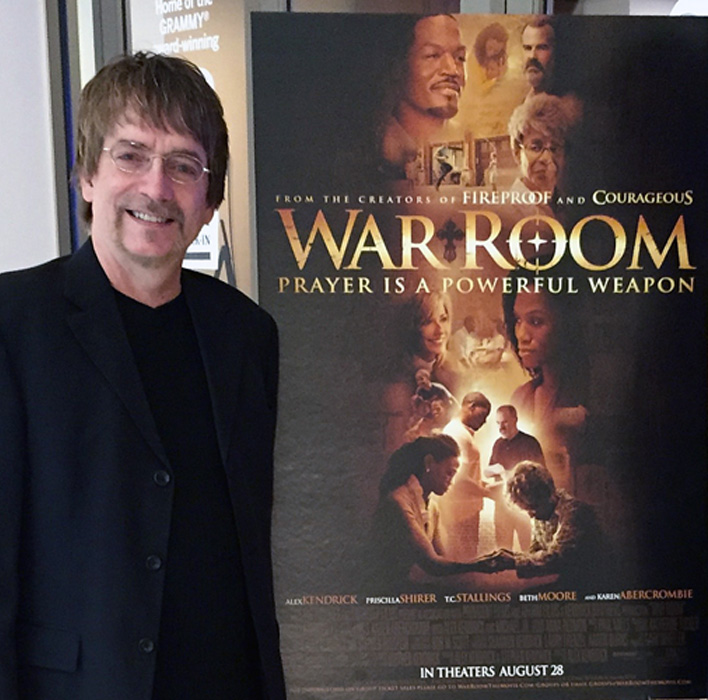 Above: Paul Mills attends the premiere of “War Room” at the Woodruff Arts Center in Atlanta. Mills, a 1974 Dumas High School graduate, composed the score for the movie.

Imagine watching “Star Wars” or “Rocky” without their adrenaline-pumping music. Or worse — imagine “Jaws” without those famous eighth notes that begin in thumping pairs and then build up to that ominous dum-dum-dum-dum as the shark nears its prey. The music in those movies played a role as important as the leading characters. In fact, the music from “Jaws” can’t be separated from the shark. Where there was one there was the other, and it became the movie’s most memorable feature, proving the right music can catapult a two-hour feature into Hollywood’s stratosphere.

If it’s difficult for a director to pull all the elements of a movie together, consider the daunting task a composer faces when constructing a score that will convey the emotion of each scene. The music often works in the background; it’s the current on which the movie rides, now and then crescendoing into rapids that grab the audience by the collar and then retreats to the background. The perfect score is like sunlight. We feel it, but we rarely think about it.

That musical construction is familiar to a Dumas High School graduate who now composes scores for movies, and although he’s been away from Dumas since he graduated in 1974, his presence is here. Now. Literally. “War Room”, a movie that occupied the No. 1 spot in the U.S. for a week, beating “Straight Outta Compton” is playing at the Evelyn, and Paul Mills composed its score.

“Knowing the movie is playing in Dumas kind of reconnects you to your roots,” Mills said. “I’m proud of being from Dumas and having the small town experience. I’m the sum of a lot of positive parts that came from there.”

“War Room” is a faith-based film that has pulled in a 90 percent audience approval rating. Produced and directed by the sibling team of Alex and Stephen Kendrick, the movie has brought in over $65 million to date. A nice return, considering the brothers spent $3.5 million to make the movie.

“The marketing side of Hollywood respects ‘War Room’ for its financial success, but the critics hate it,” Mills said. “They don’t understand why it did what it did.”

Most people would be happy to work on one successful movie in a year, but there’s another movie currently playing that features Mills’ music. “Woodlawn”, a Christian sports drama directed by Andrew and Jon Erwin, another team of brothers, was released in October. Like “War Room”, its audience approval rating is high — 91 percent. Not bad for a Dumas boy.

Mills’ history in music is long, going back to his high school days, but the pursuit of it as a career almost didn’t happen. Mills has a passion for architectural design and art, and he took drafting courses in high school, along with being in band and choir. But as much as he loved music, he thought his future was in architecture.

“I had envisioned myself as an architect,” Mills said. “I had laid out my life in a very practical way. I loved music, but I didn’t think I could make a living as a musician.”

He had to convince the chairman of the music department that it was indeed where he was supposed to be even though the certainty of Mills’ success as an architect was almost a given. He had the talent, and he had the connections. One of his father’s friends owned one of Houston’s biggest architectural firms. Still, he took the leap and plunged into music. During the mid 70s, pop Christian music was big, and Mills joined a Christian band, dropped out of college and toured the country in a beat up Cadillac. He later returned to finish his degree in music theory and composition, going to school part time and working full time at a recording studio.

“I was one of the engineers at Rivendell Recorders, and I was the resident keyboard player,” Mills said. “I worked with a lot of R&B bands during that time. There were a lot of good ones in Houston, but they never wanted to start a session until 10 at night. We’d shut down about 6 a.m., I’d clean up the studio and then go to class.”

Mills lived in Houston for over a decade, co-owning a recording studio and honing his skills as a musician and recording engineer. He was building a reputation in the Christian music industry, playing keyboards for artists like Twila Paris. His weekends were full, flying to the cities where Paris and other artists were playing, then returning home to play at church on Sunday.

But in 1991, the force that had steered him away from architecture and pointed him to music, grabbed him again. Nashville beckoned. He was working in the music industry and establishing more contacts there, but after five years in his new home, Texas called. It was Jim Robinson, a friend who had moved from San Antonio to Los Angeles to pursue a film career, and he had an offer for Mills. They had worked together on videos and documentaries, and Robinson had a new project, a movie titled “Still Breathing.” He wanted Mills to work with him again.

“It was kind of cool,” Mills said. “Two fellow Texan transplants reconnecting for a cool movie.”

After composing the score for “Still Breathing” in 1998, he followed it with “God Provides” in 2009, “October Baby” in 2011, and in 2014 he composed the score for “Against The Sun”, a film based on the true story of three airmen who had to ditch their plane during a WWII scouting expedition and who were adrift 34 days without food or water.

The Erwin brothers directed the video series “God Provides”, which starred Dean Jones who was famous for his roles in several Disney movies, and in 2015, the Erwins then asked Mills to score “Woodlawn.”

“I had only six weeks to compose the score, but it’s epic,” Mills said. “I would work until 3 a.m. and sleep until 7 a.m. and get up and do it again. ‘War Room’ was a little better. I had about eight and a half weeks to do it.”

But through all the composing, all the engineering of the music that fills a movie theater and moves the audience’s emotions, there are echoes of the words Mills heard as a DHS student. The encouragements of his teachers and mentors, their verbal pushes that propelled Mills into making that turn from the University of Houston’s school of architecture to the school of music in 1974 still pulse in his work. But it was Larry Guess, his high school choir director, who threw down the gauntlet.

“Mr. Guess moved away my senior year to accept the Chairman of Music Department position at Temple Junior College in Temple, Texas,” Mills said. I was in His Children, a gospel group at First Baptist Church in Dumas, and we did a little Texas tour, doing a concert in Temple. That night, Mr. Guess asked me to have coffee with him the next morning before we left, and he said, ‘‘I hear you’re going to the University of Houston to study architecture. I’m just going to put it to you. You can always be practical, but you should chase your dream.’”

Mentors continued to influence him in college, one of them a piano teacher who taught him music was more than playing the right notes.

“She taught me about the soul of music, and I’m still connected to what she and all my other high school and college teachers started,” Mills said. “I can’t forget where I came from, and I don’t want to. The neat thing about Facebook is I can keep up with old gang and see what they’re doing. I’ve heard from some of them, and they tell me they’re going to see ‘War Room’ as a group. I like that. It’s almost as if I’m there with them.”

Mills is currently working on a Russian mixed martial arts film, and the movie industry’s leaders have taken notice of him after the success of “War Room.” That would please his parents who are now gone but who trusted his decisions.

“I know in his heart, my dad was worried when I decided not to go into architecture, but they were supportive,” Mills said. “To his credit, my dad said, ‘Do what you love and see what happens.’ I miss them a lot. And I definitely see God’s hand in my life. He doesn’t make your life perfect, but there is guidance.”

Perhaps Dumas’ claim to fame is more than the successes of those who grew up here and then went on to produce work that garners national acclaim. Dumas also has had those teachers and mentors who instilled in young people the courage to dream and gave them the skills to turn the dreams into reality.

“This year has been full of opportunity,” Mills said. “I know it all started in Dumas with my teachers there. I owe them so much, and I’ll never forget them.”