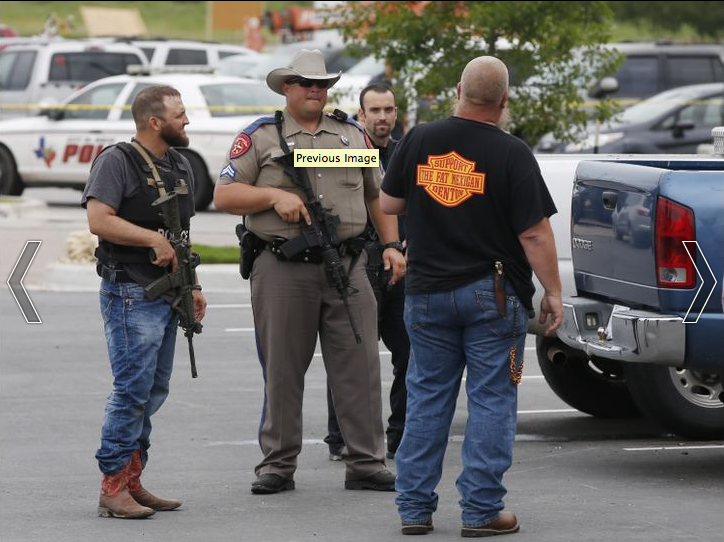 Above: Law enforcement officers talk to a man near the parking lot of a Twin Peaks Restaurant Sunday in Waco after a shooting involving rival biker gangs. Waco police Sgt. W. Patrick Swanton told KWTX-TV there were multiple victims after gunfire erupted between the gang members. (Rod Aydelotte/Waco Tribune Herald)

When a motorcycle gang decided to crash a biker event at the Waco Twin Peaks restaurant, it turned looming tensions between two outlaw groups into a deadly gun battle, information released Tuesday showed.

The Austin American Statesman reported that Sunday’s shooting — which apparently began with a parking dispute and someone running over a gang member’s foot — left nine bikers dead and 18 injured in a wild shootout that also involved police gunfire. In the aftermath, police have detained more than 170 bikers charged with first-degree felonies as authorities continue to sort through the bloodbath.

On Tuesday, details of the shooting became clearer as police filed their first batch of arrest documents against bikers from several gangs, including the two at the center of the shootout, the Bandidos and the Cossacks. A city of Austin employee and two other Austin area men were among those arrested.

The names of the dead also became public through preliminary autopsy reports that showed all those killed had died of gunshot wounds to different parts of their bodies.

Sgt. W. Patrick Swanton, Waco police’s spokesman, told reporters Tuesday that it was a rival gang that showed up uninvited to a “Biker Night” event at Twin Peaks that led to the shooting.

Arrest affidavits state that at least three Bandidos arrived in the parking lot of the restaurant located in the sprawling Central Texas Marketplace just off of Interstate 35 in southern Waco.

One man was injured when a vehicle rolled over his foot. That caused a dispute that continued inside the restaurant, where fighting began. Soon weapons — including guns, knives, chains, brass knuckles and clubs — were brandished and the melee spilled back outside, Swanton said.

Authorities offered few details. It was not clear which gang was responsible for running over the biker’s foot or which gang the aggrieved biker belonged to.

The meeting Sunday was a publicly scheduled Texas Confederation of Clubs and Independents grassroots meeting, typically held to discuss legislative and safety issues, a gathering that has happened regularly across the state for years without any violence, sources familiar with the meetings said.

“They’re meeting as a grass-roots movement to discuss biker rights,” said said a top Bandidos member from Austin, nicknamed Gimmi Jimmy, in an interview with the Los Angeles Times on Tuesday. “That’s not illegal. There’s nothing illegal about that; it was not a criminal.”

But Waco police said they received intelligence “from a very good intelligence officer” at least a week before the scheduled meeting.

“They weren’t here to drink beer and eat barbecue,” Swanton said of the bikers. “They came with violence in mind.”

That the Bandidos would respond with hostility to another biker gang’s incursion into Texas is no surprise. As the American-Statesman reported Monday, the Bandidos emerged as the most powerful biker gang in Texas more than two decades ago.

In the past two years, the Bandidos and Cossacks have had several violent run-ins as part of what police have described as a turf war between the two gangs.