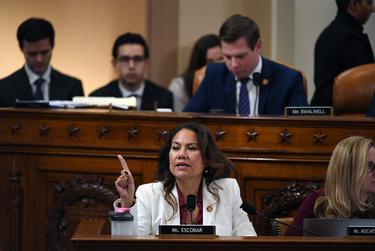 U.S. Rep. Veronica Escobar, D-El Paso, joined nine other congressional Democrats on Wednesday in adding their names to a lawsuit against former President Donald Trump and his attorney, Rudy Giuliani, for conspiring with right-wing extremists to incite a riot at the U.S. Capitol to prevent Congress from certifying the 2020 election results.

The lawsuit was initially filed by the NAACP, U.S. Rep. Bennie Thompson, D-Mississippi, and civil rights law firm Cohen Milstein Sellers & Toll in mid-February. It argues that Trump, Giuliani and extremist groups like the Proud Boys violated the 1871 Ku Klux Klan Act, which was “in response to KKK violence and intimidation preventing Members of Congress in the South during Reconstruction from carrying out their constitutional duties,” according to the NAACP.

The amended complaint adds into the record statements from members of Congress who were inside the Capitol as rioters stormed the building, essentially helping the plaintiffs build their case against Trump and Giuliani.

In Escobar’s statement, she recounts receiving text messages from her family asking if she was safe and noticing House Speaker Nancy Pelosi and other people being escorted away by law enforcement officers. She recalls hearing shouts, banging from the outside, being instructed by police to wear a gas mask and how “her heart began racing” as the riot unfolded.

“Her fears were heightened even further when the Capitol Police informed her that tear gas had been released in Statuary Hall and she realized she did not know how to properly wear the gas mask provided her,” according to the amended complaint.

Escobar, along with the other members of Congress at the Capitol, were all eventually evacuated to the opposite side of the House gallery and had to lie down on the floor, according to her account. She recalled seeing Capitol police standing behind a door barricaded by furniture with their weapons drawn and feeling her safety was “in great jeopardy.” She was in the House chamber until about 3 a.m. the next day.

“This is the second domestic terrorist attack I have personally lived through, and I will say again what I said on Aug. 3, 2019: Words have consequences, and I hold Donald Trump responsible for the words he uses to fuel hate, sow division and spread lies that have led to America’s darkest days,” Escobar said in a video following the Capitol riot, referencing the date of the deadly mass shooting by a racist gunman at a Walmart inside her district at the first attack.

A spokesman for Trump has previously denied that the former president played a role in inciting the riot.

“President Trump did not incite or conspire to incite any violence at the Capitol on Jan. 6,” the spokesman, Jason Miller, said in February.

The other members of Congress who joined as plaintiffs recounted similar experiences of how the insurrection unfolded and the fear and panic they experienced.

In the aftermath of the Jan. 6 insurrection, the U.S. House swiftly impeached Trump for a second time. Congressional Republicans decried the move as inappropriate but nodded at the possibility of the judiciary being the final arbiter of justice.

“Impeachment was never meant to be the final forum for American justice. … We have a criminal justice system in this country. We have civil litigation. And former Presidents are not immune from being held accountable by either one,” Senate Minority Leader Mitch McConnell, R-Kentucky, said on the Senate floor in February.

U.S. Sen. Thom Tillis, R-North Carolina, said in a public statement that “the ultimate accountability is through our criminal justice system where political passions are checked.”

The NAACP lawsuit is in tandem with another similar lawsuit filed by Congressman Eric Swalwell, D-California, against Trump, Giuliani, his son and a Republican congressman for their respective roles in causing the insurrection.