Home NEWS TxDOT to Dumas: Tell us what you want to do 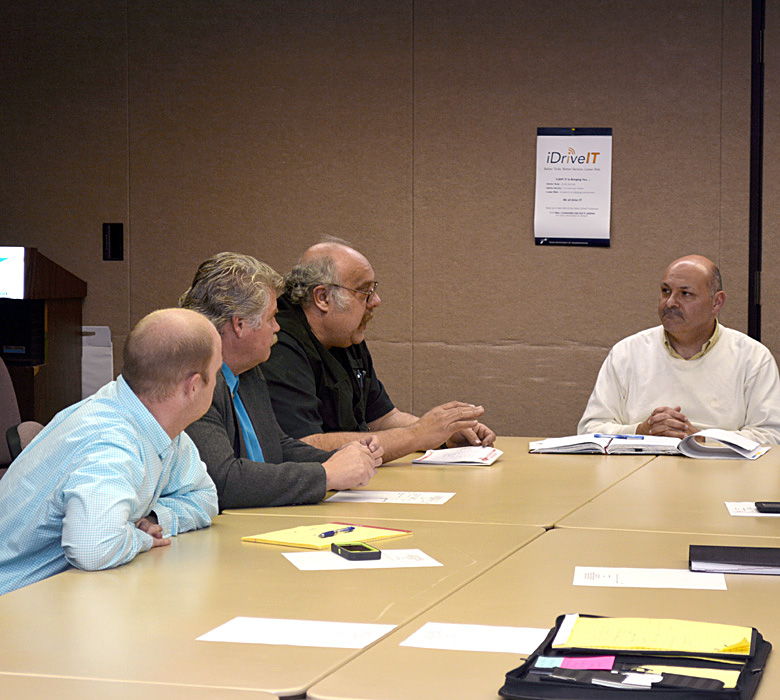 A meeting attended by a group of Dumas officials and TxDOT representatives Thursday shined a sliver of light on the hope that a decision can soon be made on how to resolve Dumas’ growing traffic problems. Some of those Dumas officials’ reluctance to work and communicate with TxDOT’s Amarillo District and their inability to come up with a plan are largely responsible for Dumas Avenue’s proliferation of potholes.

Gus Khankarli, TxDOT Director of Transportation, Planning and Design, told the Dumas group they need to decide what they want to do so TxDOT can get to work.

“TxDOT is not in the business of forcing anything on anybody,” Khankarli said. “What do you and the community want? Once you answer that question clearly, then we can work on the details.”

But Dumas officials haven’t been able to agree on what they want. A group of city commissioners have opposed a truck relief route, and Dumas Economic Development Corporation Executive Director Mike Running has strongly opposed it, going so far as to calling Khankarli a “charlatan” in an email to the commissioners. Moore County Judge Rowdy Rhoades, however, said the Moore County Commissioners Court is ready to pass a resolution to go forward with the relief route to help Dumas’ downtown traffic problems.

“We do know Dumas is growing,” Rhoades said Thursday. “The majority of the businesses don’t rely on out-of-town traffic. The right thing for the community is we have to get the trucks off the streets. We have tremendous traffic. We’re going to have to stand up.”

U.S. Representative Mac Thornberry, R-Clarendon, earmarked $5 million for a relief route in 2005, but inflation has diminished how far that money can go, and the estimate now is that it will take about $10 million to complete the relief route. Khankarli said he can fill in the money gap, but, again, he needs to know what Dumas wants.

“I don’t think we’re ready to make a decision about concrete or a bypass, but we do have issues with the street, and people want to get something done,” City Commissioner Steve Bodnar said.

Covering Dumas Avenue with concrete has been discussed, and some of the city commissioners who oppose building a relief route, favor concrete. TxDOT has the concrete project on their 2018 calendar, whether Dumas officials make up their minds or not, but those people who attended Thursday’s meeting — Mayor Pat Sims, commissioners Bodnar and Justin Willis, Rhoades, City Manger Arbie Taylor and Dumas Economic Development Corporation Treasurer Bob Brinkmann — were told that while TxDOT is working on plans to build the relief route, they also could be covering Dumas Avenue with concrete.

The issue then returns to — what does Dumas want?

The City Commission agreed to hold a public forum Jan. 25 to discuss the options with residents who are just as divided on a course of action as the officials. Some of them say a relief route will catapult Dumas into an economic decline, and others say the traffic on Dumas Avenue has to be reduced, and it will have little effect on downtown commerce.

The lack of action and the adversarial relationship some Dumas officials have created with TxDOT have brought any plan to an almost standstill, and the cratered condition of Dumas Avenue is the evidence. In the meantime, the financial clock is ticking, and inflation eats at the $5 million earmarked for the relief route. Khankarli repeated several times that not only must Dumas come up with a plan, it’s important for Dumas and TxDOT to work as a team. He referred to the highway construction in Dalhart and said it moves forward because that city works with TxDOT.

So what to do, considering covering Dumas Avenue with concrete causes as much gnashing of teeth as the relief route? Some business owners have told the City Commission the project would disrupt and even prevent their customers from accessing their businesses, but Taylor said the city is prepared to do everything to get those customers to where they want to go. The commissioners have discussed using shuttles to take customers from parking lots to the stores and other businesses, and Taylor affirmed Thursday the city is still committed to doing that.

Taylor turned the conversation to what he called “the gorilla in the room” — the cost of moving the utilities under Dumas Avenue for the concrete project. He told Khankarli the city is ready to submit affidavits to show the utilities were in place when TxDOT took possession of the street in the 1930s. Khankarli said he would submit those documents to attorneys to determine who would be responsible for the cost of moving the utilities, and if the documents support the city’s position, TxDOT will pay to move them. If they don’t, the city will have to pay, and Taylor said that right now, they don’t have the money.

In the next part of this two-part series, the Journal will report on the details of what is involved with the concrete and relief route projects, using illustrations. Traffic lights, right-turn lanes, right of ways and time frames will be discussed in that report. The public forum is scheduled for 6 p.m. Jan. 25 at the Moore County Community Building. In the meantime, TxDOT’s local maintenance crew plans to patch Dumas Avenue as the weather permits.