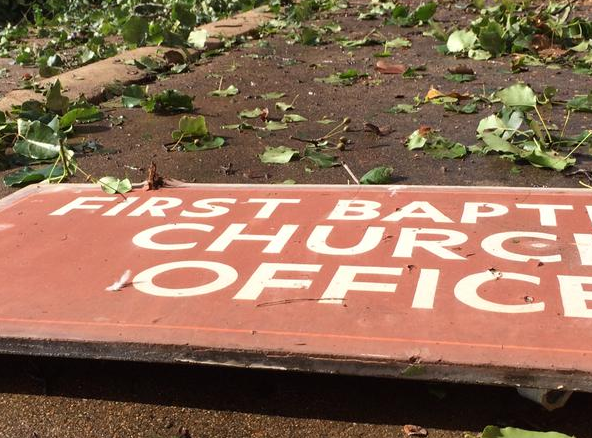 Above: The First Baptist Church in Mineral Wells lost walls, windows and has downed trees after a tornado hit the city Tuesday evening. (Photo by Caty Hirst)

The Fort Worth Star Telegram reported that  tornado touched down in downtown Mineral Wells shortly after 7 p.m. Tuesday, causing an abandoned bank building to collapse, filling the air with debris.

The twister came close to the Mineral Wells Police Department, but did not damage the building, a police dispatcher said.

Police were still trying to assess the damage at 8 p.m.

A report of a second tornado came in at 7:45 p.m., but the National Weather Service could not confirm that.

“Reports are very sketchy right now,” Tom Bradshaw, a weather service meteorologist in Fort Worth, said at 8:10 p.m. “Reports of a second tornado northwest of town have come in, but we have no confirmation of that at this present time.”

The storm was moving into Wise County. The greatest tornado threat was northwest of Jacksboro at 8:25 p.m., according to the weather service.

A tornado warning for Jack, Palo Pinto, Parker and Wise counties is in effect until 8:30 p.m.