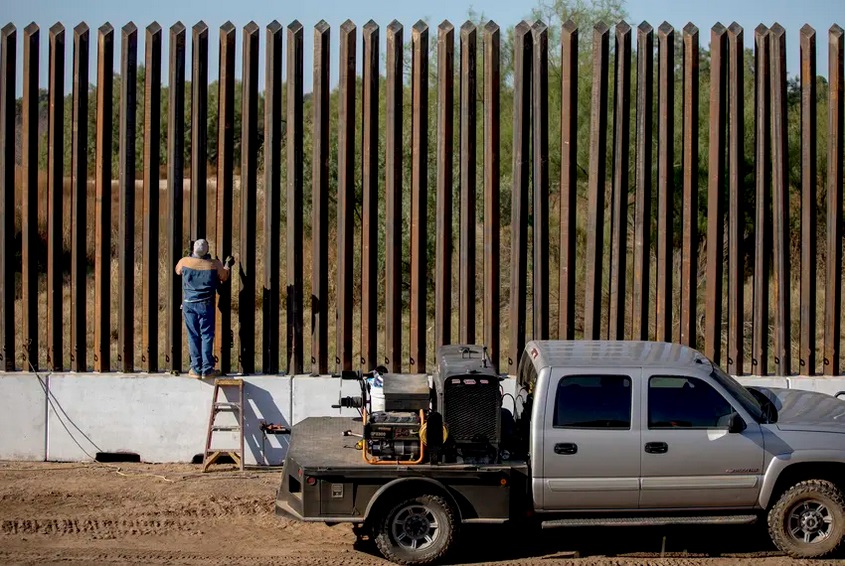 Now 1,700 unused panels — declared surplus property by the federal government — have been shipped from California to help build Gov. Greg Abbott’s state-funded wall, according to spokespeople for the U.S. Department of Defense and the Texas Facilities Commission.

The Biden administration halted virtually all work on the federal wall in January 2021. Lt. Col. Chris Mitchell, a spokesperson for the Department of Defense, which had been in charge of awarding some of the federal wall contracts under Trump, said the 32-foot-tall steel bollard panels were at a storage site in San Diego.

Francoise Luca, a spokesperson for the Facilities Commission, said the state didn’t have to disclose to the federal government that it planned to use the panels for Texas’ border wall project, adding that the state followed the surplus program’s rules.

In December, the Facilities Commission hired New York-based Posillico Civil Inc. to haul the panels from San Diego to Eagle Pass at a cost of $2 million, according to the contract awarded to the engineering firm. The company finished the job earlier this month.

Luca said the panels are being stored in “a temporary and secured area” in Maverick County under the watch of the Texas National Guard.

With the 1,700 donated panels, the state can erect roughly 1.3 miles of border barrier. Luca said the panels “will be used in the near term” but didn’t say where on the Texas-Mexico border they will be used.

Scott Nicol, a McAllen-based environmental activist, said Biden has broken his pledge not to use taxpayer money to build a wall, pointing to one project in the Rio Grande Valley where crews erected 15-foot concrete panels near the border that the federal government calls levees.

And now “the Biden administration is saying, ‘We won’t build these border walls, but if Abbott wants to build them, we will give him free bollards,’” he said. “The problem with border walls isn’t who is building them, it is the devastation that comes when they are built.”

Nicol said regardless of who is building border barriers, the wall will block the movement of endangered species like ocelots and could cause dangerous flooding.

In June 2021, five months after Biden took office, Abbott announced that the state would build its own wall along the Texas-Mexico border, funding it with state money and private donations. The state has $1.05 billion dedicated to the project — which includes $55 million in private donations as of Feb. 11.

Eight months into the effort, the state has completed 1 mile of barrier in Rio Grande City in Starr County. The Texas General Land Office owned the land, and the Texas Facilities Commission paid $125,000 for it.

That’s just over $20 million a mile. By comparison, border wall construction under the Trump administration ranged from $6 million to $34 million per mile, according to a Texas Tribune analysis.

The state has said some border residents have offered to donate land to have barriers built on their property. But the state has refused to release the names of those private landowners or the location of those properties, saying that if those details were made public, the properties could be targeted by criminals and owners could drive up the land prices and hurt the Facilities Commission’s negotiations — an indication that the state is also looking to purchase property, although that option hasn’t been publicly discussed.

Disclosure: The Texas General Land Office has been a financial supporter of The Texas Tribune, a nonprofit, nonpartisan news organization that is funded in part by donations from members, foundations and corporate sponsors. Financial supporters play no role in the Tribune’s journalism. Find a complete list of them here.

This article originally appeared in The Texas Tribune at https://www.texastribune.org/2022/02/15/texas-border-wall-federal-surplus-abbott/.