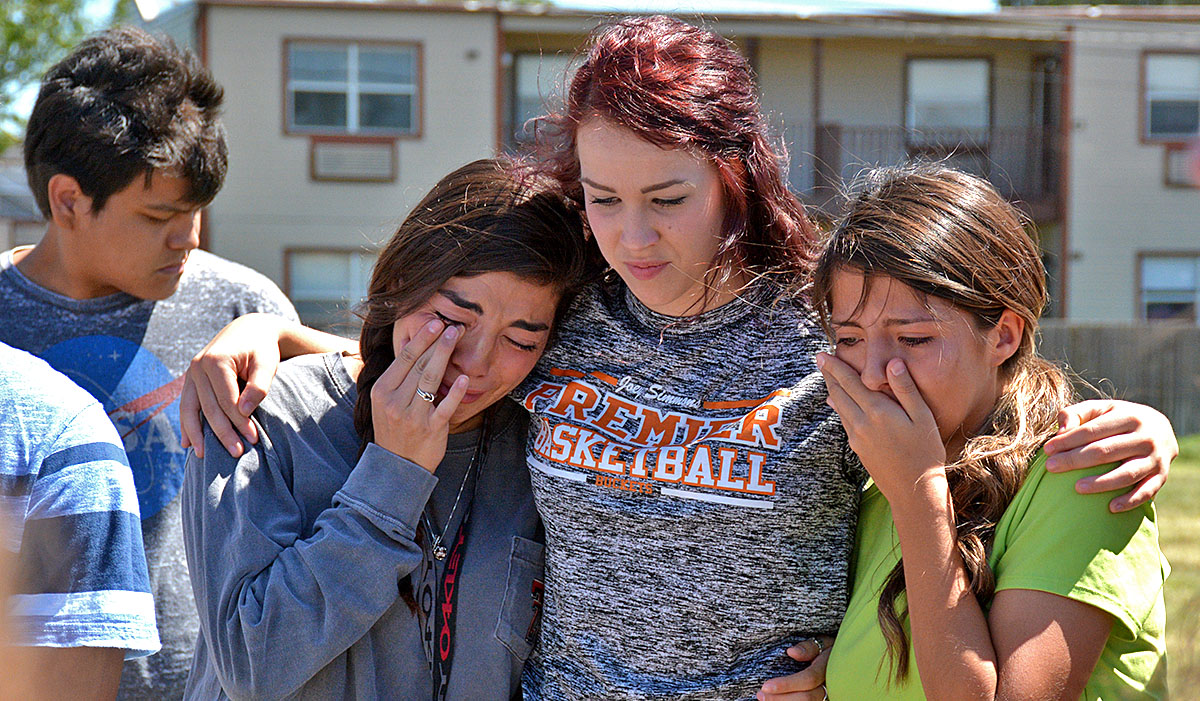 Above: Dumas High School students mourn the death of Coach Ryne Erickson at a memorial organized a few hours after he was killed by a hit-and-run driver Sept. 11, 2016. (File photo)

Almost a year after his death, Coach Ryne Erickson’s clothes still hang in his closet. His favorite blanket, emblazoned with the logo of his beloved Chicago Cubs, spills over a chair in the home he shared with his widow, Jamie, who will probably never depart with it.

“Some of Ryne’s things are sort of half-way packed, but they’re kind of random stuff,” Jamie said. “I took four boxes of his personal books, the ones he used for teaching, to the school’s history department. I thought they could use them, but other things are still here as he left them. I kind of commandeered the Cubs blanket a long time ago, so that’s something I’ll keep.

Coach Erickson was killed by a hit-and-run driver at the intersection of East 7th Street and Melinda Lane in Dumas at about 3 a.m. Sept. 11, 2016. Officials arrested Kaden Thornburg, who was 19 years old at the time, later that day for the crime, and on Monday, he will be sentenced in the district courtroom at the Moore County Courthouse. Jamie, along with several family members, will be there, some to testify, others there to buoy up the emotional strength Jamie will need to speak openly about Ryne’s death. It will be the first time she will see Thornburg.

Thornburg pleaded guilty to leaving the scene of an accident that caused seriously bodily injury or death, and his plea bargain calls for a sentencing range from probation to 15 years in prison, an agreement Coach Erickson’s uncle, Don Haydon, calls offensive.

“When I heard probation was on the table, I couldn’t believe that an individual who did what he did could be considered for probation,” Haydon said. “I don’t see the probation option as one of being in synch with what I saw in the community after Ryne was killed. I saw a community in anguish, a student body deep, deep in grief. I couldn’t believe there was a chance Mr. Thornburg could get probation for what he did.”

Coach Erickson was 30 years old when he was killed and had begun his ninth year with Dumas ISD. He taught history and coached cross country, track and basketball. His sudden and violent death plunged students into grief. Some of them organized a memorial later that morning at the scene of the hit and run, placing flowers and messages of love for their coach and teacher. Later that evening, a large crowd of students led a candlelight vigil at the scene, the beginning of what turned out to be a period of mourning that lasted weeks.

The sorrow that struck the student body and the community also reached rival teams in area cities. The athletic community pulled in and offered comfort to the Dumas athletes, putting up posters in their gyms when they played Dumas. The Palo Duro volleyball team presented a rose to each Demonette before their game began, and in Dumas, the student body at the football games wore red in memory of their coach.

“Ryne was the definition of what it means to be a good human,” Haydon said. “His best years were on the horizon, and to say that you leave that experience with a scorched heart is an understatement.”

Haydon, frank and transparent, says he wants Thornburg to go to prison. He isn’t content to wait for any divine justice; he wants it “now and right here.” Coach Erickson’s mother, Kittye, gets through her days of missing and mourning her son by relying on her unshakeable Christian faith, and it’s that faith she says helps her accept whatever sentence the court determines. Jamie also wants Thornburg to go to prison, but she says she doesn’t think about him.

“I don’t think I’ve forgiven him, but I haven’t given him a whole lot of thought,” Jamie said. “He killed my husband, but to me he’s just that kid over there. I don’t want to mix my memories of Ryne with Kaden Thornburg.”

The possibility that Thornburg would take his case to trial horrified Jamie. His guilty plea spared her that, but the sentencing won’t be any easier, she said.

“I was in shock when Ryne was killed, and it was probably not until January that the reality of his death hit me,” Jamie said. “It took me awhile before I was outwardly emotional, and then I would just cry randomly.”

Shock protected Jamie from severe emotional pain during the first few months after her husband’s death, but then it wore off, leaving her vulnerable to the news given to her in July that Thornburg would be sentenced Aug. 21. It sent her reeling.

“It hurt worse,” Jamie said. “Knowing I would be in the courtroom and testifying at Mr. Thornburg’s sentencing sent me back to how I felt in January.”

Jamie and Coach Erickson had been married two years and were making plans to start a family. She teaches at Green Acres Elementary School, and Coach Erickson was working on his master’s degree. Both of them loved their jobs, Jamie said.

“I have no plan now, and the fact that I don’t know what to do is out of character for me,” she said.

Preparing for Thornburg’s sentencing worries Jamie because she says she has never had any dealings with the judicial system, but it’s the reality of being in the same room with Thornburg that causes her more angst.

“I want to remember Ryne with me,” Jamie said. “I want to remember him as my husband. I’m afraid that seeing Mr. Thornburg is going to change that. I know it’s important that I be at the sentencing, but my heart and brain are fighting each other.”

Although Jamie has prepared herself testify at Thornburg’s sentencing, she says she has nothing to say to him.

“I’m just trying to focus on the things I loved about Ryne instead of how he died and how he was taken from me,” she said. “I don’t want to pick at the wound.”

Thornburg’s sentencing is set for 9 a.m.

And the creek did rise