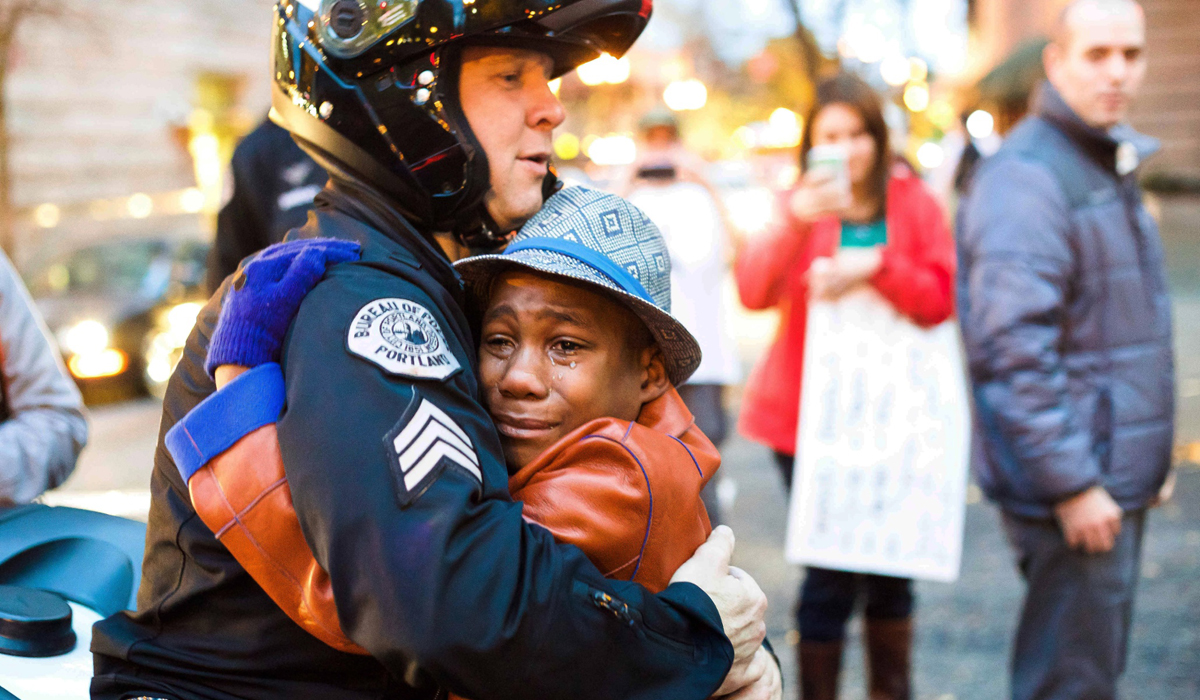 Portland Police Sgt. Bret Barnum and Devonte Hart hug during a Ferguson-related protest in 2014. — The Oregonian

In the year I’ve been publishing the Journal, I can count on one hand the number of readers’ comments I’ve deleted because of their bad language or outright disrespect. The same goes for the number of times I’ve responded to a reader’s comment. However, that isn’t true for the many times I’ve wanted to respond. I’m human, a flawed one who would just as soon settle an argument outside as look at you, and knowing that, I tell myself it isn’t nice and would only draw a crowd with cellphone cameras. Also, a nagging weight gain has limited the number of shirts I have that fit me, so I have to take care they don’t get ripped while I’m being whupped on in public.

Since the number of comments I’ve had to delete are so few, I think it says a lot about the readers. Y’all are respectful, intelligent and engaging. I have to be honest with myself, though, and say that the number of times I’ve wanted to respond to a comment is only a reflection of my insecurities, a button someone pushed that should have hit a dead wire and not a live one. Those are my issues, and I know that.

But I’ve been mulling over a comment posted yesterday on the police report, and I’ve decided that comment doesn’t deserve my comment in reply. It deserves a full-blown editorial. In that post, a reader said cops will find a reason to search a vehicle even if the driver doesn’t give them permission because everyone knows how crooked the cops are. Sorry, reader, if you get angry over this, but you said it and should expect it to be challenged. Other readers are free to like his comment. But I don’t.

Are there crooked cops? Absolutely, because their ranks are comprised of humans who sometimes don’t tow the line the law and their supervisors establish. There are cops who have stolen, beaten people up or lied. But that’s not a cop issue. It’s a human issue. We don’t shut down the medical profession because there are some stupid or unethical ones. We don’t close the schools because a teacher abused a student. Why? Because they are the exception. Out of one bad cop, doctor or teacher, there are thousands of good ones.

Before you complain about a crooked cop, think about what could happen each time any cop makes a traffic stop. They don’t know what’s waiting for them inside that car. It could just be a mom in a hurry to pick up her kid at soccer practice. But too many times, it’s someone with a gun, waiting for the cop to get a little bit closer.

The cops really like to ruin our fun, don’t they? They chase down people who get it in their heads to drive 100 mph down Dumas Avenue, endangering many lives, including their own. They don’t let us shoot our guns inside the city limits or beat up our spouses. They don’t let people rob stores, all because they’re such busybodies and are always up in our business. Don’t they have anything else to do but worry about what we’re doing?

But lets’ talk about what they do that doesn’t make the news. Many times when they respond to a domestic call and see hungry children, they take money out of their wallets and buy them food. When they see a living room without a Christmas tree, much less any gifts, they go to Walmart and buy the kids in that bleak home presents. Do you think they can really afford to do that? Dumas police officers are woefully underpaid, and they do their jobs driving vehicles that should have been replaced years ago. Each time they respond to a call, they consider the danger, sometimes deadly, that might be waiting for them, but they still go. Each time they leave their homes for work, their spouses say a prayer they’ll return. One of the police reports published Monday said that when a cop stopped a man, he saw a pistol in plain sight, and he found a bag of meth. Sorry, but I’d prefer a cop arrest a guy carrying a pistol and drugs. Just not a good combination.

By no means do I think every cop is perfect and walks the straight and narrow, but I don’t expect that of any profession. Those flawed ones are exposed and weeded out. Also, anyone who thinks a cop has broken the law can address it. If you’re not satisfied with the way your complaint is handled, you can take it up another notch in the chain of command. Make enough noise, and you’ll be heard. Just as you would with a bad teacher, lawyer or doctor.

But if you think all cops are crooked, I guess you can just shrug your shoulders when your home is burglarized, when you see a child with bruises or when a speeding driver almost T-bones you. And ask yourself this. Did you feed those hungry kids whose parents spent all their money on drugs? Did you put your life on the line when a drunk and angry man held a pistol to his wife’s head, and you had to talk him down? Did you comfort a child whose father was just arrested for violent domestic abuse?

There is no profession comprised of perfect employees. But I’m glad men and women still choose law enforcement as a career regardless of its imperfections, low pay and dangers. God bless them.