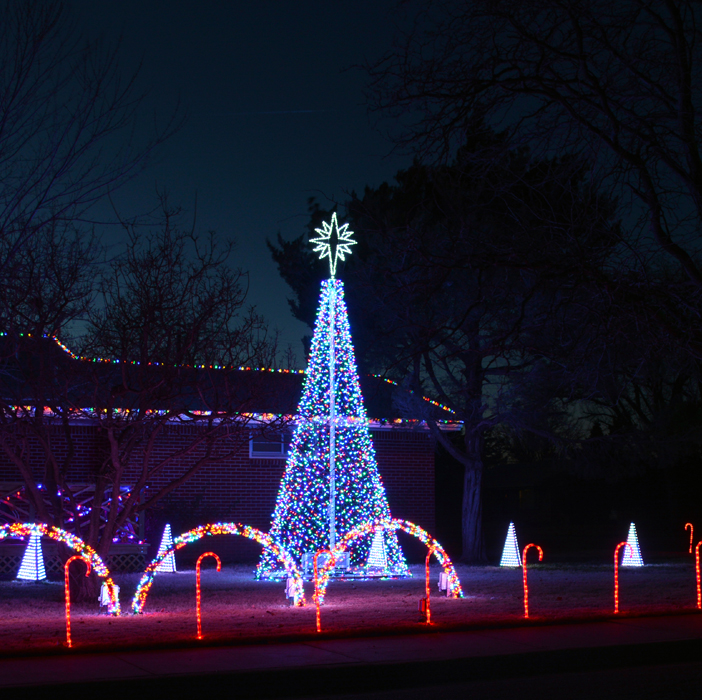 Above: The “mega tree” is the focus of Daryl Barber’s light and music show. He begins assembling the display the day after Halloween, so he can flip the switch on Thanksgiving night.

Dumas might not rival Paris for the title The City of Light, but there is a house on Powell Avenue that might be able to fit into a corner of Times Square’s expanse of flashing colored lights. On any night, a stream of cars, and even bus-loads of children, drive by 202 Powell Ave. to marvel at the brilliantly lighted Christmas display Daryl Barber engineered — and then set to music.

If you haven’t driven by Barber’s house, you need to. Two conical trees fashioned of metal and elaborately draped in multi-colored lights anchor his front yard. One of them, the one he calls the “mega tree”, has ribbons of lights that move in patterns that would do any Las Vegas casino proud. In between the trees, more lights of many colors cover several small arches like icing with sprinkles. Lighted candy canes border the display, and a large snowflake fastened to the house’s chimney shines like a torch over the splendor of lights.

Barber said he begins setting up the display the day after Halloween to have it ready to plug in Thanksgiving night. He carefully places the 20,000 lights in their places on the frames he knows well. He should. Except for the candy canes and the snowflake, Barber built everything, including the circuit boards that control the patterned lights. He thinks he has about $12,000 invested in this “hobby.”

“It’s worth it,” he said. “Church buses will bring kids to see it, and I can hear them from inside the house. I love their reactions to the display.”

Through the night, cars will park in front of Barber’s house to watch, and listen. Not only did he engineer the complicated light show, he synchronized it to music. His audience can tune to 99.7 and listen while they enjoy the production that lasts 23 minutes.

Barber began putting the show together on a dare from his daughter in 2011. He said he always decorated his house with Christmas lights, but she saw something on the Internet that took holiday decorated to a higher level — animation. He introduced the “mega tree” and the miniature trees the first year.

“The mega tree has 48 strands of lights,” Barber said. “I spent every night and weekends for two months building it. Getting the geometry was tough, and then I had to figure out to make the strands of light move in the patterns I wanted.”

So how do his neighbors feel about living next door and down the street from this dazzling show?

“I have fantastic neighbors, and I think they love it,” Barber said. “They don’t get upset about all the traffic.”

Along with his job as the service manager at Green Country Equipment, Barber works on improving the display all year. He listens to Christmas music year long, looking for additions to the production, and he adds other elements each year.

“I really love this,” he said. “When I come home from work, I slow down to enjoy it. I love the colors, and I like that people can sit in their warm cars, listen to the music and watch the display.”