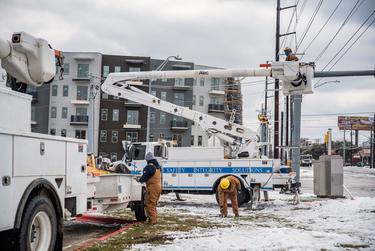 ​The state’s energy grid operator overcharged power companies by roughly $3 billion after the winter storm, the chairman of Texas’ utility regulator said Thursday, pushing back on a previous report from an agency watchdog that said the companies were overcharged by $16 billion.

Last week, an independent monitor for the Public Utility Commission reported the Electric Reliability Council of Texas overcharged power companies by about $16 billion in the days immediately following the February winter storm which knocked out power for multiple days across the state, leaving people in subfreezing temperatures. The eye-popping number prompted calls for action from elected officials including Lt. Gov. Dan Patrick demanding the charges be reversed.

But on Thursday, Arthur D’Andrea, PUC chairperson, called the figure a “mistake” and said the firm, Potomac Economics, would be officially revising its estimate. Later in the day, former ERCOT CEO Bill Magness submitted a report pushing back on the claims it overcharged to such extremes.

“This was an intentional and carefully considered decision to protect human health and safety while stabilizing the electric grid. It was not an error,” Magness’ report said.

But a letter submitted Thursday by Potomac Economics repeated that ERCOT overcharged companies by $16 billion. However, Potomac clarified its recommendation for how much should be fixed, calling for a $4.2 billion price correction.

Last week, the PUC said it would not retroactively reduce the market price for power to account for overcharge payments, citing unforeseen consequences. On Thursday, D’Andrea stood by that decision and said he would not reverse charges to account for even the revised figures, citing unforeseen consequences. D’Andrea is the last remaining member of the three-person board which oversees ERCOT, after the other members recently resigned amid criticism for the power outages.

It is still unclear whether and how this overcharge directly affects Texas electricity customers, however many power companies have taken a significant financial hit.

In Texas, wholesale power prices are determined by supply and demand: When demand is high, ERCOT allows prices to go up. During the storm, the PUC directed the grid operator to set wholesale power prices at $9,000 per megawatt-hour — the maximum price. Raising prices is intended to incentivize power generators in the state to add more power to the grid. Companies then buy power from the wholesale market to deliver to consumers, which they are contractually obligated to do.

But extended freezing weather made that impossible because it knocked a large portion of the state’s electricity generation offline.

ERCOT maintained its highest level of emergency alert until the morning of Feb. 19 — five days after the storm initially struck the state — a signal to the market that the power grid was still unstable, which kept prices high.

“What we’re discussing here is whether or not we want to go back and change the rules of the game after the game’s been played,” said state Rep. Chris Paddie, R-Marshall, chairman of the House Affairs committee.

Speaking to the committee Thursday, D’Andrea pushed back against officials who earlier this week wrote in a letter calling for D’Andrea to change his mind about retroactively reducing the market price for power.

“I think they’re relying on wrong information given by the independent market monitor,” D’Andrea said of Patrick and state senators who urged a reversal.

D’Andrea said the electricity market from the week of the storm has been settled and the participants in that market operated under the rules set by ERCOT and the state. Already, some Texas consumers and companies such as Brazos Electric Power Cooperative have already been hit financially. D’Andrea said retroactively adjusting the market would lead to unforeseen problems.

“We know who’s hurt, let’s address that,” D’Andrea. “Instead of making a huge mess that we can’t foresee, and losing twice, let’s just stick with the status quo.”

State Rep. John Raney tests positive for coronavirus after being inside...

Here’s how Texas elections would change, and become more restrictive, under...

Alcohol to-go from restaurants gets closer to becoming permanent as Texas...