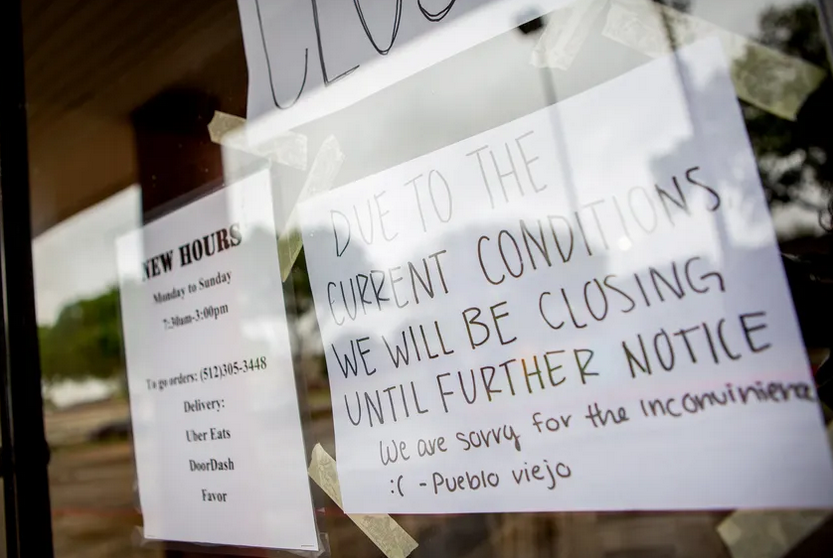 “It’s up to probably 9%,” Hegar said, speaking on air to the Texas Standard. “And I have no doubt that people are going to start forecasting it’s going to be slightly in the low double digits.”

A spokesman for the comptroller’s office later clarified that the unemployment rate is not currently at 9%, but that is where economic research firms have moved their forecasts.

“We don’t yet know what it is and the Comptroller’s point is the projections for it are worsening rapidly,” spokesman Chris Bryan wrote in an email.

Crossing into the double digits would surpass Texas’ worst-ever monthly unemployment rate — 9.2% in November 1986, according to the U.S. Bureau of Labor Statistics. The sinking employment numbers come as the state’s largest counties have ordered residents to stay home in the absence of a statewide mandate, and Gov. Greg Abbott last week ordered restaurants and schools to close, among other actions that have left people without work.

In conjunction with an ongoing oil price war between large oil exporters Saudi Arabia and Russia that’s affecting the oil and gas industry in Texas, economists said the state’s economy is likely to enter an unprecedented stage.

During a conference call Sunday, Hegar told lawmakers he has notified state agencies that they need to prepare to make budget cuts. The nosedive in oil and gas prices will also hurt the state’s multibillion-dollar Economic Stabilization Fund, also known as the rainy day fund, which is funded in part through oil and gas severance taxes.

COVID-19 has impacted every industry in Texas, and Larry Stuart, an employment lawyer in Houston, said he can’t remember anything like it in his 23 years in the business. Unemployment insurance claims filed with the Texas Workforce Commission reached 16,038 from March 8 through March 14, the agency said in its latest release, compared with 11,556 claims filed during the same week in 2019.

But the agency accidentally released those numbers, and a spokesman said the agency will no longer provide numbers ahead of the monthly releases, only “after official release to the Department of Labor.”

“This is to ensure the security of the data and to prevent anyone from benefiting from early access to the data, which can influence stock and bond markets,” agency spokesman Cisco Gamez wrote in an email.

This was a candid explanation, Stuart said.

“It’s actually a remarkably honest answer: ‘We don’t want to spook anybody because we’re not convinced these numbers are indicative of longer-term trends,’” said Stuart, who is also a business professor at Rice University. “Maybe that’s their thinking. Maybe.”

Stuart and other analysts said the days of record low unemployment rates across the country aren’t likely to return any time soon. In January, 17 states recorded their lowest-ever unemployment. Texas was a decimal point off in January from its best-ever monthly unemployment rate of 3.4% in June 2019.

Unemployment data for March will be released April 17, Gamez said.

Disclosure: The Texas Comptroller of Public Accounts and Rice University have been financial supporters of The Texas Tribune, a nonprofit, nonpartisan news organization that is funded in part by donations from members, foundations and corporate sponsors. Financial supporters play no role in the Tribune’s journalism. Find a complete list of them here.