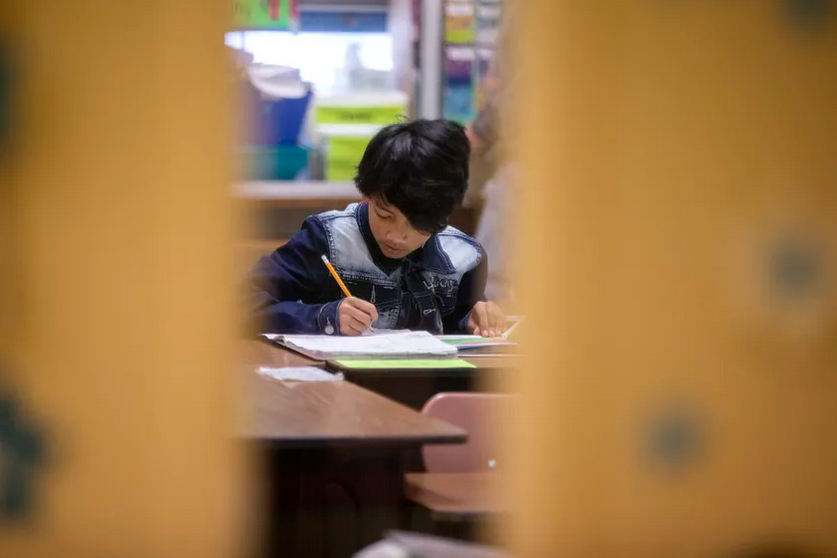 Texas public school students will still take the STAAR test this spring, but the state will not rate schools and districts based on their results, the Texas Education Agency announced Thursday.

The announcement comes as districts report alarming numbers of students failing at least one class this fall and thousands of students who have not showed up to online classes or turned in assignments. In normal years, Texas rates its schools and districts on a scale from A through F, based in large part on the scores students receive on the standardized tests.

“The pandemic has disrupted school operations in fundamental ways that have often been outside the control of our school leaders, making it far more difficult to use these ratings as a tool to support student academic growth. As a result, we will not issue A-F ratings this school year,” Texas Education Commissioner Mike Morath said Thursday in a statement.

For months, school superintendents and advocates have called on state leaders to cancel the STAAR exams, which are administered to students in third through 12th grade each year. In November, lawmakers asked the TEA to ask for a federal waiver to cancel the standardized test.

Morath has continually rejected the idea of canceling the exams, arguing they are a useful way to determine how much learning students have lost during the pandemic. But he said in November that he was reviewing exactly how those student scores would be used to rate schools and districts.

In November, 12 superintendents joined business leaders to ask that Morath keep the STAAR in 2021 but suspend ratings. “We think it is critical for government leaders and policy makers to fully understand the extent and the disproportionate nature of COVID-19 learning loss that has likely occurred for our communities from limited income homes and our communities of color as they are asked to make critical and equitable resourcing and policy decisions for our state’s 5.4 million children in K-12,” the letter stated.

Last spring, Texas applied for and received a waiver from the federal government allowing it not to administer the STAAR test. It is unclear whether President-elect Joe Biden’s administration will offer similar waivers in 2021.

“Texas students will still take STAAR tests in 2021, but schools won’t be rated on them” was first published at https://www.texastribune.org/2020/12/10/texas-staar-tests-school-ratings/ by The Texas Tribune. The Texas Tribune is proud to celebrate 10 years of exceptional journalism for an exceptional state.