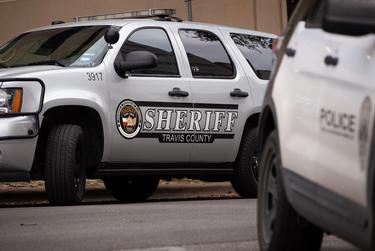 A sheriff’s patrol vehicle parked outside the Travis County Courthouse on March 22.

The Texas House on Monday advanced the Senate’s proposal to require voter approval before law enforcement budget cuts after having made a substantial change: Senate Bill 23 would only apply to counties with more than 1 million residents, not city governments or less populated jurisdictions.

The bill is part of a Republican-led effort to protect law enforcement funding after civil rights advocates last year called on local governments to reduce what they spend on policing and to reform police behavior, leading Austin to cut its police budget. The demand for systemic change came in the wake of repeated law enforcement killings of Black and Hispanic people in Texas and around the country, including George Floyd’s murder last May.

On Monday, the House tentatively approved state Sen. Joan Huffman’s SB 23 on an 86-57 vote after about two hours of passionate speeches and debate between the bill’s sponsor, state Rep. Tom Oliverson, R-Cypress, and several House Democrats. When passed by the Senate, the bill applied to all Texas cities and counties, but it was changed in the House State Affairs Committee to only apply to the most populous counties. A House bill awaiting a hearing before the full Senate would financially punish large cities that cut police funding.

“Texans deserve to feel safe in their communities, and this bill guarantees that local voters have input in a critical decision,” Oliverson said on the House floor Monday.

Supporters have deemed both the Senate and House bills as essential to protect public safety while homicide rates continue to rise in cities throughout the state and country. The bill’s opponents have knocked the bill as political pandering that blocks necessary police reforms. The term “defund the police” has become increasingly politicized, though its intent can range from activists seeking complete abolition to localities shifting police duties, like operating crime labs, into civilian roles.

“This is tyranny, this is an overreach in government,” said state Rep. Jarvis Johnson, D-Houston, in a speech against the bill. “We have decided to take a couple of buzz words and catch phrases to make partisanship and to divide this state and this country.”

The bill still needs to pass once more in the House before it can be sent back to the Senate for it to either accept House changes or negotiate the differences behind closed doors.

The House’s measure on police funding, House Bill 1900, would financially penalize cities with more than 250,000 residents if the governor’s office judged that they cut their police budgets. The state would siphon some sales taxes for state use and ban the city from increasing property taxes or utility fees. Huffman, a Houston Republican, chairs the Senate Jurisprudence Committee which approved the House bill Thursday and sent it to the full chamber which could hear it before Wednesday. Earlier this month, House Democrats argued the 250,000 population cap made clear HB 1900 was only meant for the Republican-led state to control large, mostly liberal, cities.

“If we’re going to put these mandates on five counties, let’s put these expectations on every county,” she said. “If you truly believe that there is a viable role for the state of Texas to be doing this kind of intrusive management on how our local authorities are doing their job, then you should support this.”

State Rep. Gene Wu, D-Houston, suggested the cap may lead to lawsuits over the intent of the bill. Oliverson pushed back against the amendment, saying the problem was in large, urban counties. Johnson and state Rep. Jasmine Crockett, D-Dallas, pushed back that the real problem was police brutality.

Oliverson countered that, under this bill, the community could then vote to cut the police budget. But he later theorized that departments facing misconduct allegations should not face budget cuts, either.

“It may be that that’s a department that’s in need of better training,” he said.

The legislation is directly in response to the city of Austin, where Mike Ramos was killed by police a month before Floyd. After a summer of unrest, the City Council responded by cutting its police budget. Almost all of the decrease came from an accounting shift that still allows traditional police duties to remain funded, but potentially in different city departments. About 7%, or $31 million, was cut immediately and instead put toward other public services, like housing and mental health. Still, the decision brought immediate backlash from Republican state leaders, who have since rallied behind efforts to “back the blue” and stop efforts to “defund the police.”

Since Austin’s budget vote in August, the governor has strongly fought to maintain police funding while remaining largely silent on reforms to policing behavior or accountability. In February, Abbott made punishing cities that cut police funding an emergency issue for the 2021 Legislature.

Some standalone provisions from the bill had more success in both chambers, but the House’s police reform bills have since languished in the Senate, not having been given a hearing in Huffman’s committee as the Wednesday deadline for the chamber’s approval nears. The House bills would require Texas law enforcement agencies to implement more uniform and substantive disciplinary actions for officer misconduct, bar officers from arresting people for fine-only traffic offenses and require corroboration of undercover officer testimony in drug cases.

The Senate’s police reform bills, however, are more narrowly-targeted and police union-approved. On Sunday, the House finally passed the Senate bill to require police officers to provide first aid to injured people and call for emergency services. This week, the House is set to hear the Senate measures to largely ban police chokeholds and require police to intervene if a fellow officer is using excessive force, but it’s unclear if they’ll come up on the floor before a procedural deadline Wednesday.

Texas Legislature considering bill to make it harder to get public...