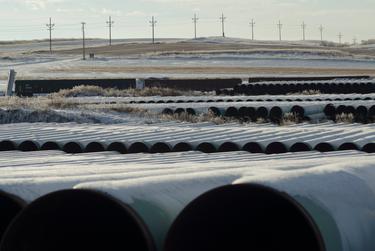 Twenty one states, led by Texas and Montana, filed a lawsuit Wednesday against the Biden Administration for revoking a permit for the long-disputed Keystone XL pipeline.

The complaint, filed in a Texas federal district court by Texas Attorney General Ken Paxton and Montana Attorney General Austin Knudsen, argues the president exceeded his authority when he canceled the pipeline’s permit after being sworn in on Jan 20. The decision should rest with Congress, according to the lawsuit.

The project was supposed to move Canadian crude to the U.S. — and on to Texas Gulf Coast refineries. But it has been a flashpoint in fights over economic development, fossil fuels, and environmentalism.

Biden said in an executive order revoking the permit that letting it remain was inconsistent with his administration’s “economic and climate imperatives.”

President Donald Trump granted a permit in 2019. The Obama administration denied one in 2015.

According to the complaint, the states expect cancellation of the pipeline would lead to a significant loss in tax revenue — that would have particularly benefited “poorer rural areas.” The project was expected to create high-paying union jobs in several states, the complaint says.