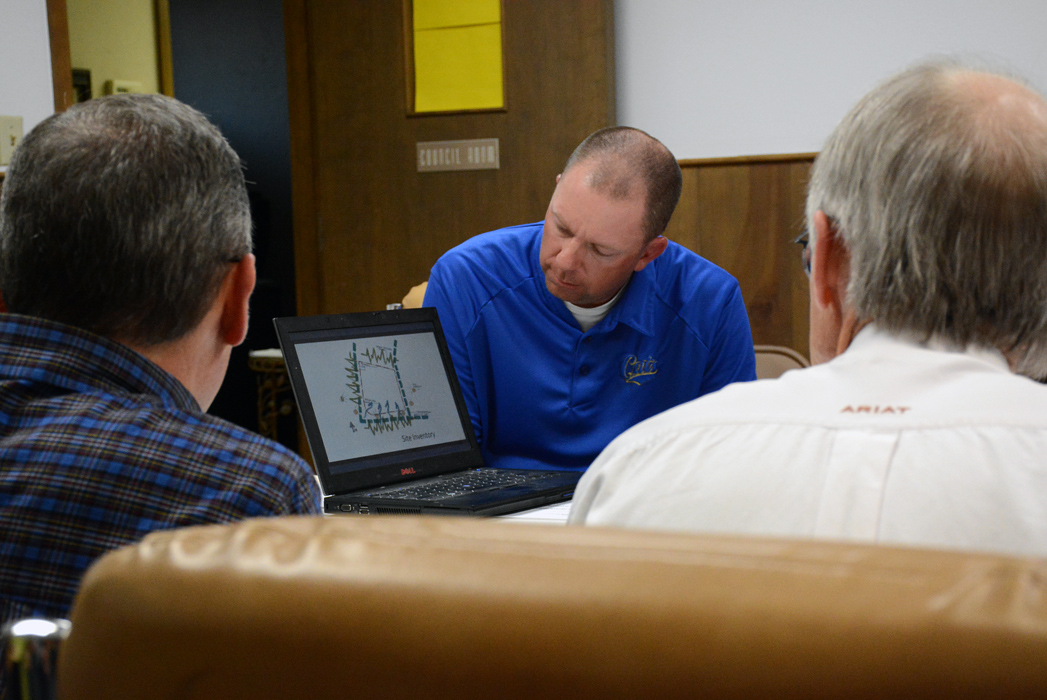 Above: Jonathan Zerby plays a video Leah Kimbrell developed that shows a rendering for the Greg Smith Memorial Park. Kimbrell graduated from Sunray High School and is majoring in landscape architecture at Texas Tech University.

The Greg Smith Memorial has a home. The Sunray City Council on Thursday approved using property near the intersection of highways 119 and 287 for a park that will honor the city’s long-time manager who passed Oct. 24, 2015.

Jonathan Zerby told the council Leah Kimbrell, one of Sunray’s graduates who is majoring in landscape architecture at Texas Tech University, developed a prototype for the memorial, along with input from fellow students. Zerby played a video Kimbrell put together that outlines the beginnings of what the Greg Smith Memorial Park could look like.

The memorial will be built at Sunray’s north entrance, and Kimbrell envisions an enclosed park that could be coordinated with the memorial at City Hall. A semi-circular arbor and other landscaping would continue Smith’s plans for Sunray’s beautification, including a “Welcome to Sunray” sign. Kimbrell said in the video some of her ideas for the park were inspired by her visit to Versailles.

“We want to create a sense of peace,” Kimbrell said.

Some of the park’s funding will come from the contributions people made after Smith’s death. Zerby said the fund has about $8,000 in it, and additional money could come from selling personalized bricks that could be placed at the park and placing names on benches.

“We might start small and add to the park as time goes by,” Zerby said. “This is the only idea we have so far.”

Zerby said the committee planning the memorial will check in with the Council to ensure they’re doing what the city would like.