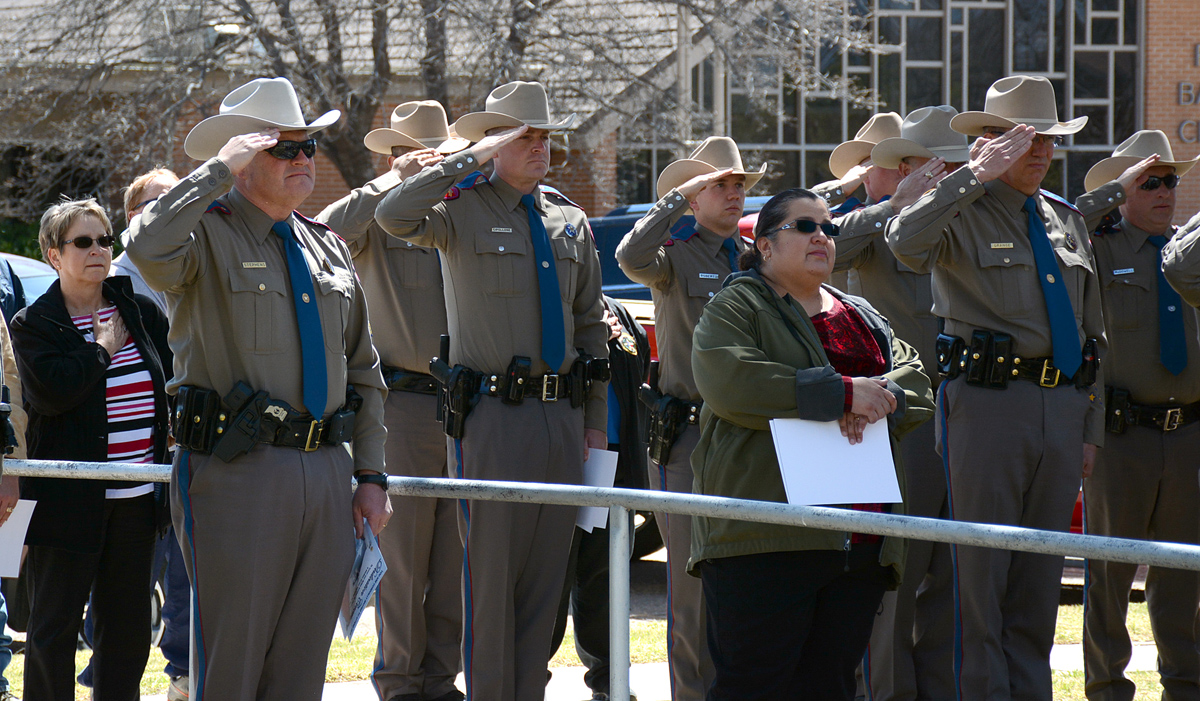 Part of the highway he patrolled 23 year-plus years ago, the highway where his life ended, will now bear his name. Political officials, local leaders and representatives from at least 17 law enforcement agencies gathered at the Sherman County Courthouse on Thursday to dedicate a portion of U.S. Highway 287 in the memory of DPS Trooper Bobby Steve Booth, who died in the line of duty in 1993.

The Texas Legislature created the Trooper Bobby Steve Booth Memorial Highway, which will stretch from north of Stratford to the Texas-Oklahoma border, and during the ceremony, a DPS honor guard unveiled the sign that will mark that highway.

On June 16, 1993, 28-year-old Booth responded to a citizen’s complaint call about a man on Highway 287 who was waving a gun and driving erratically, according to a Texas State Trooper Association newsletter. Booth caught up with Joseph H. Norton, and witnesses later reported they saw Booth struggling with a man, later identified as Norton. Booth’s body was found near the scene of the stop about 40 feet off the highway in a wheat field. He had been shot five or six times, the report in the newsletter said.

But he hasn’t been forgotten.

“When I called my mom to tell her about the dedication, she said, ‘They told me they would never forget Steve Booth,” Booth’s widow, Renee Booth Cavitt, said during the ceremony. “You have all redefined the phrase gone but not forgotten.’”

A few hundred people stood in the courthouse square and listened to dignitaries speak about Booth and his six years of service as a trooper. In addition to his comments at the dedication, DPS Director Steven McCraw said in a news release Booth “was a man of great courage, and his dedication to helping others will always be remembered.”

Cavitt said she’ll never forget that man of great courage and the day she said “evil came into our lives in a way we’ve never seen before.”

“But this dedication proves that God is good, and good triumphs over that evil,” Cavitt said. “I want to thank the Texas DPS. It’s the biggest family in Texas.”