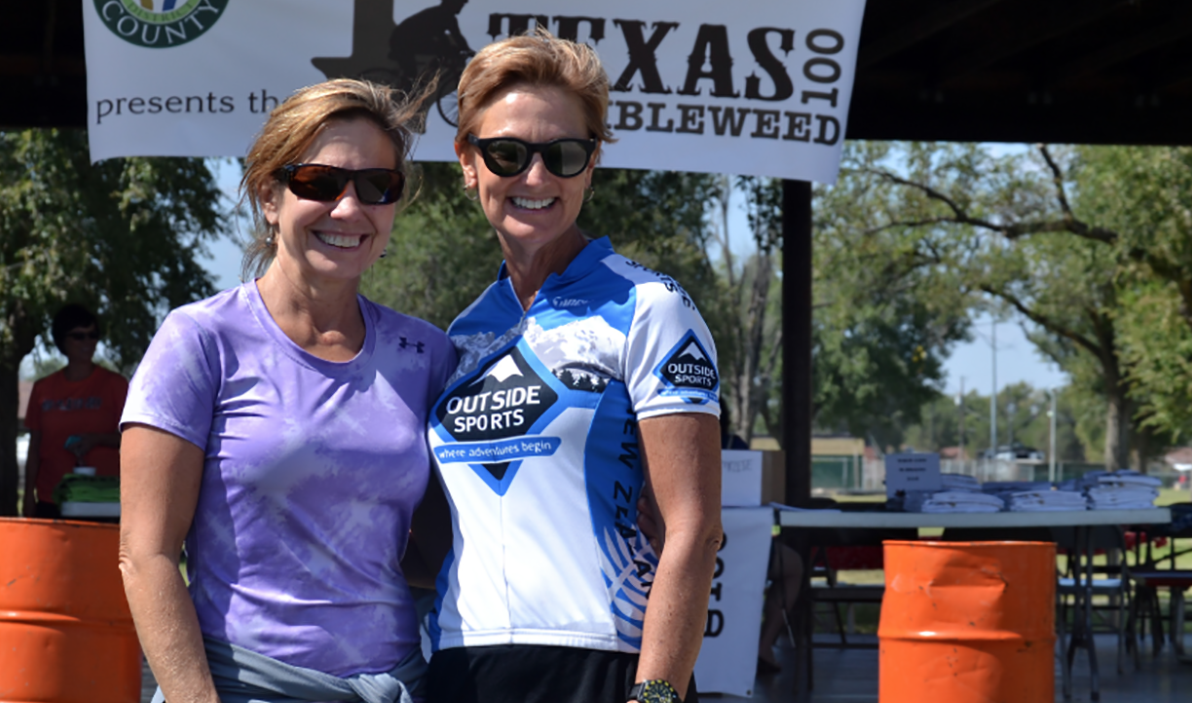 Above: Susan Riseling, right, came up with the idea of having a bike run in Dumas as a fundraiser for the YMCA. The Texas Tumbleweed 100 is centered at McDade Park, and Riesling and other event planners want to give the ride’s participants a free beer, but Dumas’ city manager said state law and city ordinance won’t allow it. YMCA CEO Brenda Elzner is pictured with Riesling in this photo from the 2015 Texas Tumbleweed 100.

The riders in an upcoming bike run will face challenges while maneuvering the terrain, but the event’s organizers also face what is turning out to be an uphill snag. They want to serve beer to the participants, but the city of Dumas’ ordinances and state laws will make that difficult to do. The Dumas City Commission on Monday discussed the legalities of allowing beer at McDade Park during the Texas Tumbleweed 100 in September, and after they said they’d put it on a future agenda, City Manager Arbie Taylor told them he didn’t see any way the city can approve serving beer at the event.

A city ordinance says, “It shall be unlawful for any person to possess or consume any alcoholic beverage in any public park of the city.” The city would have to amend that ordinance, but it’s just one of several legal walls the event’s planners would have to get around, Taylor said. State law allows prohibiting the sale of liquor within 1,000 feet of a public school, and since Demon Stadium and the baseball park fall within that proximity, it’s one more barrier that would stop serving beer at the bike run.

How the beer is served is another issue, Taylor said. The bike run’s organizers want to give each participant a coupon for a free beer, but Taylor told the commissioners the law states the free beer has to be extended to everyone, whether or not they’re riders.

“If it’s free, then it has to be free to everyone,” Taylor said. “That means anyone could go the event and get a free beer. If there are barriers to get to the alcohol, then a permit or a lease is required. It would require a special off-site permit.”

The bike run’s sponsors wouldn’t face the legal restrictions if they held the event at a private parking lot, but Taylor said it’s not likely to happen at McDade Park.

“We would have to craft an ordinance and be very specific to amend the current ordinance to allow those things to be permitted,” Taylor said. “An even if we loosened up our ordinance, the state will still say no.”

Regardless, some people want to know why other cities can host events where beer is served.

“People come to me and ask why can’t we set up something like that,” Commissioner Bob Brinkmann said. “Instead of looking at why something is impossible, I’d like to see how we can make it possible.”

Mayor Pat Sims said the Commission could look at other cities and see how they are hosting events where beer is served. The commissioners agreed to continue the discussion at a future meeting, either later this month or early August. No one from the Texas Tumbleweed 100 attended the meeting.