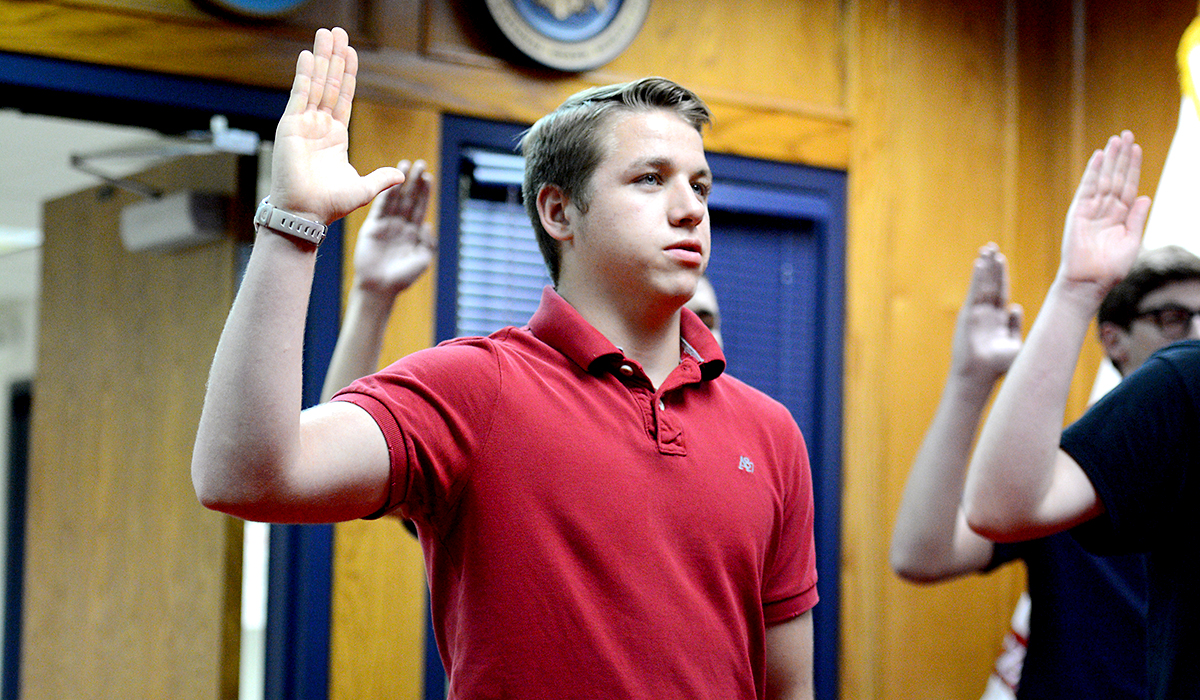 Above: Sunray High School Senior Corbin Melton is sworn into the U.S. Army on Thursday. He’ll leave for boot camp after graduation.

Corbin Melton understands Army life will be a tad different than the one he’s known in Dumas and Sunray, so he’s preparing for it. He recently told his mother he’s going to start eating exotic foods.

“What would that be?” Charlana, his mother, asked.

Corbin is a senior at Sunray High School, and he was sworn into the U.S. Army on Thursday, although he won’t leave for the nine weeks of boot camp until May 22, 2017. That’s three days after he graduates and five days after his 18th birthday. That means he’ll miss his senior trip.

“It’s kind of a bummer,” Corbin said, “but I’m anxious to get going and start my life in the Army.”

Corbin’s decision to join the military didn’t begin months or years ago; it was actually pretty recent. He was looking at websites about four weeks ago and saw the career choices the Army offers. He saw there were options for him to pursue a career that would take him outdoors, and that was a draw. He looked at the infantry, and it was a match.

“I like to be out in the action, so I don’t want to be sitting behind a desk,” Corbin said. “I felt that the Army offered me more choices than the other branches.”

After he made the decision and sent his contact information to a recruiter, Staff Sgt. Santos and Staff Sgt. Oberlin began what turned out to be thorough discussions of what he could expect from the Army and what it would expect of him.

“We talked for about three hours at the Dairy Queen,” Charlana said. “They answered all of our questions. We’re all for him joining the Army, and after talking to the recruiters, we don’t have any concerns.”

Corbin’s father, Chuck Melton, is a Dumas police officer, and he also believes the Army will give Corbin the professional skills and personal discipline that will get him through life.

“He has my complete support,” Chuck said. “As long as he’s doing something, I’m good with it.”

So during the next eight months, Corbin will be trying salads and other exotic foods and getting himself ready for his three years in the Army.

“I know the Army is going to make me a better person,” Corbin said. “I’ll get the training and education that will help me get good jobs when I get out, and I’ll get to see other places.”