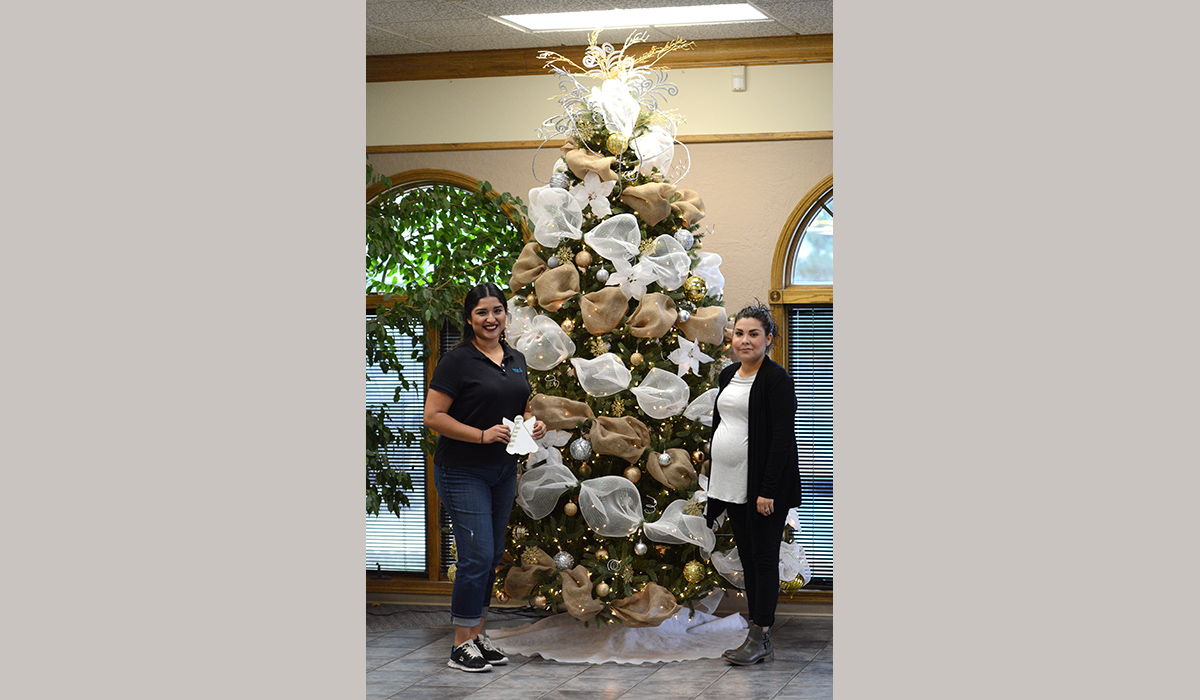 Above: Janet Garcia, left, and Adriana Vargas helped put up an Angel Tree at Shamrock Federal Credit Union, which will benefit the children under the guardianship of CASA 69.

To many people, especially children, a Christmas tree is a symbol of a season of giving. For too many children, though, a Christmas tree is a reminder that for them, the giving doesn’t reach them, a reminder of what they don’t have and perhaps have never had. But Shamrock Federal Credit Union hopes to change that for at least 42 of those children.

When you walk into Shamrock Federal, you’re greeted by a tree that soars almost to the ceiling. Among the decorations are angels, each representing a child who, unless someone steps in, will receive little or nothing at Christmas.

“The thought of that just tears at my heart,” said Janet Garcia, a loan officer at Shamrock Federal. “To know there are kids out there who have nothing throughout the year and then especially at Christmas is too heartbreaking. We have to do something to help.”

“If there was a place to serve Thanksgiving dinner, I’d do that, too,” Garcia said.

The catalyst that spurred Garcia to put up an Angel Tree occurred at a recent health fair when she was speaking with CASA 69 Executive Director Edye Cunningham. Garcia learned about the large number of children who will have an impoverished Christmas unless people don’t step in to help. She said she had no clue there are so many children in need.

The Angel Tree at Shamrock Federal will benefit children who the state has placed under CASA 69’s guardianship. Fifteen of them are local, while others are living nearby and up to 800 miles away.

“They’re either with relatives, in foster homes or in residential treatment centers,” Cunningham said. “The children are there through no fault of their own, and what Janet and Shamrock Federal are doing is especially meaningful because these children have had everything taken away from them. When they get something for Christmas, it will be something that will be theirs, something they want. It will make a tremendous difference for them.”

Each angel on the tree will have information that will make help shopping for the children easier. The child’s gender, as well as clothing sizes are listed, but you’re not limited by what’s listed on the angel.

“The kids need toys as well as clothing,” Garcia said. “We want them to have things that are practical, but everyone likes to get something that is just fun. Some gifts can warm the body, but there are also gifts that warm the heart.”