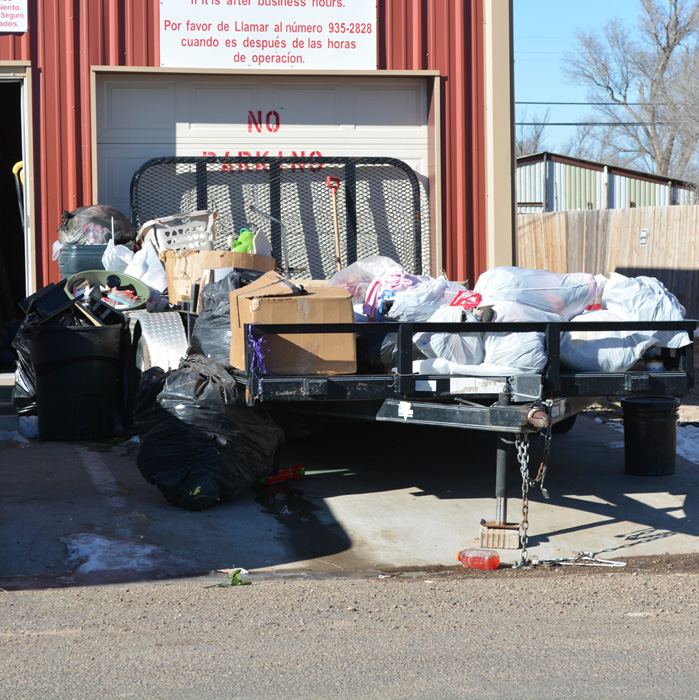 Above: A woman who lives next door to Safe Place says this trailer where people drop off donations is creating numerous problems for her and her family. Recently, she said, a man who was stealing items off the trailer threatened her if she called the police.

A woman who lives next door to Safe Place on Birge Avenue recently told Dumas police officers that a man who was stealing items off the thrift store’s donation trailer threatened her if she called police, confirmation, she says, that the conditions at Safe Place are not only unsightly, they pose a danger to her and her family.

Dove Poole told the Dumas City Commissioners on Dec. 21 people drop off donations, putting them on a trailer parked in front of the thrift store. At times, the bags of donated items, electronics and furniture spill over the trailer, and Poole said she has to pick up trash that blows into her yard almost every morning from Safe Place, but the threat was the last straw.

“A pickup pulled up in front of my daughter’s car right after Christmas, and two men were stealing stuff off the trailer,” Poole said Monday. “They saw my daughter standing at my front door, and one of them walked up and said, ‘If you call the cops, I’ll do something to your car or your house.’”

Poole told the commissioners the problem is ongoing, and city of Dumas Health/Code Enforcement Officer Holly La Fever said she’s talked to Safe Place officials several times over the last couple of years about the problem. City Manager Arbie Taylor said they clean it up, but then let the trailer’s contents get out of control again. Poole has spoken with Taylor several times, but she said she wants Safe Place to come up with a permanent solution.

“They can get a donation bin that will keep people from stealing from it,” she said. “It would keep stuff from blowing in my yard, and it would keep it from being rained on. People are over there at all times of the night, stealing off the trailer or putting stuff on it. There’s no reason for anyone to be over there at 2 a.m. Safe Place needs to secure the place so donations can be made only during business hours.”

“The problem with that is the city’s code requires them to measure from the center of the street to 40 feet back,” Duby said. “I want to fix the problem. We’ve looked into those enclosed bins, but they cost over $4,000.”

Duby said Safe Place will continue to work to find a solution that will comply with the city’s building codes.