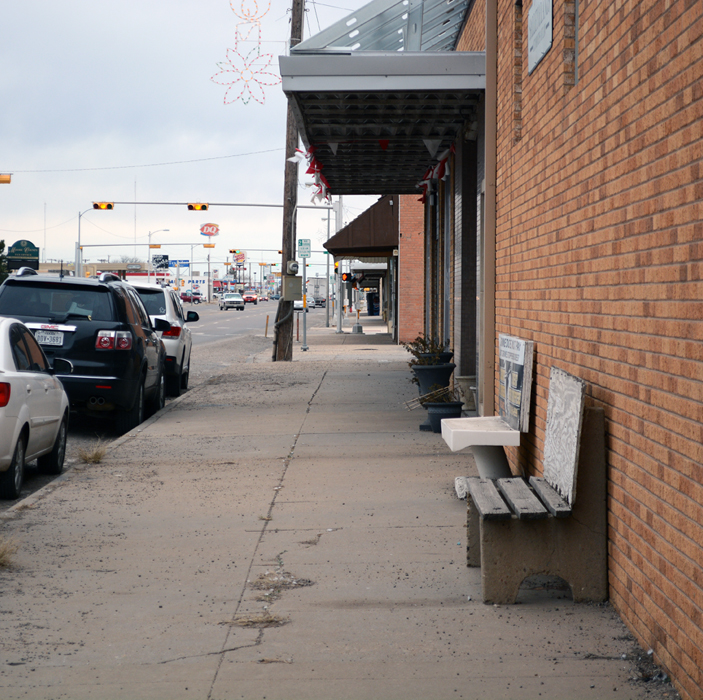 Above: If the Dumas City Commission and TxDOT decide to replace the asphalt on Dumas Avenue with concrete, the sidewalks’ widths could decrease. The city is planning to hold a public forum to give the public a chance to weigh in on the project.

The Dumas City Commission is again ready to schedule a public forum to discuss the possibility of covering Dumas Avenue with concrete. Mayor Pat Sims canceled a forum scheduled in September, saying the project’s plans were too ambiguous to present to the public, but on Monday, the commissioners discussed scheduling a forum in early 2016.

The commissioners haven’t publicly said how they stand on the concrete project, but some of the business owners on Dumas Avenue are against it. Several of them attended a Commission meeting in November and told the commissioners the construction would make it difficult, if not impossible, for customers to access their businesses. The project is expected take about two-and-a half years to complete.

City Manager Arbie Taylor told the commissioners on Monday he scheduled a meeting with Mayor Pat Sims, himself and TxDOT’s Amarillo District Engineer Ron Johnston on Jan. 7 “for an informative meeting” so the city would be better prepared to answer questions at a public forum. TxDOT will attend the forum, but the commissioners were divided on whether or not they should be there. Commissioner Bodnar said people have told him they don’t want TxDOT at the forum, but Commissioner Ben Maples said it would be better to have them attend so those people can hear the plans directly from TxDOT.

Dumas Avenue has been a TxDOT road since the 1930s, and if the city can prove the utilities were in place before the state took possession of the road, TxDOT would be responsible for moving the utilities from 1st Street to 14th Street. The concrete project would extend to the city’s southern city limits, and the cost of moving utilities from there to 14th Street would be the city’s responsibility. Taylor has previously told the commissioners TxDOT won’t concrete Dumas Avenue unless the utilities are moved because they don’t want to do it over the city’s infrastructure. The project also could include narrowing the sidewalks to increase the width for parking on Dumas Avenue.

Taylor said a date for that gathering will have to be set after asking TxDOT officials when they’re available. Other commissioners said they want to attend the Jan. 7 meeting with TxDOT, and if a quorum is created, the city will have to post an agenda and open the meeting to the public.