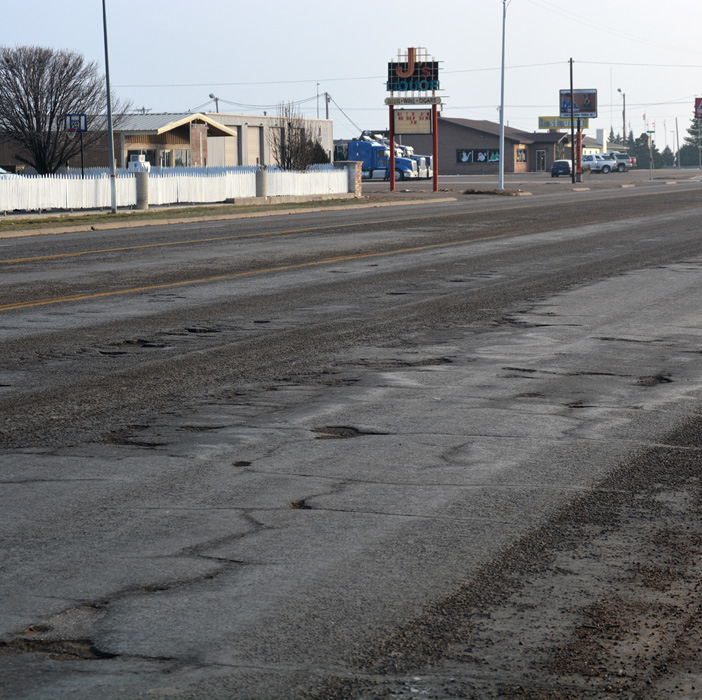 Above: The condition of Dumas Avenue is deteriorating as the number of potholes increases. The Dumas City Commission will hold a public forum on Jan. 25 to discuss plans to repair the busy street.

The potholes on Dumas Avenue will get a little wider and a little deeper by the time people will have a chance to ask what’s going to be done about them. The Dumas City Commission said Monday they will hold a public forum to discuss the busy and deteriorating street and whether TxDOT should cover it with concrete or repair the asphalt. The forum, planned for Jan. 25 at 6 p.m., will be held at the Moore County Community Building, and TxDOT officials will be there to answer questions about what could be a long-term construction project if concrete is picked as the option for Dumas Avenue.

Bodnar said people who have spoken to him about the project say they want to see a map that shows TxDOT’s plans. Will Dumas Avenue be widened? If so, how much of the sidewalks will be lost? Will the store’s awnings be affected? City Manager Arbie Taylor said they won’t. How will the project affect the businesses on Dumas Avenue? And then there’s the looming question of who will shoulder the cost of moving the utilities under Dumas Avenue. Taylor said in previous meetings TxDOT will move the utilities if the city can show they were there when TxDOT took possession of the street in the 1930s. However, Taylor said on Monday TxDOT “will cover the relocation of the utilities,” and “we’re going to see Dumas bearing a minimal amount of the cost of this project.”

But while the discussion of what to do with Dumas Avenue is brewing up myriad questions, one topic that has has caused much gnashing of teeth won’t be discussed on Jan. 25: the reliever route. Taylor said it won’t be discussed, but Bodnar disagreed.

“I don’t see how you can have one conversation without the other coming up,” Bodnar said.

“This has nothing to do with the bypass,” Taylor replied.

The commissioners have discussed breaking the concrete project into blocks to minimize disruption for the businesses, and Taylor said in previous commission meetings that if the city decides to go forward with concrete, TxDOT would be looking at a 2017 or 2018 start date, and it would take the city about a year to plan its part of the project. The affected stretch of Dumas Avenue would extend from 1st Street to the southern city limits.

While discussing plans for the forum, the commissioners confirmed a meeting some of them will attend with TxDOT officials in Amarillo on Thursday (Jan. 7). As of Wednesday morning, Taylor said Mayor Pat Sims and commissioners Justin Willis and Steve Bodnar confirmed they will meet with TxDOT’s Amarillo District engineer at 3 p.m. The details that need to be hammered out before a decision is made about Dumas Avenue are as numerous as the potholes in it, and the commissioners hope to have some of them lined out before the Jan. 25 forum.

The City Commission will have a quorum at the meeting, and an agenda was posted at City Hall. The meeting will be held at 5715 Canyon Drive in Amarillo, and the public can attend. The Journal will publish a report Thursday that examines the concrete project in detail. The Journal also will follow up on a story published in May 2015, in which TxDOT spokesman Paul Braun said they were waiting for better weather to repair the potholes on Dumas Avenue.

“You can’t put hot asphalt into a wet hole, so we have to repair the potholes with a cold patch, which is a temporary fix,” Braun said in May. “When the weather dries up, we’ll go back in there, dig up the cold patches and make more permanent, lasting repairs.”

To read a previous Journal reports on the concrete project, click on this link and this link.