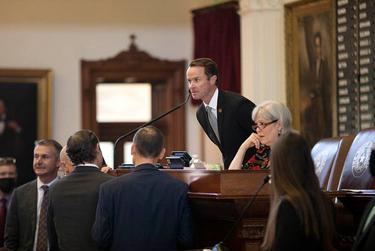 House Speaker Dade Phalen on the House Floor on May 5, 2021.

With time dwindling on the legislative session, the Texas House is breaking until Sunday, in an attempt to send the Senate a clear message: Pass our priority bills or see your own legislation die slowly in our chamber.

House lawmakers expressed frustration on Thursday that some of their priority legislation had not moved in the upper chamber, including a package of health care and criminal justice reform bills pushed by House Speaker Dade Phelan.

“If the [Texas] Senate wants to kill or sit on important bills sent over by the House, they can expect the same in return. Starting today,” Rep. Jeff Leach, R-Plano, tweeted Thursday morning. “As a wise House colleague once said, ‘The Senate can respect us. Or expect us.’”

The House is approaching tight deadlines, starting this Sunday, for moving forward Senate bills. But in a surprise move, the House recessed on Thursday despite having already set calendars for both Friday and Saturday. Bills on those calendars will be picked up when the House reconvenes Sunday afternoon, but by recessing early with less than two weeks left in the session, House lawmakers have placed many of the Senate’s remaining bills in danger of not passing.

The deadline to set Senate bills on the House daily calendar is Sunday by 10 p.m. All Senate bills, except those on the local and consent calendar, must receive initial approval from the House by the end of Tuesday.

Several of the Senate’s priority bills still need the House’s approval, including that chamber’s response to massive power outages in the state this winter, and bills that would restrict transgender student athletes to playing on school sports teams based on their biological sex instead of their gender identity and require any professional sports team with contracts with the state government to play the national anthem before the start of a game.

Leach is the author of House Bill 1340, which was included in Phelan’s criminal justice reform package and easily passed the House. The bill, which would restrict when people who don’t kill anyone can get the death penalty because of their involvement in a crime, did not get a hearing in the Senate Criminal Jurisprudence Committee’s last scheduled meeting on Thursday, essentially tanking the legislation.

On the House floor Thursday, Leach also mentioned House Bill 275 by Rep. Joe Moody, D-El Paso, which would revise the state’s “junk science” law to allow courts to overturn a sentence. It failed to pass in the Senate Criminal Justice Committee on Tuesday. It had passed the House 144-1.

Moody, who serves as speaker pro tem and is a Phelan ally, and Leach both made the motion to recess until Sunday. The two are co-chairs of the House Criminal Justice Reform Caucus.

Phelan declined to comment. Lt. Gov. Dan Patrick, who presides over the Senate, did not immediately respond to a request for comment.

The Senate has also gutted House Bill 20, the chamber’s major bill on bail practices, and replaced it with the exact language from the Senate’s significantly different bail proposal that stalled in the House. That bill is now awaiting a full hearing in the Senate and if passed in its current version, would require negotiations between the two chambers to reconcile their differences.

Sen. Joan Huffman, R-Houston, who leads the Senate Criminal Jurisprudence Committee is the bill’s author in that chamber. On Thursday, Leach postponed the House hearing of Huffman’s Senate Bill 766 until Sunday.

In a statement, Huffman said the Senate is working hard to pass House bills and her committee would meet again after the chamber adjourns Thursday.

“The Senate continues to work to pass legislation that implements good public policy, has the votes to pass the Senate, and has the support of leadership,” she said. “The Senate Committee on Jurisprudence met this morning and will reconvene after session to hear and pass many House bills. The fact is – we are working hard to pass good legislation for our state, and that includes House bills. While Sine Die seems very close, we have almost a week to continue to pass House bills, and I can assure you that we will.”

The House also effectively killed Senate Bill 343 by Sen. Lois Kolkhorst, R-Brenham, who leads that chamber’s Health and Human Services Committee. On Thursday, Kolkhorst unveiled changes to one of the House’s priority health care bills that would let mothers on Medicaid keep their health coverage for a year after giving birth.

Originally, House Bill 133 by Rep. Toni Rose, D-Dallas, would extend coverage from the current two months to a year, which follows a top recommendation of the state’s maternal mortality and morbidity committee. But Kolkhorst’s amendments cut that time to six months.

The modified bill also adds provisions from Senate Bill 1149, which overwhelmingly passed the Senate but was not heard by the full House. That bill aims to move Medicaid case management for children and pregnant women to a managed care program. A state program called Healthy Texas Women would also be provided through managed care organizations, under the bill.

State Rep. Senfronia Thompson, the Houston Democrat who first questioned postponing consideration of Senate bills from the House floor on Thursday, is the lead author of the Texas George Floyd Act.

Though the sweeping, omnibus House Bill 88 never moved out of a House Committee, the two chambers have each passed three separate provisions from it. But as the Senate bills — which are more narrowly focused with police union support — have moved through the House, the House measures were not heard in the Senate’s Jurisprudence Committee, which held its last scheduled meeting Thursday.

The House’s move to recess until Sunday now places a lot of power over Senate bills in the hands of Calendars Committee Chairman Dustin Burrows, R-Lubbock. Burrows and the 11-member committee now decide what bills will be placed on the House calendar for the few remaining days in session when Senate Bills can receive approval from the House.

That committee includes Moody and Rose, whose priority legislation has been killed or significantly altered in the Senate.