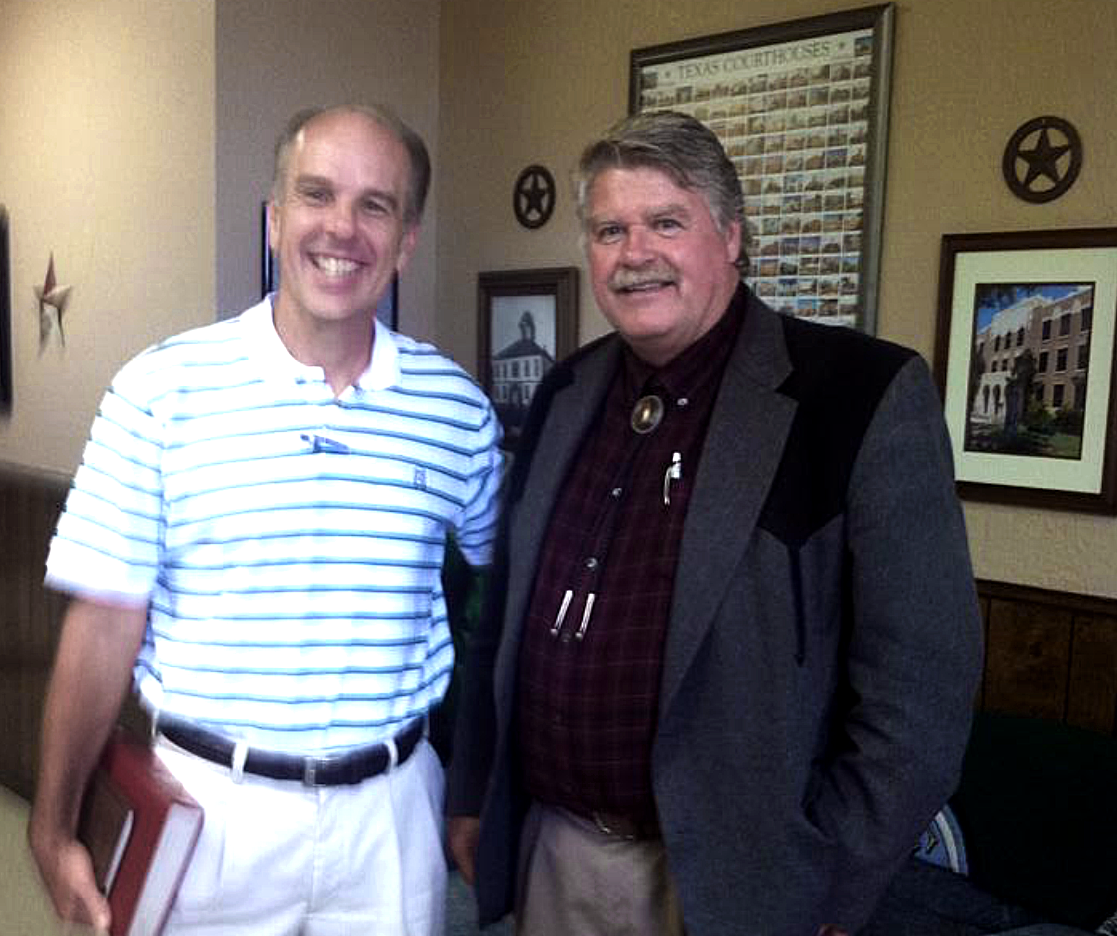 Above: The Rev. Johnny Teague, left, will hold a prayer rally at the Moore County Courthouse on June 13 before the start of the Dogie Days parade. Teague pastors a Houston church, and they’re committed to holding prayer rallies at each of Texas’ 254 county seats. Moore County Judge Rowdy Rhoades, right, is one of the 14 county judges in the Panhandle who are supporting Teague’s efforts. (Courtesy Photo)

Some people sing about waltzing across Texas, but a Houston pastor is making plans to pray across the Lone Star State.

The Rev. Johnny Teague, pastor of the 700-member Church at the Cross in Houston, will kick off his church’s plans to hold a prayer rally at each of Texas’ 254 county courthouses in a few weeks. They’ll begin June 6 in Clarendon, the county seat of Donley County, and then move to Hartley County the same day. Teague will then be in Dumas on June 13, holding a prayer rally at the Moore County Courthouse just before the start of the Dogie Days Parade.

“We plan to start at 9 a.m.,” Teague said. “We’ll have a soloist from the community open with a patriotic song, and then the Boy Scouts will lead us in the Pledge of Allegiance. I will do a short devotional, and we’ll follow with a silent prayer and then open it up to a public prayer where anyone who is led to pray out loud can do so.”

Teague said he has confirmed dates with 14 county judges in the Panhandle, the area of Texas where he decided to begin “Prayers Across Texas.”

“It’s going to take us about two-and-a-half years to cover all of Texas,” Teague said, “but our church decided we have to pray for a great awakening. We’re praying for our leaders, our nation and for peace in our country. This is an opportunity for citizens in every Texas county to come together, forgetting all divisions and call upon God, the author and creator, to step in, intervene and set things right. We pray that He brings a great awakening to this nation and revival to our churches. America is in a desperate situation, one that is far beyond anything man can solve.”

Teague contacted Moore County Judge Rowdy Rhoades several weeks ago through email and then met with him two weeks ago to discuss holding a prayer rally in Moore County.

“What incredible people Judge Rhoades and Carolyn are,” Teague said, referring to Carolyn Moore, Rhoades’ assistant. “Moore County has become my adopted hometown. I can’t believe the open arms and kindness shown to me.”

Rhoades said that after Teague approached him about holding a prayer rally in Moore County, he suggested it be held during Dogie Days.

“The timing is perfect,” Rhoades said. “Dogie Days represents what our nation is about — family, community — and I think it’s appropriate to take some time to thank God for blessing us with so much and to ask for guidance as we maneuver through some difficult times.”

Teague is hoping area churches and community members will support the prayer rally. Anyone interested in helping can contact him at johnnyteague@sbcglobal.net.

“Getting this done, covering the whole state of Texas, is a logistical impossibility, but we’re going to give it our best shot,” he said.