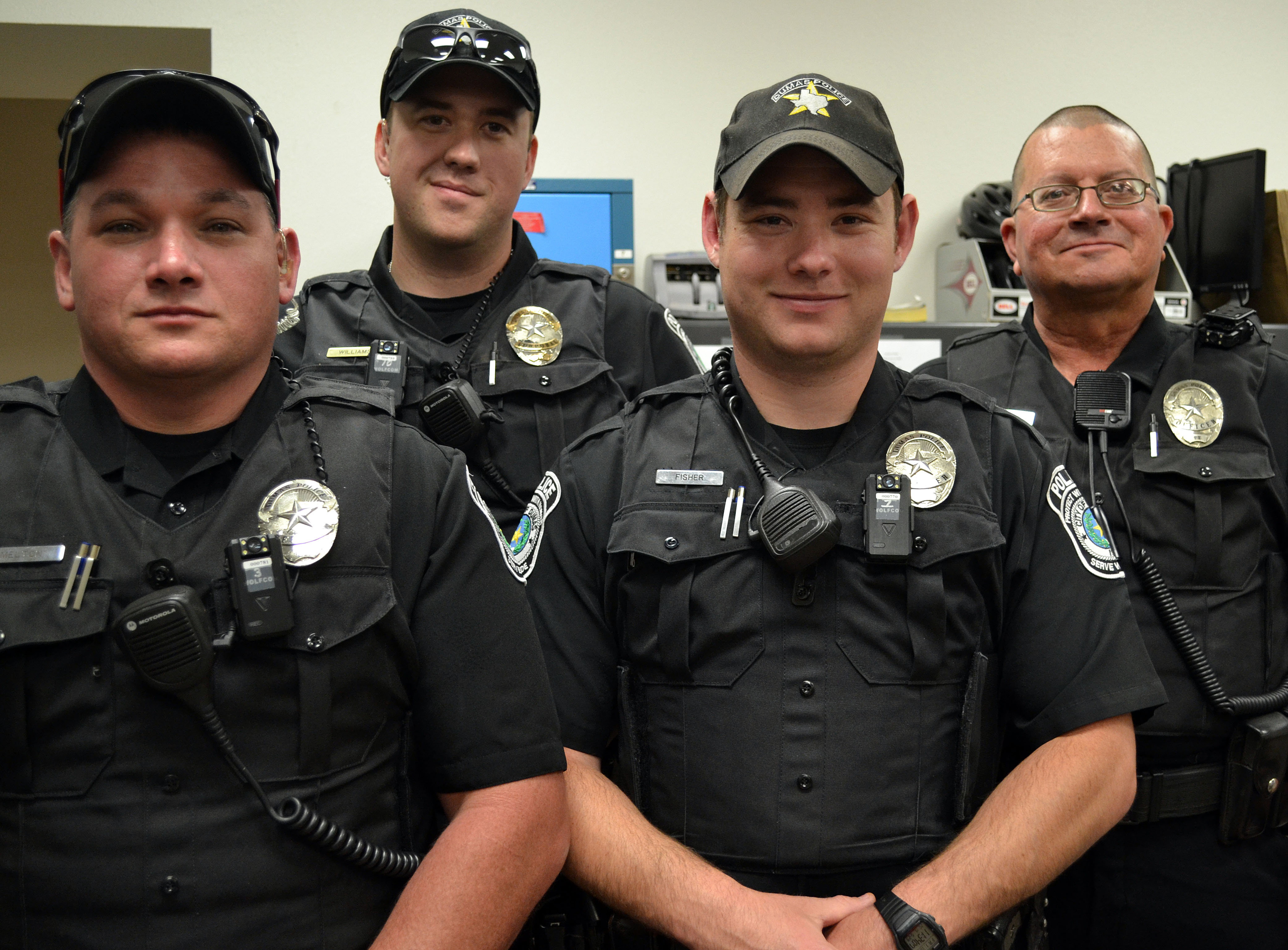 Above: Dumas Police Chief Jim Nelson says his department is committed to treating everyone with dignity, which greatly diminishes the chances of a traffic stop escalating to a physical level. From left, DPD Officers Charles Melton, Cpl. Clayton Williams, John Fisher and Allen Garland are part of the 26-member department. (File Photo)

“And don’t get confrontational with the officer,” Nelson added. “The officer will identify himself or herself, tell you why you were stopped and ask for your license and insurance. It’s not the time to argue with the officer.”

Nelson said cooperating during a traffic stop greatly reduces the chances of the encounter escalating into a verbal or physical confrontation, and given the highly publicized recent confrontations with police that ended in deaths, Nelson and his officers are committed to that not happening in Dumas.

“The absolute last thing I want to do is to go to someone’s house, and tell them their loved one isn’t coming home,” Nelson said.

Police Cpl. Clayton Williams said he knows people get nervous when an officer stops them, but it’s important not to do anything until the officer requests it. It’s understandable a traffic stop is upsetting, he said, even for him.

“I’ve been pulled over, and even I get a little nervous,” Williams said. “The officer making the stop knows the person isn’t going to be in the greatest mood when he or she is stopped, but it’s so important to stay calm and cooperate with the officer.”

Some of videos released after several recent deadly encounters with police officers in other cities show drivers becoming confrontational with the officer and not cooperating. The incident escalates to the point where the officer uses deadly force, and the nation reels in horror at another police shooting. Nelson said he can’t comment on how other departments train their officers or the actions those officers took that lead to the use of deadly force, but his department is trained not to engage in behavior that will complicate the encounter.

“All of the officers in my department have completed training in how to calm people down,” Nelson said. “We’re always going through training that helps us to do our jobs better.”

Nelson and Williams said it’s important to remain calm as soon as you see the flashing lights, indicating you need to pull over. They said you should keep your hands on the steering wheel and avoid the urge to start reaching for documents you anticipate the officer might ask for.

“It’s alarming for us when we see someone start reaching in the glove box or under the seat because we don’t know what they’re reaching for,” Williams said. “Don’t reach for anything until the officer asks you for something.”

Even then, use your head, he advises. Tell the officer you’re going to reach into the glove box for your insurance form. If you have a concealed handgun license, give that to the officer when you give him or her your driver’s license. The officers, Williams said, use caution for everyone’s protection.

“We want to protect the people we stop as well as ourselves,” he said.

The officers’ caution is warranted.  The FBI reported 51 police officers were killed in the line of duty in 2014, up almost 89 percent from the 27 officers killed in 2013. On May 9, 2015, two officers in Hattiesburg, Mississippi, — Liquori Tate, 24, and Benjamin Deen, 34 — were killed in a fusillade of gunfire during a routine traffic stop. On May 2, 2015, New York police officer Brian Moore was shot and killed when a man with a gun opened fire on Moore’s police car.

“Officers must use caution each time they make a traffic stop,” Nelson said. “We don’t want it to end badly for anyone.”

“We just want you to sit there until we tell you what to do,” Ray said. “We’re not going to get you hurt or us hurt. Keep both hands on the steering wheel, and don’t reach for anything until you’re asked to retrieve it such as your driver’s license or insurance card.”

Critics of police say there have been too many shootings, and The Washington Post reported in May that 385 people had been shot and killed by police nationwide during the first five months of 2015. How many were avoidable?

“Again, I can’t comment on what happens in other cities or with other departments,” Nelson said. “But I have tremendous confidence in my officers that they will conduct themselves professionally and treat every person with dignity and respect.”

The huge drop in citizen complaints against the Dumas Police Department are an indication of the respect the officers show to the citizens. The Moore County Journal reported in May the complaints have dropped 84 percent in the last two years, and Nelson said the officers often use their own money to buy food for children when they respond to calls and extend other courtesies, acts that show they care for the community they serve.

“We build relationships with the people we serve,” Nelson said.

Ray said the same commitment to treat people with respect is extended on the highways, but it takes courtesy on both sides to keep a stop from getting out of hand.

“Our troopers are trained to let people vent,” he said. “We know they might be unhappy about the stop, and we act appropriately. It has happened that a driver is already screaming before the trooper even approaches the car. Even if you don’t think you deserve a ticket, we have a great judicial system where you can address that. We just ask that you cooperate with the trooper at that time.”

“Again, cooperate,” Ray said. “We want to get you back on the road as soon as possible.”

Nelson said if you believe an officer has acted unprofessionally, you can file a complaint at the police department. All of the officers have body cameras, and they’ll be reviewed as part of the process to investigate and resolve the complaint.

“We’re here to help people,” Nelson said. “No one wants anyone to get hurt during a traffic stop or any other time an officer is involved. My officers will treat everyone with dignity, and if it should happen that someone thinks they weren’t treated properly, we’re here to address it.”

Ray also said anyone can file a complaint at the local DPS office if he or she disagrees with a trooper’s actions.

“That’s where you want to take care of your complaint,”Ray said. “Not on the side of the road.”

For more information about what your rights are when you’re stopped by an officer, click on this link.