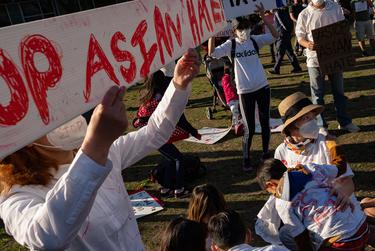 Mourners gathered at vigils in Discovery Green in Houston and Grassy Knoll in Dallas to honor and remember the eight victims — including six women of Asian descent — who were killed at three spas in the Atlanta area.

The vigil and rallies also come as Stop AAPI Hate reported 3,795 incidents of racism against Asian Americans and Pacific Islanders across the United States from March 19, 2020 to Feb. 28, 2021, leaving many Asian Texans feeling unsafe in their communities following the Atlanta shooting on March 16, 2021.

Photographers for The Texas Tribune were at these Houston and Dallas vigils this weekend, and here’s what they saw.

Left: People lit candles at Discovery Green in Houston during a vigil against racist attacks against the Asian community. Last: A person holds a candle skyward during the Houston rally.

First: People gathered at the Grassy Knoll in Dallas to stand in solidarity with the Asian community and to honor the victims of the recent shooting in Atlanta. Last: Anshu Shrestha and Jospeh Matawaran sat near the vigil held at the Grassy Knoll in Dallas. The group gathered to denounce racism againt the Asian community and the recent shootings in Atlanta.