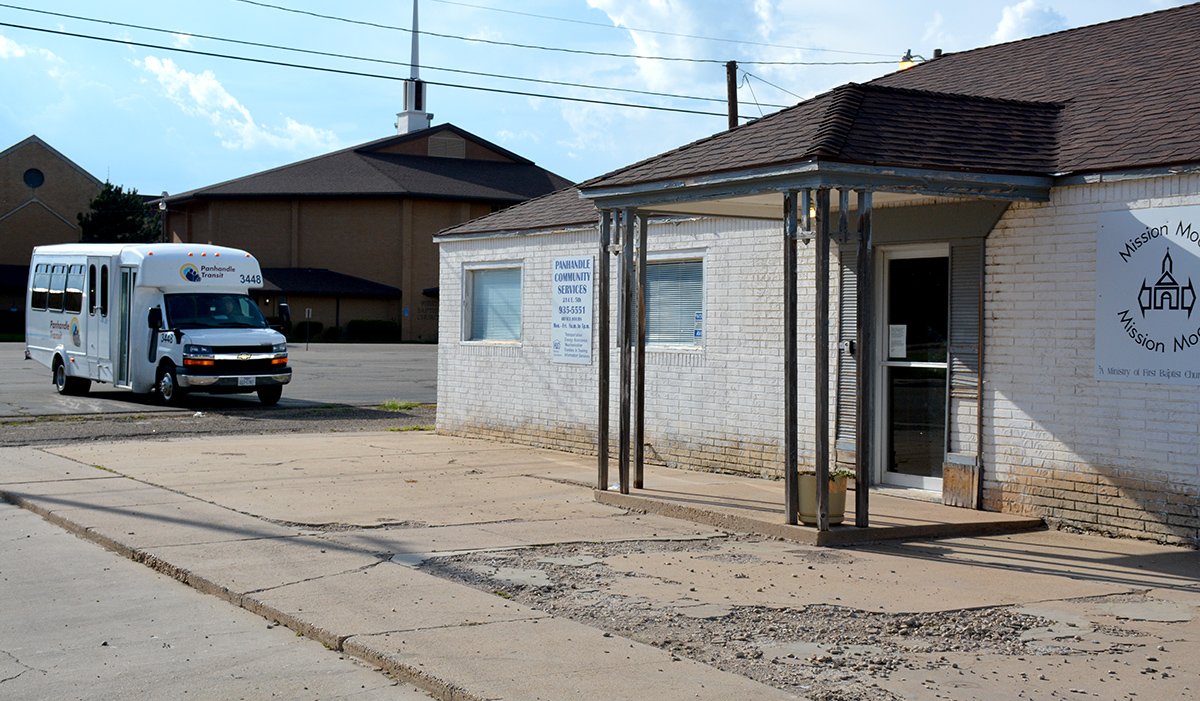 Above: Panhandle Community Services occupies a building owned by First Baptist Church. They and Care Net Pregnancy Resource Center, who has to move by February, are thinking about finding a building that would house both of them.

Two nonprofit agencies crossed paths while searching for new home, and they’re now considering the possibility of moving in together — if they can find a building.

Care Net Pregnancy Center will have to be out of their building at 201 S. Bliss by February 2017 because it will be torn down to accommodate the hospital’s expansion, and Panhandle Community Services is looking at moving out of the building they’ve occupied at 214 E. 5th Street. So the two agencies thought, why not partner?

“We’re hoping to find a building that would be big enough to accommodate all the nonprofits,” said PCS Executive Director Magi York. “People who need our services have trouble traveling from one agency to another, so it would help them if we were all in the same building.”

Both agencies, though, are faced with limited financial resources. Care Net Executive Director Monica Sullivan said she applied for a grant that would have covered the cost of constructing a building if they have the land to put it on. She looked at the property behind PCS and contacted First Baptist Church, the owner. Sullivan said the church is asking $140,000 for the lot, an amount out of Care Net’s budget.

“We would entertain a counteroffer,” First Baptist’s pastor, the Rev. Jerry Howe said. “We quoted a figure well below the appraised value for the building and all of the land, We believe in Care Net’s mission, and we want to do all we can to help them continue to provide their services to the community.”

The problem is Care Net lost their place in the grant process since they hadn’t secured land. First Baptist also owns the building PCS is in, but it’s an older structure that needs a good deal of renovation, according to PCS Executive Director Magi York.

“The other problem is that our auditor’s said we must have a lease, which we don’t have with the church,” York said. “They let us use the building rent free, and we’re responsible for the utilities and maintenance. We recently put in about $14,000 for some updates, but we don’t want to invest anything more without a lease.”

York said she emailed Howe to ask if the church would agree to a lease. After the exchange of a couple of emails, York said the church told her they’re going to sell the building and property.

The church hasn’t charged PCS for rent since 2001, and while they do want to sell the property, they’re not kicking PCS out. PCS is paying month-to-month.

“We haven’t had a counteroffer from PCS,” Howe said. “Just as in Care Net’s case, we want to continue our support of their services to the community. We want to sell the property, but we’re not pushing it. If PCS needs some kind of written agreement that would satisfy their auditor, we would be happy to do that.”

The Food Pantry also is located in the PCS building, so they’d have to move if PCS leaves. First Baptist doesn’t charge them rent, either, and they also pay their utilities and give them $100 a month.

Sullivan and York say this would be a good time for all the nonprofits to consider moving into one location. Moore County Judge Rowdy Rhoades, who is active in PCS, is helping them locate property. He had in mind a row of units on Bliss, but a call to the owner revealed another monetary obstacle; she’s asking $150,000 for the property, and it needs major repairs.

“We have to keep looking,” Sullivan said. “Maybe someone who understands the services we offer will help.”

Care Net provides guidance for abortion alternatives to men and women through Christ-centered support. They offer classes, groups, clothing, education and other resources. PCS assists with HUD, accessing health care, transportation, utility assistance, weatherization of homes as well as helping with another needs.

“These organizations are vital for our community,” Rhoades said. “Sometimes, people forget what it was like to come up from a difficult situation, so we need these services to help people who are still coming up. It would be nice if someone who has property could let Care Net and PCS have it at a reasonable price. We’re hoping someone will come forward.”