Home NEWS More than 1 million people in Texas filed for unemployment relief in... 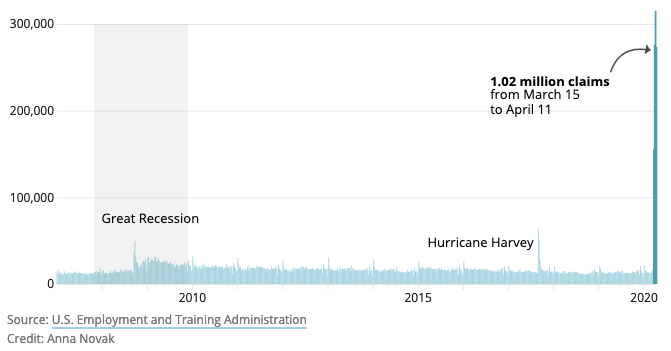 For the first time since Gov. Greg Abbott declared the new coronavirus a public health disaster, the number of Texans who filed for unemployment relief last week declined from the previous week, but only slightly.

Yet more than 1 million Texans have applied for unemployment insurance since mid-March, including 273,567 just last week, and countless more people are still struggling to file claims as they wait to feel the impact after the Texas Workforce Commission expanded its staff, added call centers and increased its number of servers.

“I know they said they were adding people to the call center and adding server space,” said Daniel Vasquez, a Tyler bartender who lost his job when Abbott ordered restaurants and bars to close to in-person dining. “That’s great to hear, but that was two weeks ago. I still can’t get through the website or the phone.”

Bars, restaurants and retail stores statewide have reduced operations or closed completely under the orders of officials trying to stop the spread of COVID-19, the disease caused by the novel coronavirus. As social distancing roils the economy, companies large and small have reduced employees’ hours, furloughed staffers or laid off workers.

The economic crisis continues to play out across the nation, as more than 5.2 million Americans applied for unemployment insurance last week.

It’s unclear how long it will be before Texas’ economy reopens. Abbott is working on a plan for that and is expected to unveil some details this week. On Monday, he said that it would be a “slow process.”

The Texas Workforce Commission for weeks has struggled to meet the demand from the tsunami of Texans suddenly out of work or with slashed hours. Since the week ending March 21, more than 1 million Texans have applied for unemployment relief. But analysts said that number is likely much higher, as more than 85% of callers trying to apply for unemployment aid are receiving busy signals.

But the small number of callers who are able to file claims via phone is trending upward. On Tuesday, 3,800 people successfully filed claims via phone, compared with 2,700 on April 7.

“Week to week, it looks like the number of calls we’re receiving are starting to go down,” Gamez said.

The commission is adding four external call centers, for a total of eight call centers, to field the influx of calls, Gamez said. Two of the additional call centers will be fully operational Monday, he added, and they’re taking some calls before they’re fully up and running.

Call centers are open from 7 a.m. to 7 p.m. every day. The commission has recommended staggered times for people to call based on area code to try to reduce the astronomical volume of calls.

About 1,000 new staff members are working to handle the wave of people struggling to file — workers from other departments at the Texas Workforce Commission, 115 emergency hires, and 245 volunteer staff from the Texas House and Senate. Volunteers from the Senate started working Tuesday, and House volunteers begin working Thursday, Gamez said. The workforce commission is planning to hire 60 additional people.

Gamez said the commission has over 1,500 people working in unemployment insurance, about a third of whom are answering calls. The Texas Workforce Commission has also quadrupled the number of servers it has from five to 20.

On Monday, Vasquez, the Tyler bartender, called the commission 127 times. Three of those times, he got through to answer a series of prompts.

When he responded to the prompts, the phone line disconnected, either immediately or after playing a recorded message directing callers to file online due to high call volume.

A common issue reported to the Texas Workforce Commission is that people are having trouble logging in with their passwords, Gamez said. In reviewing those calls, about one-third of people with password issues have been able to log in after trying again. Gamez said he encourages people with password problems to double-check that they are entering in their passwords correctly and try again.

If people are directed to call in, it’s because of a discrepancy in information that the commission needs to clarify, Gamez said. People won’t be penalized for missing deadlines for when they’re supposed to call, he added, and claims can be backdated as far as March 8.

The commission has also completed programming to allow independent contractors and self-employed workers to file for unemployment insurance online. People have already started receiving the additional $600 a week from the federal coronavirus stimulus package and will continue to see that added to their payments, Gamez said.

“I understand they’re having a hard time getting through,” Gamez said. “They will get help. It’ll just take time.”

Contacting the agency to file a claim is just the first step, though. Texans who have their claims approved then have to reach out again to request payment.

Gamez said the commission paid out $183 million to 137,000 Texans on Monday — the largest single-day benefit distribution. Those who file claims need to continue requesting payment every two weeks, even if they haven’t received payment yet. And they’re given specific days to make those payment requests.

[Have you had your bank account frozen by a debt collection agency during the coronavirus pandemic? Journalists at The Texas Tribune and ProPublica want to talk. Shoot us a note at community@texastribune.org, call us at (512) 650-8519 or fill out the form at the bottom of this page.]

People who have been able to successfully file their claims consider themselves “the lucky ones.” After not getting through for about two weeks — despite hundreds of calls — Mel Martell finally reached a representative on the phone Saturday.

“It was almost surreal,” said Martell, a self-employed hairdresser in Austin. “I talked to a human — an actual human answered the phone. I can’t even tell how many times I called, making myself crazy.”

Martell credits increased staffing for her success in getting through on the phone line. After she got off the phone, two other people from Martell’s salon were also able to talk with a live representative the same day.

But Martell is still waiting for money to reach her bank account. The representative told Martell she’d have to wait until Thursday before requesting her first payment. And she still doesn’t have a clear answer on whether she’ll have success when she tries to request payments or how much she qualifies for in benefits.

“Just the uncertainty of it all has been the most challenging part,” she said. “I’m watching things just pile up, having to cancel appointments and knowing I have to reschedule appointments. It’s hard to deal with.”

Mitchell Ferman contributed to this report.