Home NEWS Moore County has paid $47.2 million for a fishing hole in Hansford... 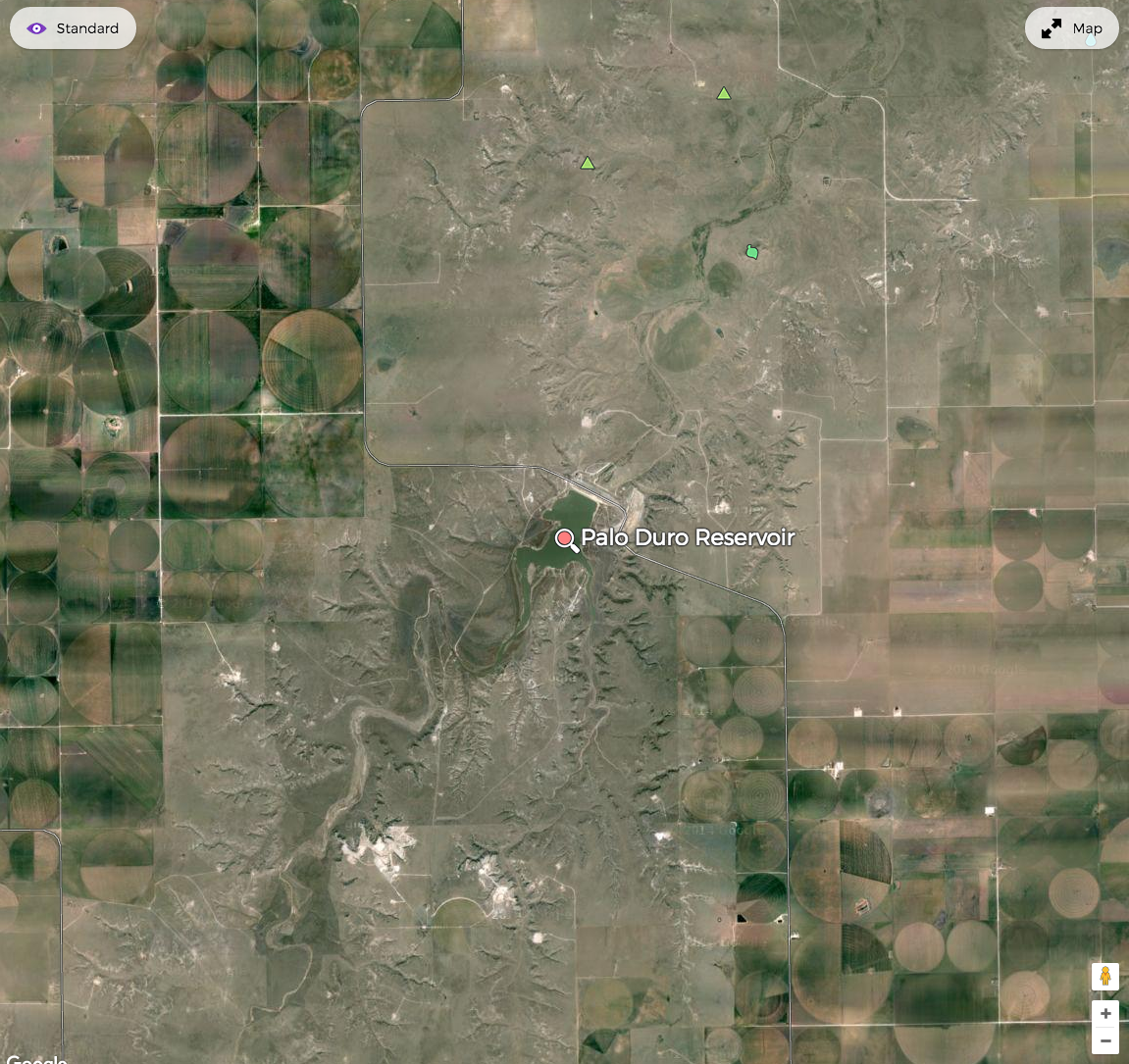 Above: The Palo Duro River Authority constructed a dam on Palo Duro Creek, 10 miles north of Spearman, which created a reservoir that was supposed to supply water to Moore County, Hansford County and the city of Stinnett. As of March 2016, Moore County’s taxpayers have paid $47.2 million dollars to the PDRA but haven’t received any benefits from it. The question now is what does Moore County do about it?

How do you make lemonade out of a 41-year-old lemon? It’s a question Moore County is trying to resolve as it tackles what to do with its involvement in the Palo Duro River Authority. As of March 2016, Moore County taxpayers have paid $47.2 million dollars to the PDRA and haven’t received any benefits from it — water or otherwise.

The Texas Legislature established the PDRA through HB1531, and Moore County joined it in 1975 through HB985. Proponents said the construction of a reservoir would alleviate the demand for water from the Ogallala Aquifer, and in 1985, Moore County, along with Hansford County and the city of Stinnett, voted and passed $22.3 million in bonds to build a dam on Palo Duro Creek that would create the Palo Duro Reservoir. The vote in Moore County passed 465 to 142. Since its inception, the PDRA has received 75 percent of its money from Moore County, and the county was supposed to receive more than 60 percent of its water needs from the reservoir. It hasn’t happened. In fact, not a drop of the reservoir’s water has been pumped out. Why? There has never been enough water in it to pump out, and even if there was, there are no pipelines to get it out.

Moore County Judge Rowdy Rhoades attended a PDRA board meeting in 2013 and told them changes need to be made because Moore County is getting nothing for its money. Nothing changed. Now, though, there is an opportunity to petition the Sunset Advisory Commission and possibly change the role of the PDRA, or even abolish it. For the first time, the Commission is reviewing the PDRA, and its recommendations to the Legislature weigh heavily on its future. The Legislature can abolish the PDRA, revise its role or allow it to function undisturbed. And that is where Moore County can step in.

The Moore County Commissioners’ Court held a special meeting May 11 to get taxpayers’ input about the PDRA and to tell them the entity is under the Sunset Advisory Commission’s review, allowing people to weigh in on the PDRA’s future. Moore County Attorney Scott Higginbotham explained the review, and state Rep. Walter T. “Four” Price, who has served on the Commission, clarified how the review works and how taxpayers can submit their concerns and ideas.

Price said the Commission will hold public hearings June 23 and June 24 in Austin, and Moore County residents can attend them, but Price and Higginbotham said people can and should submit their thoughts about the PDRA and solutions before those hearings. You can submit then online through the Commission’s website.

The Commission is comprised of five senators, five representatives and two members of the public appointed by the lieutenant governor and the speaker of the house. No Commission members currently are from the Panhandle. The history of the PDRA, its evolvement into what it is today and what its future should be is a ball of string local elected officials are trying to unwind in order to present a clear understanding to the citizens. But focusing solely on what the PDRA could be and how to get it to somehow benefit Moore County should be a secondary consideration, Higginbotham says.

Moore County, even though it paid 75 percent of the bond and now pays 75 percent of the dam’s maintenance costs, has only four board members on the PDRA out of nine. That number is set by the Legislature, and Higginbotham says that increasing board representation should be one of Moore County’s first considerations. He recommends the county petition for one of following options before considering what the PDRA could become: 1.) The Legislature allows Moore County additional board members to reflect its burden of the majority of the costs to build the reservoir and maintain the dam and facilities, 2.) Moore County pays less of those costs, 3.) Moore County is allowed to leave the PDRA. Any of those options are possible now that PDRA is under review. 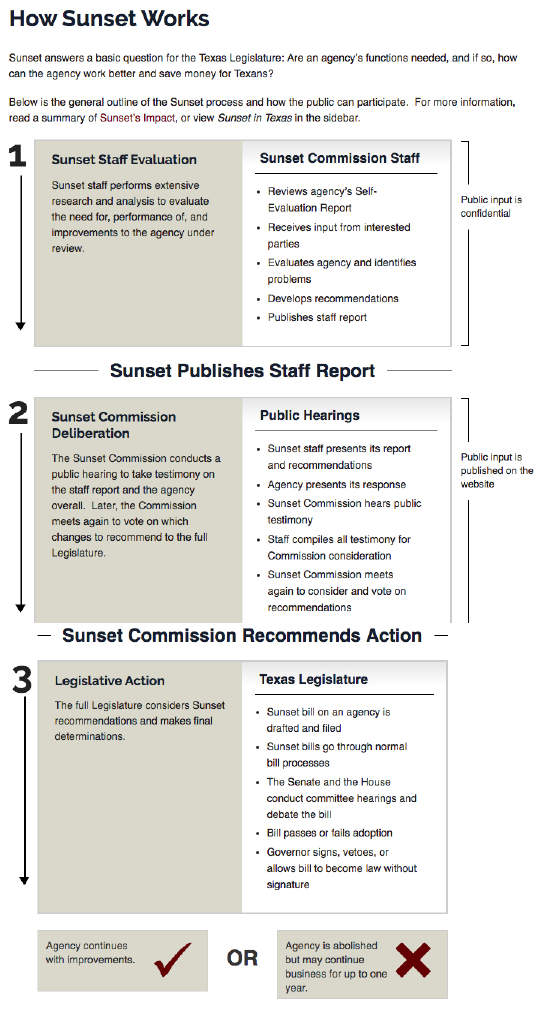 As part of the review, the PDRA had to submit a self-evaluation, which the Sunset Commission staff reviewed. The staff made recommendations and published a staff report that is submitted to the Commission, which will hold public hearings to take testimony on the staff report and the PDRA overall. That, Higginbotham says, is when the public should get involved. The Commission will meet again six to 12 weeks after the June23-June 24 hearings to consider and vote on the recommendations.

The Journal has supplied a graphic that illustrates how the process works, but Higginbotham says that since this is the first time the PDRA has come under the Commission’s review, it is the key time for Moore County to weigh in on its future with the PDRA. Concentrating on how to get the PDRA to be financially self-sufficient and to provide a service to Moore County is a moot point at this time, Higginbotham says.

In the next installment of this four-part series of the PDRA, the Journal will report on the Commission’s staff report. Among its findings the report says, “Neither UCRA nor PDRA provides a formal opportunity for the public to appear and speak before the board.” Also, “PDRA has no website.”

You can read more about the Sunset Advisory Commission here.