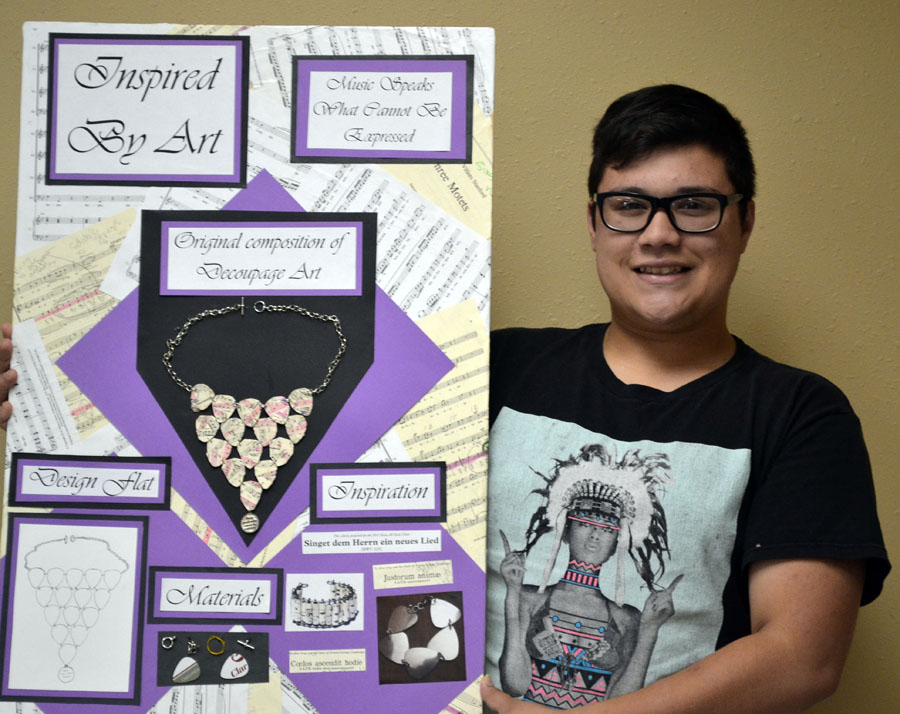 Above: Junior DeLeon holds the storyboard that won him a first place award recently at the Texas 4-H Roundup in College Station.

Junior DeLeon says “he found the leader he could be” in 4-H, and he recently proved it when he placed first in his category at the Texas 4-H Roundup in College Station.

From June 8 through June 12, a group of Moore County young people who had placed at the district level matched their skills against competitors from the other 11 4-H districts in Texas. In addition to DeLeon, who won first place in the Jewelry Fashion Storyboard Category, three other Moore County challengers for the state titles placed in their events.

Yasmine Venzor placed second in the Wearable Category, Monica Hernandez placed third in the NonWearable Category, and Colin Jones placed fourth in the Accessory Category. All of those categories are divisions of the larger Storyboard Category.

DeLeon said he’s been in 4-H only two years, but during that time “he found himself” and says 4-H is “a great opportunity to expand on leadership skills.”

“I figured out it’s better to be a leader with one follower than to be one of thousands of people who are following a bad leader,” DeLeon said.

The 2015 Dumas High School graduate drew on his love of singing and design for the inspiration that resulted in a storyboard that landed him the first place award.

“A storyboard is something like a marketing tool,” DeLeon said. “It’s a breakdown of an idea for a product, and it’s a visual you would use to sell and market that idea.”

DeLeon envisioned a necklace made of guitar picks overlaid with sheet music, and he said the idea hit him “like a hurricane.”

“It just all fell together,” he said.

DeLeon plans to attend Abilene Christian University in the fall and has received several scholarships. 4-H, he says, has helped prepare him for college.

“I’ve learned so many skills in 4-H that will help me in college and through life,” he said. “4-H prepares us to succeed.”

Moore County was well represented at the Roundup, according to Misti Ivins, one of the coaches. All of the competitors earned a shot at state titles by placing at the district level.

The Moore County 4-H coaches are: