Home OPINION Maybe we should just go have a beer 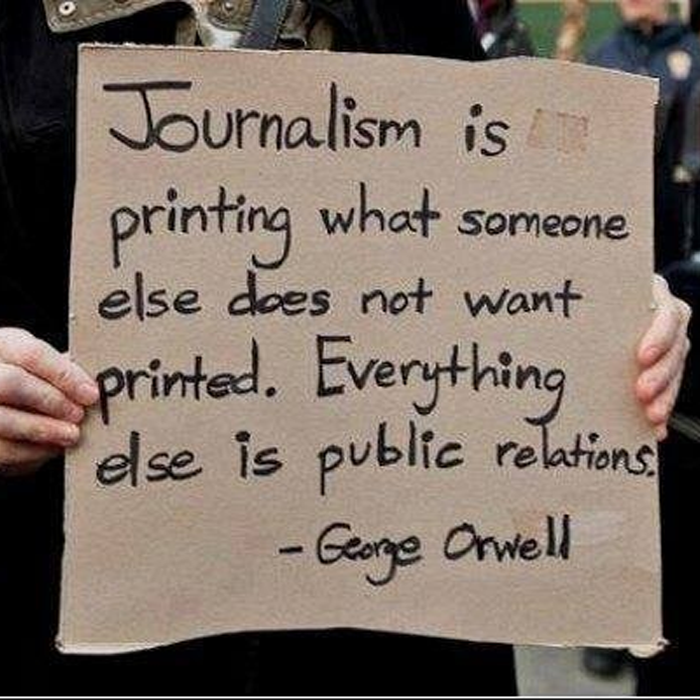 My recent post about the students’ pics set teeth to gnashing and inspired a flurry of indictments, so let’s have a little talk about that. I’m not going to rehash the photo issue because that’s something I’ll take to the school board. What I want to discuss is how I manage the Moore County Journal and my reasons for doing so.

In this country of the free and the brave, we have choices. Some people would rather buy their groceries at United and not at Walmart, and that’s their right. Some people vote Republican and would die before they vote for a Democrat. In this country we can do that. It’s one of the great things about being an American. We have the privilege of choice.

I started the Journal because I was tired of the corporate takeover of the media. It has become difficult for a journalist who believes in the idea of a free press to work for the corporate-owned papers. They care only about the bottom line, journalism be damned. One of the reasons corporate won’t let their papers practice real journalism is because when you do, you sometimes anger people. Well, more than sometimes. Many times. But I absolutely believe a free press is one of the components that keeps the U.S. shining as a country committed to a transparent government. It’s exciting when a journalist is allowed to work for a paper where that philosophy is respected and practiced. But it also comes with responsibility.

The media is often sued, sometimes successfully. Journalists also have gone to jail when they have refused to give up a source to a court that demands it. It’s just not done; protecting a source is one of journalism’s sacred tenets. Add to that the dedication of holding elected and appointed officials accountable and ensuring that our government bodies are operating transparently and are abiding by the open records and open meetings acts, and you have the foundation of journalism. For example, a body must reopen the meeting to the public after executive session. If there is a vote on what was discussed in executive session, it must be done in public. That violation has happened in Dumas. I was there.

Journalism is exciting when it’s practiced as it is intended. Anything else is just marketing. So I started the Journal to get back to the fundamentals of journalism and not work for a paper that’s controlled by advertisers or for one that sells lame special sections whose sole purpose is to sell ads and not deliver a quality news product. I won’t ever guilt an advertiser into buying an ad so “they can support the kids on the honor roll.” If you’re going to use the kids to sell an ad, then at least do the ethical thing and donate part of the revenue to the booster clubs or other organizations set up for the kids.

But I digress. I own the Journal. I can say whatever I want on it, but just as I hold officials accountable, I, too, must be held accountable, and that’s the readers’ jobs. If I publish false information about someone, I can be sued for libel. Editors are trained to read everything to weed out anything that could get the paper sued. The large dailies retain attorneys, and reports that call someone out on misconduct are sent to them for an evaluation. We are always careful not to be sued.

So this is where the choices come in. No one is forced to read the Journal, nor its Facebook page. I would like everyone to read it, and I would like it even more if everyone subscribed to it, but I know it won’t always appeal to everyone. And that’s OK. I will not, I repeat, will not, water down the Journal because I’m afraid of angering someone. If you want that kind of paper, there’s one in town, and they’ll be happy to have your money. The Journal will never be a mealymouthed rag whose only purpose is to sell advertising.

I remember when I started the Journal someone told me there was concern that it would become something of a National Enquirer, that I would be controversial. It’s sad that for decades Dumas hasn’t had a paper that will take a stand on an issue, and the population has come to believe that when one does, it’s controversial. And that’s why I’m writing this editorial. Yes, it’s an editorial. Don’t fly into a panic. Editorials are an important part of a paper, and I don’t write enough of them. I’m going to change that.

I won’t say anything about someone I won’t say to his or her face. I will be transparent, I will be outspoken, and I will put my name to it. When I have something to say, I want people to know I said it. So for those who said I shouldn’t be writing what I did on the Journal’s Facebook page, I can only advise them not to read it. It’s that simple. You have a choice. If I publish a news product you don’t agree with, then go buy a copy of the local print paper. I truly hate to see you go, but there’s the door. I can’t please everyone, and if I tried, the Journal would be a mess of contradictions and vapid content. We already have a paper like that in town. See, I told you I’d be outspoken.

I have weathered some storms to get the Journal this far. The site has been hacked, I’ve lived on beans to ensure the Journal keeps going until it sees a profit, and I’ve spent about 70 to 80 hours a week working on it. I’ve loved every second of it. I love that I don’t have to bow to a corporation that worships at the advertisers’ altars. I love that I can produce a product I’m proud to say has gotten this far because of sacrifice, and the stats show it’s working. The two other news products in town don’t come close to the number of readers the Journal has. With the exception of one, every ad on the Journal is there because the advertisers called me, asking if they could buy space.

I know some of the readers, perhaps many of them, won’t like how outspoken I am. That’s fine. That’s why there’s the comment section on Facebook. That’s where the readers can call me out. That’s where they can challenge me. But if what I’m doing, if how I’m running the Journal offends you, then please go. I would rather spare you the anguish of reading my work than have you as a reader. The News Press’ Facebook page has barely over a thousand likes. They would be happy to have a few more, and perhaps you’d be happier there.

I won’t apologize for coming across as indelicate. I have literally put all I have into the Journal, and I’ll protect it with all I have. I picture the Journal and its readers as a family. Sometimes we’ll laugh. Other times we’ll scream at each other, slam doors and not speak to each other for awhile. Then we’ll be laughing again. We won’t always agree. If you can’t have a reader/Journal relationship like that, then hit the unlike button on the Journal’s Facebook page, forbid your computer from ever pulling up the Journal’s website, and you’ll be fine. Accuse me of what you want, but you can’t accuse me of not having passion. I love journalism, and I promise that if you do want to challenge me, it’s not a problem. In fact, I will be delighted to meet you for coffee or a beer and talk about it. I’m from the school where we can slug it out in the street and then go to lunch arm in arm. No hard feelings, and I hope we’ll understand each other better afterward.

Anyway, my point after all that rambling is to tell you you have a choice. If the Journal offends you, you have my blessings to depart and seek news from other sources. I truly hate to see someone go, but I’ll be damned if anyone can bully me into watering down the Journal. I’ve been through way too much in life to be fearful. I just don’t scare.

I absolutely will make mistakes. Will I apologize? In a heartbeat. Will I offend people? Probably. Will people offend me? You can bank on it. But we must all dry our tears and get on with business. Mine is to put out a product I think will educate you and entertain you. I want desperately to give you the information you need to make informed decisions. I want to tell you what’s happening in your community through reports, stories and pictures. That’s my business.

Your business is to decide if the Journal is for you. If you can take the slamming doors and occasional screaming and then extending an olive branch, we’ll make it. And if need be, they serve coffee and beer at a couple of the local restaurants. I’ll reserve a table.